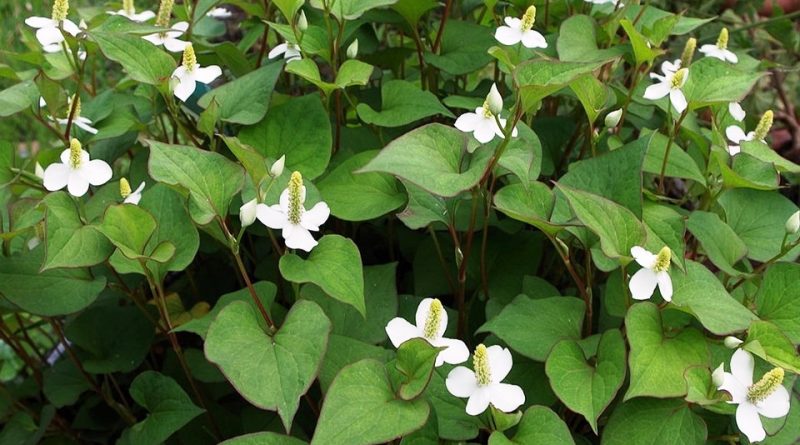 The Chameleon plant (Houttuynia cordata Thunb.) Is a herbaceous species belonging to the Saururaceae family.

Etymology –
The term Houttuynia was given in honor of the Dutch naturalist and botanist Maarten (Martinus) Houttuyn (1720-1798), author of a monumental Natuurlyke Historie.
The specific epithet cordata means heart-shaped, heart-shaped, from cor, cordis heart: referring to the shape of the leaves.

Geographic Distribution and Habitat –
The chameleon plant is a herbaceous species native to Southeast Asia, particularly present in southern China, the Himalayas and Japan; she also naturalized in North America.
Its habitat is that of shrubs and humid places up to 2400 meters in the Himalayas and which is often found as a weed in wet fields. 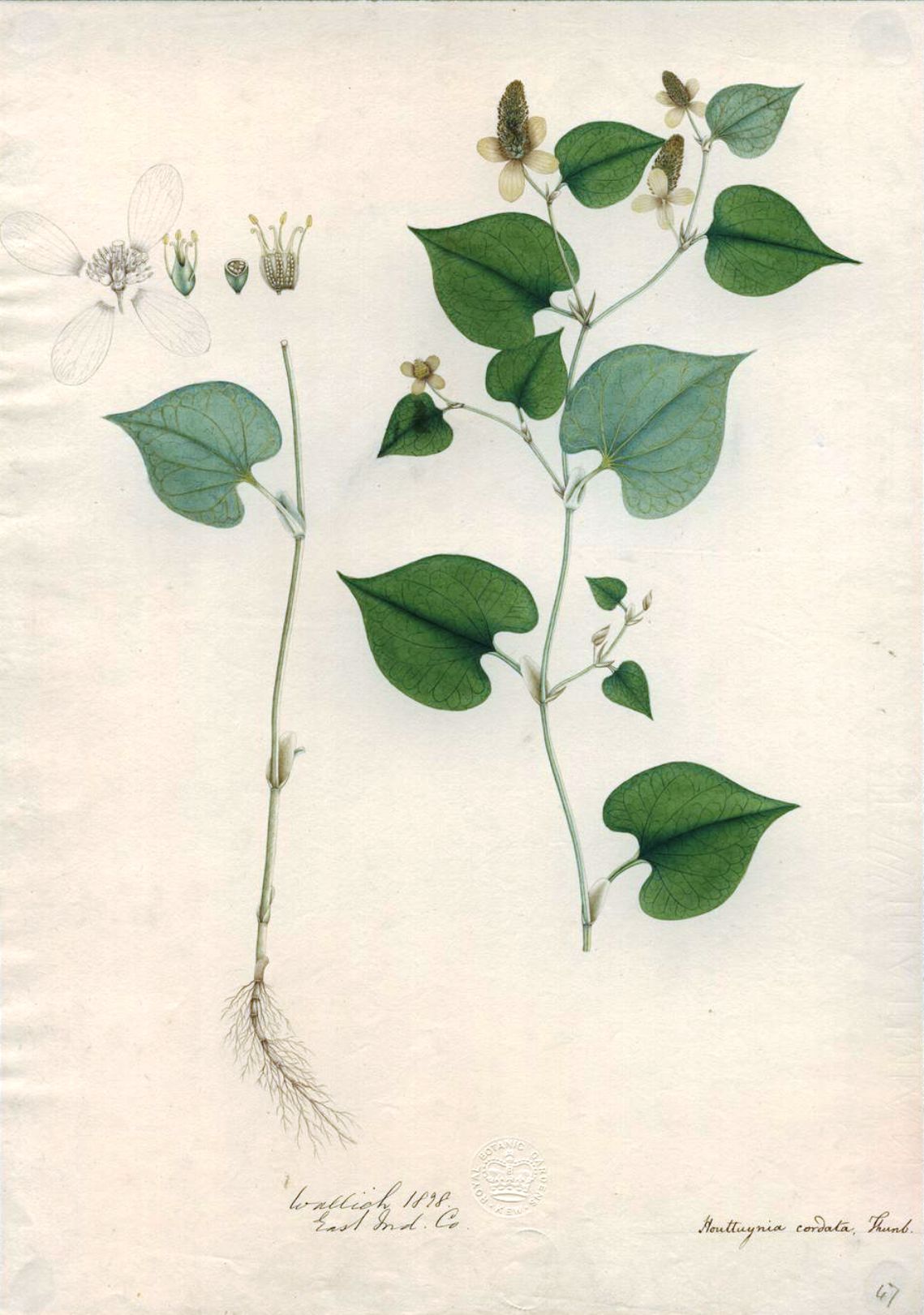 Description –
Houttuynia cordata is a perennial herbaceous plant that can grow up to 0.6-1 meter spreading up to 1 meter in width.
The proximal part of the stem is creeping and produces adventitious roots, while the distal part of the stem grows vertically.
The leaves are alternate, broadly heart-shaped, 4–9 cm long and 3–8 cm broad.
The flowers are greenish-yellow in color and are carried on a 2–3 cm long terminal tip, with four to six large white basal bracts.
The antesis is in the summer period and lasts for a month or more.
The fruit is a capsule that contains many small seeds.

Cultivation –
Houttuynia cordata prefers soil that is moist or moist or slightly submerged in water, as long as it is partially or completely exposed to the sun.
This plant can become invasive in gardens, due to its ability to regrow rhizomes from any segment of its foliage, and is difficult to eradicate as its roots are deep and actively spreading.
It is usually found in one of its forms grown in temperate gardens. The ‘Chameleon’ variety is slightly less vigorous than the parent species, with thicker leaves streaked with both yellow and red. Another common variety, ‘Flore Pleno’, has masses of white bracts and retains the vigor of the parent species.
During the winter, all the aerial vegetation withers while the new buds protect themselves from the root system in the soil.
It can also be grown in shallow pond water or one.
Propagation is by division.

Customs and Traditions –
Houttuynia cordata is a plant that, thanks to its versatility, is widespread all over the world as a garden plant, for moist soil, ornamental pond as well as for any environment with the presence of water.
It is a plant that can also be used for submerged flow phytodepuration plants with a dry soil substrate and a lower water level.
This plant is traditionally grown as a leaf vegetable and is used as a garnish for fresh herbal dishes. The leaves have an unusual flavor that is often described as “fishy” (also earning the nickname “fish mint”), so it is not as universally appreciated as other aromatic plants.
In northeastern India, it is commonly used in salads, sauces or cooked with other vegetables and as a garnish on side dishes. The tender roots can also be ground into mustards along with dried meat or fish, chillies and tamarind. It is eaten raw, as a salad, and cooked together with fish such as fish curry. In Japan and Korea, its dried leaves can be used as a tea.
In Vietnamese cuisine, it is called Giấp cá, and is used with grilled meat and pasta salad dishes. This plant can be used as a garnish for various Vietnamese dishes, such as stir-fried beef gỏi cuốn.
Zhe’ergen (which is the edible rhizome of Houttuynia cordata) is often served as a cold salad after being washed, diced and seasoned with sauces derived from vinegar, chilli, coriander and soy sauce.
Zhé’ěrgēn (Chinese: 折耳根, “broken ear root”) made from this plant (in Chinese yuxingcao, 鱼腥草 “fish-scented leaf”) with a fresh, spicy and peppery flavor is used in the cuisine of Southwestern China, namely that of Guizhou, Sichuan, Yunnan and western Guangxi. The leaves are typically eaten in Sichuan and the root in Guizhou. Fried Zhé’ěrgēn with “la rou” (a dried meat that looks like “Chinese bacon”) is one of Guizhou’s staple dishes. among the most common uses we remember:
– part of Guizhou’s vast fried rice cuisine;
– dressing for migan and mixian noodles if served in broth;
– as a component of the dipping sauces used with the Shiping and Jianshui tradition of grilled tofu;
– raw consumption as part of cold salads, when it is most frequently combined with coriander, vinegar, fresh chilli and soy sauce.
The leaves, which are also a little peppery, are often eaten in the region.
However, Houttuynia cordata is also used in traditional medicine. This plant has also been used in traditional Chinese medicine, as of 2018, by Chinese scientists in an effort to treat SARS and various other ailments, although there is no high-quality clinical research to confirm that such uses are safe or effective.
Among the contraindications it should be remembered that when this plant is administered by injection it can cause severe allergic reactions.
Chemical compounds that contribute to the aroma of H. cordata include β-myrcene and 2-undecanone.

Preparation Method –
Houttuynia cordata is widely used in the food sector where buds and tender leaves are used, raw or cooked as an aromatic herb.
The leaves and young shoots are harvested in spring when they are about 8 cm long.
The perception of the aroma is very subjective and there are those who appreciate it, stating that it has an aroma similar to orange, and those who perceive an unpleasant smell of fish.
A report says there are two distinct chemotypes of this species. The plants of Japan have an orange scent, while those of China have a smell reminiscent of coriander leaves (Coriandrum sativum, L. 1753).
In addition, the aroma varies greatly depending on the time of year. In spring and summer it tastes very acceptable, but in autumn a marked bitterness occurs.
The roots are also eaten cooked.