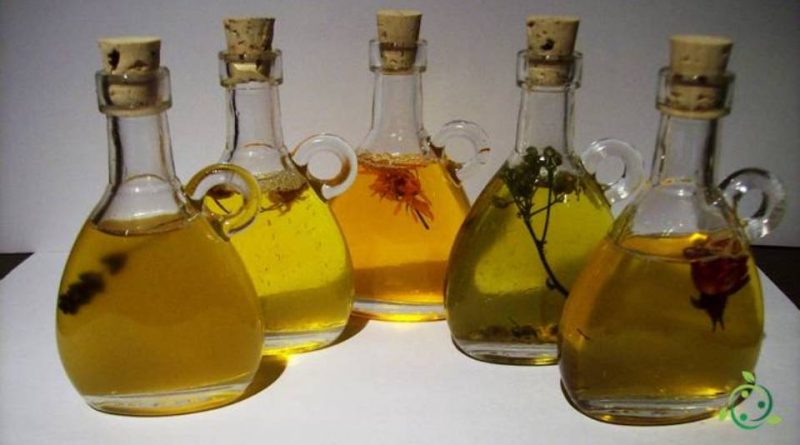 The term oleolite means a preparation that uses oil as a solvent to extract fat-soluble active ingredients by cold maceration.
In the oil, the fresh drug, which is appropriately chopped to increase the exchange surface, is macerated in vegetable oil.
Once the active ingredients have been extracted, filtration is carried out; in this way an oleolite is obtained, an oil enriched with fat-soluble substances extracted from the drug, such as essential oils.
Given this enriched feature, the oil is generally referred to as a condiment, as it should not be used for cooking, but only to season dishes.
A classic example of oleolito is represented by pepper oil, used to season dishes such as pizza; In this case, vegetable oil also extracts capsaicin from the chilli, a fat-soluble substance largely responsible for its spicy flavor.
Oleolites are often oily solutions of the healing phytocomplexes of medicinal plants or flavored seasoning oils.

These can be obtained in solution from fat-soluble fluid extracts, by solar digestion, infusion and decoction, heating the plant until all the water is eliminated.
The oils most commonly used for the extraction of the active ingredients of plants are vegetable oils, mainly composed of triglycerides, such as sunflower oil, rice oil, olive oil, palm oil , but any other oil with a solvent function can be used.
Oleolites are often also referred to as macerated or infused oils but in the most common use, causing ambiguity, they are called oils instead of oleolites followed by the name of the plant, from which for example “hypericum oil” instead of “hypericum oleolite”.
In herbal medicine, oleolites are used mainly externally, even for frictions or massages: applied to the skin they form an oily film on the skin surface, which can have various purposes: emollient, soothing, anti-inflammatory and healing (such as hypericum oleolyte or calendula), or anti-inflammatory and anti-rheumatic for sports massages (such as arnica oleolyte).
The group of medicated oils must also include oleolites for rhinobalsamic instillations: rich in essential oils, they must be applied to a cotton pad (a few drops) or diluted in hot water (fumigations).