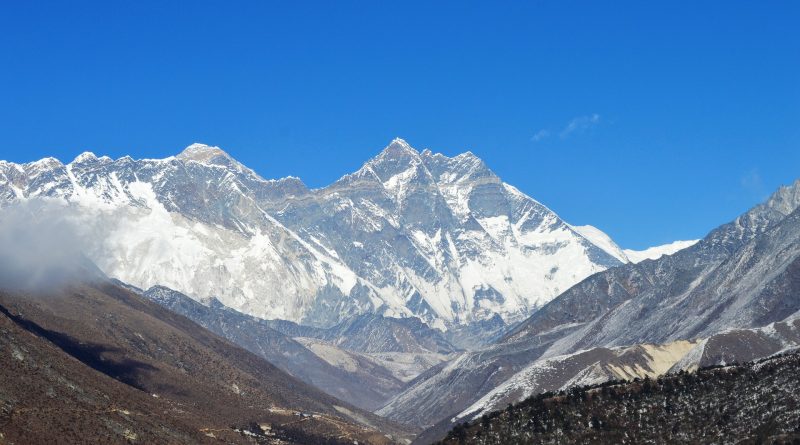 Mount Everest is the highest peak on the Asian continent and on Earth. It has an elevation of 8848.86 m s.l.m. and is located in the Himalayas together with other eight thousand, on the border between China and Nepal, thus falling within the so-called Seven Peaks of the Planet.
The mountain par excellence takes on different names also according to many traditions and historical events.
The mountain is called Chomolungma (mother of the universe) in Tibetan and Zhumulangma (珠穆朗瑪峰 pinyin: Zhūmùlǎngmǎ Fēng) in Chinese. The Nepalese name Sagaramāthā (सगरमाथा, in Sanskrit “god of the sky”), which falls within the homonymous Sagaramāthā National Park, was invented by the Nepali historian Baburam Acharya and officially adopted by the government of Nepal in the early sixties.
In 1852 it was then called “Cima XV”. The name commonly used today was introduced in 1865 by Englishman Andrew Waugh, general topographer of India, in honor of his predecessor Sir George Everest, who in the service of the British crown worked for many years as head of British geographers in India.
From a morphological point of view, Everest has the shape of a pyramid, with three walls (north, east and south-west) and three ridges (north-east, south-east and west). The border line between China and Nepal passes along the west and south-east ridges, so only the southwest wall is Nepalese.
The three walls are:
– north face (Chinese): overlooking the Rongbuk glacier;
– east wall (Chinese): overlooking the Kangshung glacier;
– southwest wall (Nepalese): overlooking the Khumbu glacier.
The three crests are instead:
– north-east ridge: divides the north and east walls and starts from the Rapiu La pass (6 548 m). In the middle of the ridge the north ridge branches off and proceeds north to the North Col (7 066 m) which connects it to Changtse (7 543 m). The north ridge thus divides the Rongbuk glacier into an eastern and a western part;
– south-east ridge: divides the south-west and east walls and starts from the South Col (7 906 m) which connects Everest with Lhotse (8 516 m);
– west ridge: divides the north and south-west walls and starts from the Lho La pass (6 026 m) which joins Everest with Khumbutse (6 636 m).
As mentioned, Mount Everest falls entirely within the Sagarmatha National Park which is the highest national park in the world, located above 3,000 m. This park encompasses three peaks higher than 8,000m, including Mount Everest. Therefore, most of the park area is very rugged and steep, with its terrain cut by deep rivers and glaciers. Unlike other lowland parks, this park can be divided into four climatic zones due to the increase in altitude.

Flora –
In Everest, as the altitude goes, the vegetation formations become increasingly sparse until they disappear completely but at lower altitudes there are different vegetation formations due to the considerable difference in altitude.
The climatic zones include a wooded lower zone, an alpine scrub zone, the upper alpine zone which includes the upper limit of vegetation growth and the arctic zone where no plants can grow. The types of plants and animals found in the park depend on the altitude.
In the lower wooded area, birch, juniper, blue pine, fir, bamboo and rhododendron grow. Above this area all the vegetation appears to be dwarf or shrubs. As the altitude increases, plant life is limited to lichens and mosses. Plants stop growing at around 5,750m and this is the permanent snow line in the Himalayas.
Sagarmatha National Park is one of the most beautiful places on earth, especially in summer. After the first monsoon rains in June, different types of plants grow rapidly.

Fauna –
On the slopes of Mount Everest, at lower elevations, the slopes turn green and different varieties of flowers begin to bloom and the butterflies of a myriad of species appear in different colors.
Due to the presence of insects in the environment, many types of birds can also be seen in the park. 118 bird species and 26 butterfly species have made this park their home.
Some of the endangered animals found in this park are musk deer, wild yak, red panda, snow leopard, and Himalayan black bear. In addition, there are many other animals in the park such as Himalayan thars, deer, langur monkeys, hares, mountain foxes, martens and Himalayan wolves. However, their numbers are not very large and many visitors may not be able to see them.
With increasing altitude, oxygen thins and the animals, therefore, found here are adapted to live with less oxygen and with a cold temperature. They have thick layers to retain body heat. Some of them have shortened limbs to prevent loss of body heat. Himalayan bears hibernate in caves during the winter when there is no food available.