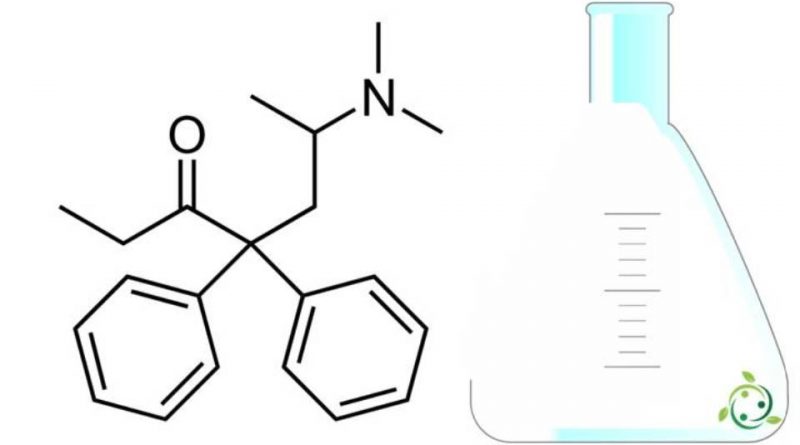 Methadone, whose term in the official IUPAC nomenclature is RS 6 dimethylamino-4,4 diphenyl-3 heptanone, is a synthetic alkaloid and opioid.
Methadone has a brute or molecular formula: C21H27NO.
Methadone, known by several names such as: Polamidon, Heptadone, Dolophine, etc., is used in medicine as an analgesic in palliative care and used to reduce addiction in drug addiction replacement therapy.
Methadone was first synthesized in Germany in 1937; although this molecule is chemically different from morphine or heroin, it acts like these primarily on the μ-opioid receptor (pure agonist) with similar clinical effects.
In 2005, the World Health Organization (WHO) included methadone in the list of essential drugs, too, for its well-documented efficacy in drug addiction therapy.
Methadone, unlike heroin which is obtained from semi-natural substances produced synthetically from the alkaloids of opium, such as morphine, is a substance produced entirely synthetically.
The chemical synthesis process of racemic methadone is quite simple; this occurs starting from the nitrile, through the Kolbe synthesis and with the diphenylacetonitrile which is readily available.
The formation of an L – (+) raceme can be obtained with tartaric acid.
The main uses of methadone are:
– to relieve severe pain in individuals who need to take painkillers around the clock and who cannot take other medicines;
– to prevent withdrawal symptoms in people trying to detox from opiate drugs.
Methadone, being a narcotic, works by modulating the reaction of the brain and nervous system to pain.
In the presence of opiate addiction, it generates drug-like effects, preventing the onset of withdrawal symptoms in individuals who have stopped using it.

Metabolism –
Methadone has two main metabolites:
– 2-ethylidine-1,5-dimethyl-3,3-diphenylpyrrolidine (EDDP);
– 2-ethyl-3,3-diphenl-5-methylpyrrolidines.
These are both inactivated in the liver.
In addition, other metabolites have been described and among these we find metadol and normetadol. It is metabolised by the enzymes CYP3A4, CYP2B6 and CYP2D6, with great inter-individual variability. N-demethylated by CYP 3A4 is an inactive metabolite of methadone.
The liver may also be an important storage site for methadone, which unmodified can often be recycled into the plasma with enterohepatic recirculation. This makes drug dosage management difficult, as this natural reservoir can modify the plasma kinetics of repeatedly administered drug.
The metabolites are excreted in the faeces and urine along with the unmetabolized methadone. Urinary excretion of methadone is pH-dependent, the lower the pH the greater the elimination.

Side effects –
Methadone can cause serious and dangerous respiratory disorders, mainly during the first 72 hours of therapy and whenever the dose is increased.
Among the other possible side effects of this medicine we also find: weakness, pain in the head, nausea, vomiting, loss of appetite, weight gain, stomach pain, dry mouth, tongue discomfort, sweating, redness, problems in urination , mood swings, visual disturbances, insomnia, sexual disturbances, menstrual cycle abnormalities.
It is also good to notify the doctor immediately in the presence of: convulsions, itching, hives, rash, swelling of the eyes, face, mouth, tongue or throat, hoarseness, breathing problems, difficulty swallowing, severe drowsiness, visual or acoustic hallucinations.

Contraindications –
The intake of Methadone must never be stopped abruptly, but only under the supervision of a doctor, who will eventually proceed by gradually decreasing the dose.
This substance, as mentioned, can cause drowsiness and impair the ability to drive and operate dangerous machinery. It can also make you feel dizzy when standing up.
Furthermore, before taking the medicine it is essential to warn your doctor:
– allergies to the active ingredient, its excipients or any other medicine;
– drugs, herbal medicines and supplements taken, remembering specifically to mention antihistamines, Buprenorphine, Butorphanol, Calcium antagonists, Fluvoxamine, medicines against HIV, glaucoma, irritable bowel syndrome, Parkinson’s, ulcer and urinary problems, Nalbuphine , Phenytoin, Rifampicin and St. John’s wort;
– if you are taking MAO inhibitors, even if the intake was stopped in the previous 2 weeks;
– if you suffer (or have suffered) from paralytic ileus, gastrointestinal blockages, low blood pressure, Addison’s disease, seizures, problems that cause problems with urination or diseases of the gallbladder, pancreas, liver, thyroid or kidney;
– if you have ever undergone surgery or have suffered from diseases that alter the passage of the intestine into the digestive system;
– in the presence of pregnancy or breastfeeding;
– the possible effect of grapefruit and its juice on taking the medicine.
Also as methadone can cause constipation; appropriate dietary precautions can help to oppose it.