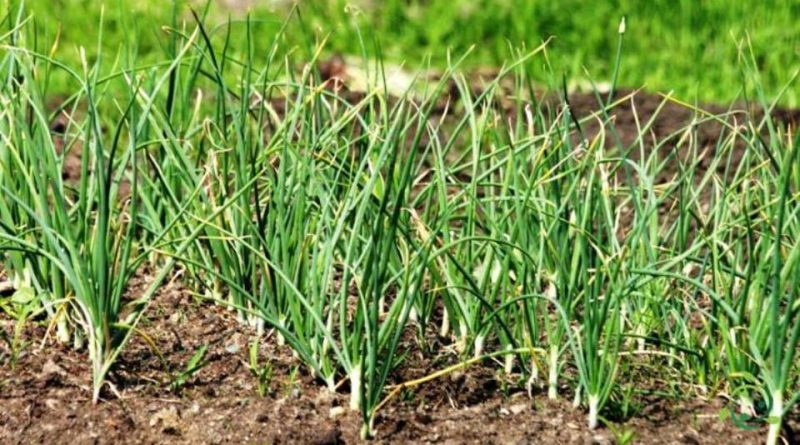 Garlic (Allium sativum L.) is a cultivated bulbous plant of the Liliaceae family.
Garlic, although its diffusion is ubiquitous, has Asian origins (probably from south-western Siberia, from which it quickly spread to the Mediterranean basin.
Garlic is a plant known since ancient times so much so that it was already used by the Egyptians in the third millennium BC and, subsequently, by the Greeks, Romans, Chinese and Indians. Today it is grown on all continents and is well known for its culinary use. In Italy it is grown mainly in Campania, Emilia-Romagna, Veneto and Sicily.
The plant is a hardy perennial, grown as an annual.
Remember that if its main use is as a condiment, it is equally used for therapeutic purposes due to the properties jointly attributed to it by science and popular traditions.

Method of propagation –
Garlic can be grown either starting from seed or from cloves.
The most common method for growing garlic is propagation from the cloves that make up the so-called garlic heads.
For greater success of germination, it is recommended to keep the seeds in the refrigerator for at least four weeks, in order to facilitate the emergence of young seedlings.
Using this system, the soil must be divided into small trenches, to which a layer of about 5 cm of organic matter must be added to enrich the soil. Remember that each single garlic bulb can produce up to eight plants.
To proceed with planting it is necessary, first of all, to separate the individual cloves (cloves), making sure that the white coating film is intact, and then bury the bulbs in rows at least 15 cm apart, at a depth of 2-3 cm, spaced at least 10 centimeters from each other.
During planting, it is essential that each clove of garlic should be positioned with the tip upwards, and after covering the trenches, the surface must be protected, if possible, with a mulch of straw and dry leaves.
For the cultivation technique, see the following sheet.

Propagation period –
As regards the time of planting, the ideal time is from September to December, although in the warmer climates it is possible to arrive even at the beginning of spring. The important thing is that at least six weeks pass before the ground freezes, so that the roots develop before the plants enter dormancy.
A good rule of thumb is to bury the largest and healthiest cloves in autumn in mild climate areas (for pink garlic, to be consumed fresh in spring) and in early spring in cold and humid areas (and for garlic white that can be stored).
Mechanical “sowing” is increasingly used for farm crops and large areas. The transplant must be preceded, even by a few days, by the separation of the cloves from the disk, which can be manual or mechanical.

Propagation by seed –
As mentioned, garlic can also be propagated by seed. However, this technique is a more complicated operation, which takes much longer. In this case, once the plants have bloomed, you need to collect the small black seeds, shake off the ripe, dry flowers, and keep them in a dry place until you sow them.
With this technique it is advisable to keep the seeds, covered with little soil, with a temperature of at least 15 ° C. In spring the seedlings will be planted in full ground, to obtain the bulbs the following year.