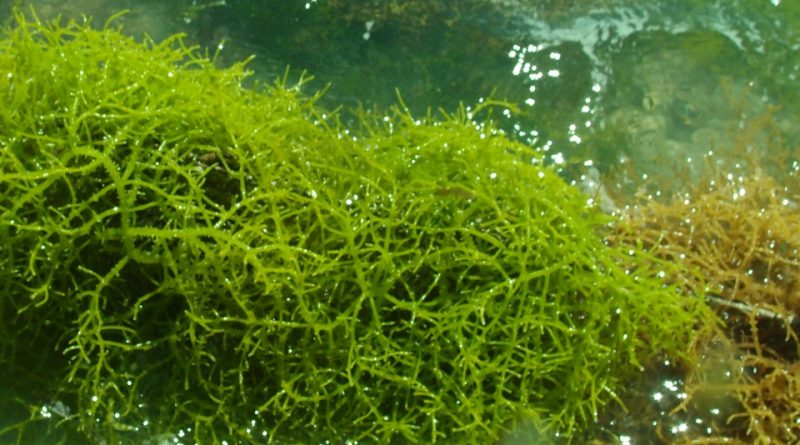 Etymology –
The term Eucheuma comes from the Latin eucheuma, derived from the Greek words eu- εὖ, εὐ-, which means good and from cheuma, χεῦμα, “what is poured”.
The specific epithet spinosum comes from spina spina.

Geographic Distribution and Habitat –
Eucheuma spinosum is an algae native to an area widespread above all at the equatorial level in the Indo-Pacific region, and more concentrated in Southeast Asia.
This species, along with others of the same genus, has been distributed in many areas far from its original natural habitats, including Japan, Hawaii and the islands of the South Pacific.
Its natural habitat is usually that under low tide, growing from sandy areas to rocky bottoms along a coral reef, where water movement is slow to moderate. 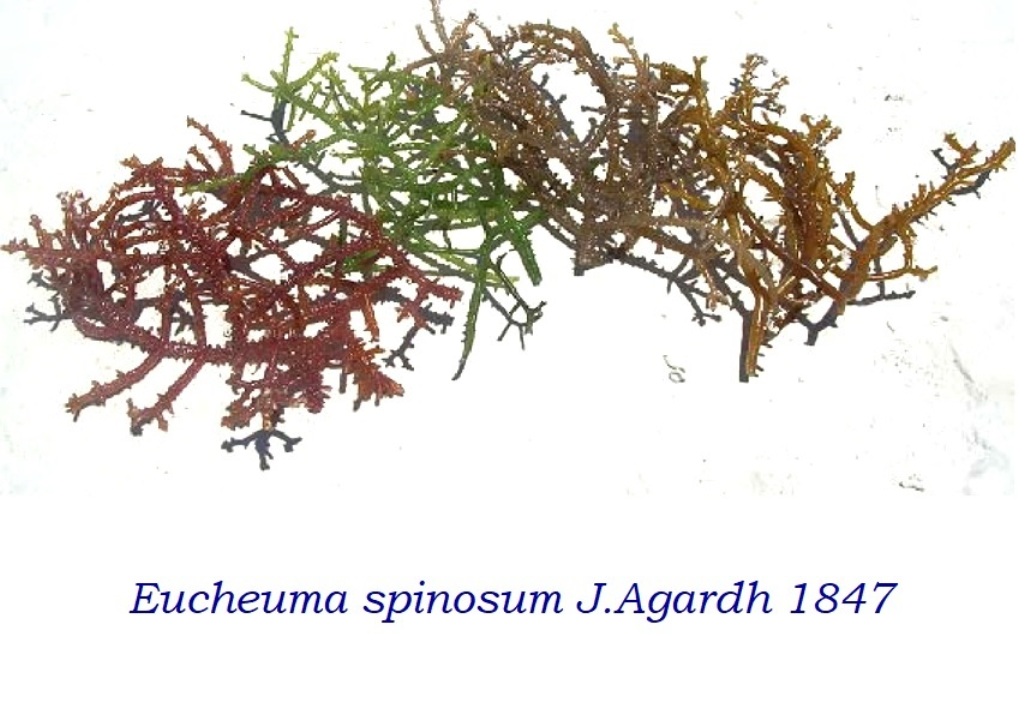 Description –
The growth of Eucheuma spinosum is similar to that of terrestrial plant species and is also capable of dividing to form new growing branches. It also shows a triphasic life cycle, consisting of a gametophyte (n) (dioecious), a carposporophyte (2n) and a sporophyte (2n). Both the gametophyte and the more robust stage of the sporophyte are significant for the development of algae, where their characteristics allow for greater vegetative regeneration.

Cultivation –
This species, together with others of the Eucheuma genus, are cultivated in different parts of the world and are used in the food industry (especially to produce the thickener known as carrageenan) and in that of cosmetics.
The algae are grown in rows, using bamboo sticks or other similar supports as support; the harvest is very frequent.

Customs and Traditions –
The cultivation practice of this kind of algae originates from the Far East and Indonesia (for example the Philippines and Bali), but has since spread elsewhere as well.
Breeding, both of Eucheuma spinosum and Eucheuma cottonii, as raw material for the production of carrageenan, was first introduced in the Philippines in 1967 and became commercially important in 1974, the year during which a production was recorded. total of 8000 tons in dry weight. In 1985 the total production reached 32000 tons in dry weight, consisting mainly of Eucheuma cottonii.

Preparation Method –
Carrageenan is extracted from this seaweed which is a gelatinous substance of wide use in food, medicine and industry (used to clarify honey, beer, for the manufacture of paper, dressings and more). This substance is obtained by boiling some algae.