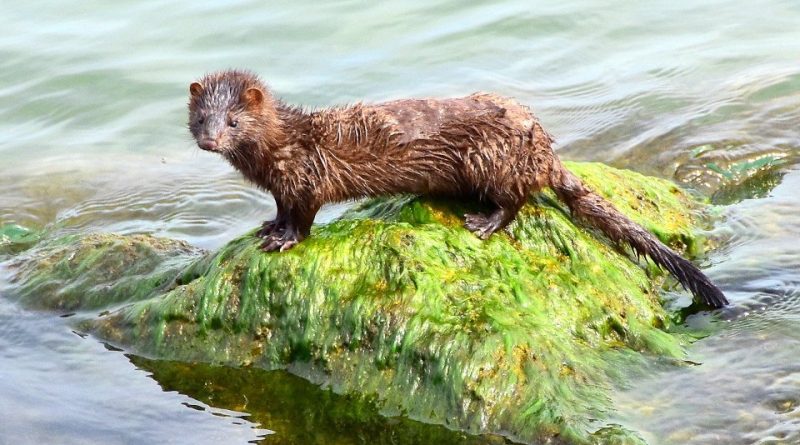 The American mink (Neovison vison Schreber, 1777) is a mammal belonging to the Mustelidae family.

Geographic Distribution and Habitat –
The American mink is a species native to North America, where with about fifteen subspecies it occupies a vast range that includes the United States and most of Canada, with the exception of Arizona and most of Canada south of the Arctic Circle. The species has also been introduced to Newfoundland.
From the second half of the nineteenth century, intensive farming began for the exploitation of its precious fur.
In 1866 the domestic subspecies was selected, obtained from the targeted crossing of the three subspecies ingens, melaminepeplus and vison, chosen for characteristics of size and quality of the hair. The American minks thus obtained were imported in large quantities in intensive farms that arose in various parts of Asia, South America and Europe.
Soon, wild populations of these animals were created, due to the accidental flight of animals from farms or encouraged by the government itself (for example in the then Soviet Union). These first accidental spreads have recently been added by those linked to animal rights raids. It is estimated that in total more than 30% of animals in captivity manage to escape from the cages or to and be released.
Numerous specimens over the years have thus been released in an allochthonous environment, often already colonized by other conspecifics escaped from farms.
These populations have often come into conflict with the European mink (Mustela lutreola Linnaeus, 1761), often to the detriment of the latter, which is why it is considered an invasive species.
In Italy, which has been imported since the 1950s, it is widespread in the areas surrounding the large farms in the North, as well as in Sardinia (Flumendosa, Lake Omodeo). These are often non-autonomous populations from the reproductive point of view.
The habitat of the Neovison vison is that of the environments in which the species can be in contact with water (streams, lakes, swamps, etc.), preferring coastal areas with dense riparian vegetation but proving to be extremely adaptable. 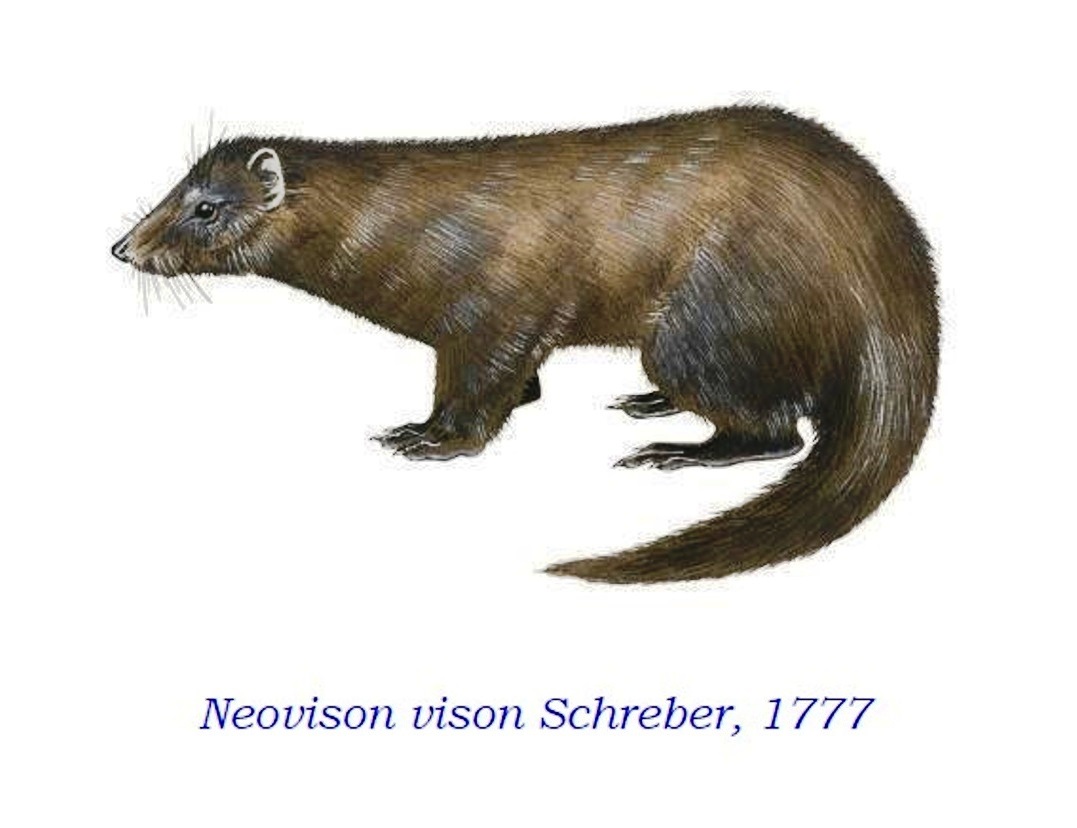 Description –
The American vison is a carnivorous mammal that reaches a length of 60 cm, of which 15 cm of tail, for a weight of 1 kg. Sexual dimorphism is present with males that are heavier than females of about 25%.
This animal has an elongated and slender body.
The thick coat with a silky appearance, due to the oily substances that make it waterproof, which covers the body, has a uniform color ranging from brown to black, with different shades of color for the domestic breeds; it also has a characteristic white spot on the chin. Under the top coat there is an additional layer of soft and insulating undercoat.
Its legs are short with the presence of partial interdigital membranes that are adapted to movement in the water.

Biology –
The Neovison vison is a mammal that reproduces only once a year. In the northern hemisphere, mating usually takes place in the period between February and March, with the young born in May. The female gives birth to a litter of 6-7 young.
They become independent and disperse when they reach four to five months of age, and they reach sexual maturity at 10 months.
In life, the life expectancy of these animals is about 3-4 years, while in captivity they can live up to and over 10 years.

Ecological Role –
The American mink has remained the only living species of the genus Neovison, recently separated from Mustela; In fact, the marine mink (Neovison macrodon, according to some Neovison vison macrodon) is also ascribed to the genus, which has recently become extinct.
The Neovison vison has mostly nocturnal habits; in fact during the daytime hours it sleeps in burrows near the river banks which it never digs alone, but obtains by occupying the shelters of other aquatic species (especially the muskrat), driving away or killing their legitimate owner. This animal, inside its den, if not already present, accumulates dry grass or animal hair, often using the fur or feathers of its prey.
This species is solitary and the males are particularly intolerant towards conspecifics of the same sex: the territories of males and females can instead overlap in the peripheral areas.
The characteristic of these animals is that of marking their territory with subcaudal glands that emit a musky-smelling secretion; this expedient also serves to avoid trespassing of individuals of the same species and episodes of intraspecific aggression.
The extension of the territory varies depending on the availability of food and the number of dens in which to settle in the area.
They are excellent swimmers and can travel underwater up to 30 m, reaching up to 5 m of depth: their poor ability to store oxygen and their poor vision under water make them relatively inefficient at underwater hunting.
From the food point of view it is a carnivorous species: it can hunt indifferently on land and in water, as well as being able to occasionally climb trees to reach prey. It feeds on what it can find, the following are part of its diet: fish, crustaceans, frogs, molluscs, water birds, eggs, rodents, even if the diet tends to vary considerably depending on the season; generally it tends to feed more on fish in winter and on birds and small rodents in other seasons.
From an ecological point of view, its introduction into entire territories makes it enter into competition with other species, especially with the Mustela lutreola but also with the otter and the skunk. It also exerts a strong predatory pressure on some native species, such as the coot and the water wanted, causing a drastic reduction in numbers in areas where the populations of this species have high densities.