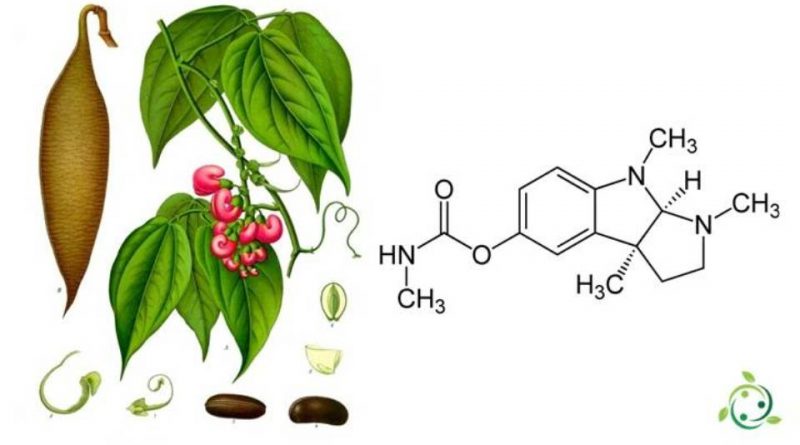 Physostigmine, whose term in the official IUPAC nomenclature is: [(3aR, 8bS) -3,4,8b-trimethyl-2,3a-dihydro-1H-pyrrole [2,3-b] indole-7-yl] N -methylcarbamate, is an alkaloid of natural origin.
The physostigmine, also called hexerine, has a brute or molecular formula: C15H21N3O2.
This parasympathomimetic alkaloid is derived from the seeds of the Calabar bean (Physostigma venenosum Balf., 1861) and acts as a reversible inhibitor of acetylcholinesterase.
Physostigmine was once used by the people of Calabar, Nigeria, in some judgments in which the person suspected of having committed a crime was forced to ingest a decoction. If the person survived this proved his innocence, vice versa it was a sign of his crime.
Physostigmine was discovered in 1863 by J. Jobst and Otto Hesse, while it was subsequently synthesized by Percy Lavon Julian and Josef Pikl in 1935.
Physostigmine is used in pharmacology, as mentioned, for its characteristic of reversibly inhibiting acetylcholinesterase, an enzyme that is inhibited by a carbamylation reaction.

This substance decomposes in aqueous solution and is used in ophthalmological therapies for the treatment of glaucoma and as an antagonist of atropine (atropine dilate pupils).
Physostigmine is used against anticholinergic poisons and also shows efficacy against diseases such as Parkinson’s disease and Alzheimer’s disease, as, by inhibiting the demolition of the chemical mediator of acetylcholine, it causes an increase in its cerebral concentration. This relieves the symptoms of diseases that involve the demolition of cholinergic neurons.
Its use, due to its toxicity, must be done under strict prescription and supervision by the doctor and among the side effects it should be noted that of causing diarrhea.