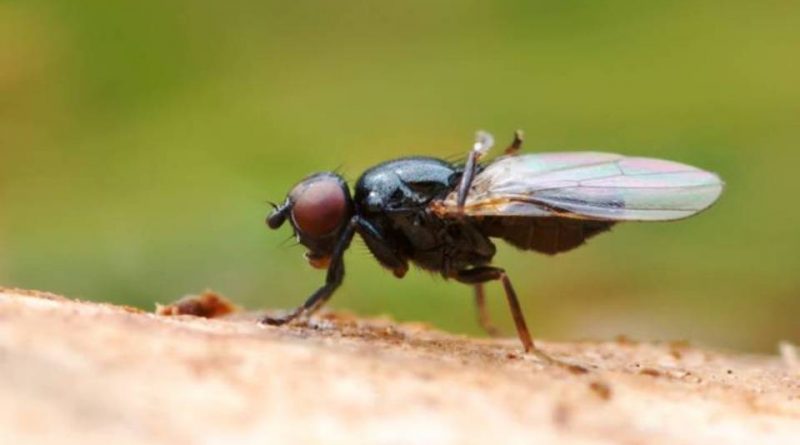 Geographic Distribution and Habitat –
The cheese fly is a detritivorous species that feeds on decaying material.
Its feeding substrates are often represented by dried or processed meat (including raw hams, bacon and salted beef), also smoked fish and aged cheeses (in general on products with high protein content).
The larvae of this fly can when consumed, can survive in the intestine, causing enteric myiasis.
Specimens of Piophila casei have been found on Egyptian mummies and their characteristic of eating also decomposing material means that they are taken into consideration in Forensic Entomology to determine the time of death.

Morphology –
Piophila casei is a small 4.5 – 5 mm long midge, with a metallic dark brown color and red compound eyes.
It has very short antennae and sucking mouthparts.
The thorax has distinct rows of hair and bristles, also present laterally on the body.
The abdomen is elliptical.
The front wings are membranous and the hind wings (as in all Diptera) are transformed into rockers, structures suitable for stabilizing the flight.
The thin legs are yellowish in color and covered with short spines.
The abdomen is also dark in color and covered with sparse hair.
The larva is 9-10 mm long, with a white-yellowish color, mouthparts of a dark color tending to black, of particular shape consisting of two hooks curved downwards, used to scrape the substrate and remove small pieces of food. The appearance is cone-shaped, wide at the rear end and narrow at the front.
The pupa is dark brown, with an oval puparium, 3-4 mm long and about 1.5 mm wide.
The eggs are oval in shape, 0.6-0.7 mm long and 0.2 mm wide, pearly white in color.

Attitude and Life Cycle –
The biological cycle of Piophila casei begins with the laying of eggs, in number of 140-500 per female, directly on maturing meats, cheese, smoked fish. The eggs hatch in 23–54 hours, when the temperature is between 15 ° C to 27 ° C.
Larval development takes about 14 days.
The newborn larvae are already active and begin to feed themselves by digging tunnels through which they immerse themselves in the substratum; if these are brought out they are able to jump using the buccal hooks. They also shy away from the light and have a tendency to aggregate.
Once at maturity, the larvae abandon the substratum they have fed on and pupate about 32 h after reaching a dry and dark place; if they do not have the opportunity to reach the ideal place they can pupate even on the concrete floors. The adult emerges from the puparium after about 12 days. They are not very long-lived, they live from 3 to 7 days.
Optimal development temperatures range from 25 to 30 ° C.

Ecological Role –
The cheese fly is a small insect that feeds on aged food and which can survive, if ingested, inside the human intestine, causing enteric myiasis. It belongs to the group of insects that help to decompose the organic substance.
These larvae are used in Sardinia in the production process of pecorino cheese “Casu marzu”.
Furthermore, larvae of Piophila casei are found in the Sardinian cheese “furmai nis”, both of which cannot be marketed.