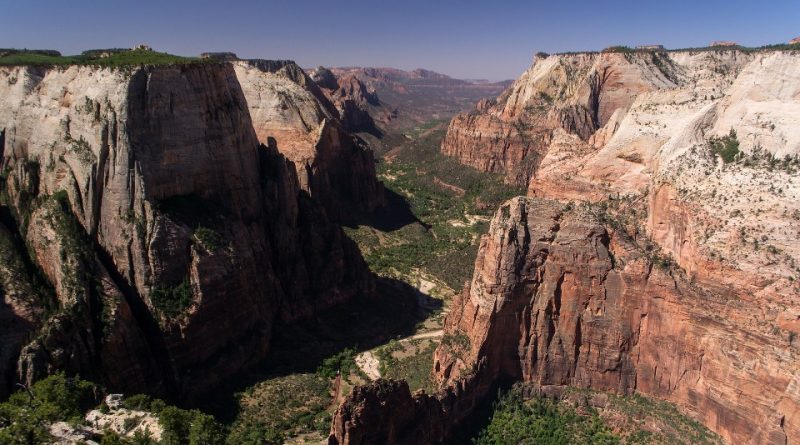 Zion National Park, whose WDPA Code is: 991 is a US park located in the State of Utah. This park has an area of ​​593 km² and an altitude ranging from 1.128 meters above sea level. of the Coalpits stream bed at 2,660 meters of Mount Horse Ranch and extends into the Markagunt and Kolob highlands, at the meeting point of three geographic regions of North America: the Colorado Plateau, the Great Basin and the Mojave Desert. The northwestern part of the park constitutes the section of the Kolob Canyons.
Zion National Park takes its name from the Zion canyon, a 24 km long and 800 m deep gorge carved by the North Fork Virgin River.
In 1909, in order to protect the canyon, the Mukuntuweap National Monument was first established, which was later transformed into Zion National Park in 1919. The section of Kolob Canyons, declared a national monument in 1937 and initially distinct from the park , became part of it in 1956.
The park is little known because of its winding roads and because it is not considered a popular tourist destination, but it is a place dedicated to sports enthusiasts such as mountaineering, free climbing, canyoning. Enchanting sceneries frame the park, thanks to the countless colors of the rocks and the cracks that form over the years.
There is no shortage of guided tours or horseback riding and it is also possible to participate in organized evening activities.
Geography –
Zion National Park, located in southwestern Utah, 43 miles west of St. George, is Utah’s oldest and most visited national park, hosting an average of 2.5 million visitors annually. The park’s main attraction is Zion Canyon, at the south end, which displays beautiful rock monoliths and eroded canyon walls cut by the Virgin River over time.
Some of the best known natural wonders are the 2,200-foot Great White Throne, its most famous landmark, the Court of the Patriarchs, Angel’s Landing, and the Guardian, which guards its south entrance. Three of the canyon’s most famous trails, which offer visitors stunning views of these formations and others, are Emerald Pools, Weeping Rock, and Riverside Walk (also known as “Gateway to the Narrows”).

Climate –
The climate of Zion National Park features a landscape, flora and fauna that are practically unique in the United States
In spring the weather conditions are very variable, with a prevalence of days with disturbed and humid weather, alternating with hot and sunny days. Rainfall is heavier in March.
In summer the daytime temperature fluctuates between 35 ° C and 43 ° C but at night the thermometer drops to 18 ° C – 20 ° C. From mid-July to mid-September afternoon thunderstorms are frequent, which can cause flash floods in waterways.
In the autumn days are usually clear and warm while nights are cool. At higher altitudes the trees take on their autumn colors in September, while at the bottom of the Zion Canyon the autumn season begins in late October.
Winters are usually mild, with the possibility of rain and light snow. At higher altitudes, however, snowfalls are plentiful. In clear weather, temperatures are mild, reaching 16 ° C during the day. Night temperatures can instead fluctuate between -7 ° C and 4 ° C. Winter disturbances can last a few days and make roads impassable due to ice.

Geology –
The geological history of Zion Canyon begins about 260 million years ago in the shallow coastal waters of a large tropical Permian ocean located at the eastern end of the supercontinent Pangea.
The subsequent sedimentation and lithification cycles superimposed various geological layers on the original seabed. In subsequent epochs, as the superposition of a new layer caused the sinking of the underlying layers, each new surface layer remained at sea level (isostasis).
This sedimentation phase ended around 65 million years ago, when the continuation of the tectonic uplift processes led to the rise of the continental mass that formed the Colorado plateau. Following this uplift, stress-type stresses were determined which led to the fracturing of the plateau and the formation of normal-type faults.
After a period of apparent static phase, 13 million years ago, a new tectonic phase caused the breakup of the Colorado plateau, giving rise to a series of minor plateaus.
The birth of Markagunt, Paunsaugunt, Kaibab, Kaiparowits, Paria and Aquarius highlands is from this period. Their layout is reminiscent of the steps of a huge staircase (Grand Staircase) that goes up from the Grand Canyon towards Bryce Canyon. Zion Canyon is a deep incision in the Markagunt Plateau that lies midway between the Grand Canyon and Bryce Canyon. The oldest layer of Zion is therefore the most recent and superficial layer of Ghent Canyon, while the oldest layer of Bryce Canyon constitutes the most recent layer of Zion, recognizable at higher altitudes. Each geological stratification corresponds to a climatic change in the region, which is reflected in the different composition of the sediment and consequently in the color of the layer.
Thus the original humid tropical climate (Kaibab and Moenkopi formations) was succeeded by a more arid climate and the sea, due to the regional uplift, was replaced by continental areas with the presence of streams, lakes and ponds (Chinle, Moenave and Kayenta formations ). The progressive drying up of the climate led to the formation of a large sand desert from which the Navajo and Temple Cap sandstone formations originated. A subsequent climate change, recognizable in the layers of the Carmel formation, corresponded to the development of a coastal environment with a dry climate . With the subsequent and definitive marine regression, the waterways began to affect the plateaus and their erosion power was favored by the increase in the slope of the riverbed, determined by the subsequent lifting phenomena of the region, and by the abundance of water guaranteed by copious rainfall during the wet seasons.
In the Markagunt plateau the erosive action of the Virgin River has completely removed the superficial layers of the Cenozoic age and engraved the Mesozoic and Paleozoic formations creating the Zion canyon and highlighting a succession of nine geological formations. 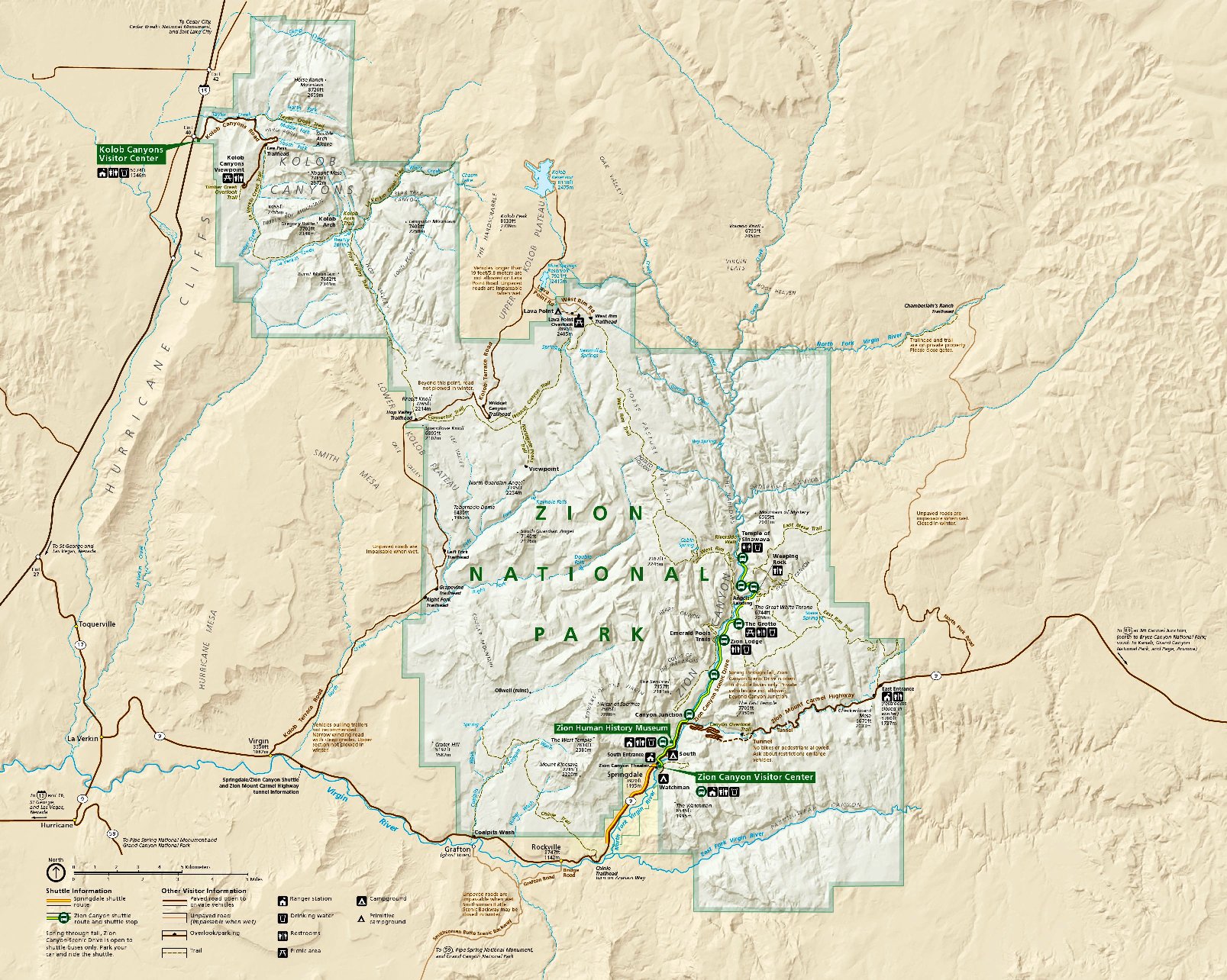 Flora –
The variability of landscapes within the Zion National Park characterizes a high degree of biodiversity.
Additionally, the landscape formed by deep canyons and high-altitude plateaus, a notable variety of soils of different composition and an uneven water availability allow the presence of different habitats that host a large number of plants and animals.
In Zion National Park, there are over 900 plant species, 291 bird species, of which 124 nesting in the park area, 78 mammal species, 44 reptile and amphibian species, 8 fish species. The park is the area of ​​Utah with the greatest variety of plants, from cacti and herbaceous plants typical of desert areas, to shrubs and tall trees. Plants and animals are variously distributed in the four macrohabitats in the park: the desert, the riparian zones, the wooded areas, and the coniferous forests.
Moving on to the lower altitudes, in the bottom of the canyons and in predominantly rocky areas away from water courses, we find species which, over time, have adapted to a desert climate and are typical of the regions of the Great Basin and of the Mojave desert.
There are numerous Cactaceae, such as Opuntia phaeacantha and Opuntia macrorhiza, which grow between shrubs of Artemisia tridentata and A. filifolia, Chrysothamnus nauseosus, Castilleja chromosa and Datura wrightii.
Herbaceous varieties such as Sphaeralcea grossulariifolia with yellow flowers and Abronia fragrans with white flowers grow in the patches of mugwort. Castilleja chromosa and Castilleja scabrida, which grows in rock fissures, have red bracts that hide small green flowers.
Pedological variability also interferes with the floristic diffusion, in fact in the sandy soils rich in selenium there are numerous species of the genus Astragalus, including Astragalus zionis and Astragalus flavus with pink flowers, and other varieties of perennial herbaceous plants such as Stanleya pinnata with yellow flowers. In the inner parts of the canyons, where the continuous flow of water along the rocky walls creates humid microhabitats, the rock is covered with mosses and maidenhair ferns and pink flowered Dodecatheon pulchellum, Aquilegia chrysantha and A. formosa with yellow flowers and l ‘orchid Epipactis gigantea.
Going up in altitude, between 1200 m and 1700 m, the climate becomes cooler which allows the development of sparse forests of Pinus edulis and juniper with patches of Quercus turbinella, ericaceous such as Arctostaphylos pungens with pink flowers, rosaceae such as raven pear and Purshia mexicana. Two species of yucca, Yucca baccata and Y. angustissima.
In riparian areas, forests of black Fremont poplar, American maple, ash and willow grow, while yellow pine, Gambel oak and aspen grow over 1800 m. In the Kolob Plateau there are also forests of Colorado fir and Douglas fir.

Fauna –
The fauna is also affected by the varied geological and climatic components.
Furthermore, most of the animals that populate the bottom of the canyons have nocturnal habits. In these areas are widespread the desert rabbit, the Californian hare and the kangaroo rat of Merriam. Among the animals that carry out an active diurnal life we ​​point out the ground squirrels such as Spermophilus variegatus, pine jays and lizards of the genus Cnemidophorus. Among the predators are the coyote, the bassarisco and the skunk; moreover, often among the vegetation typical of this park it is possible to glimpse a bird: the roadrunner (Geococcyx californianus).
In the park there are also 19 species of bats, 9 species of hummingbirds and 12 species of snakes, of which only the rattlesnake is poisonous.
In riparian areas, beaver and amphibians such as the spotted toad and the canyon tree frog are widespread. Very common among birds is the blue-gray flycatcher and the canyon wren. The waterways are also populated by an endemic species of freshwater fish, the Lepidomeda mollispinis.
Higher up in Zion National Park are the bighorn sheep, which has recently been reintroduced, and the puma, the park’s largest predator, which moves along with herds of mule deer.
In the park, wild turkey is widespread within the coniferous forests and numerous varieties of birds can also be observed, including the Jamaican buzzard, the golden eagle, the white-throated swift, the peregrine falcon, the raven and the American crow.
Finally, it should be noted that the California condor, after being reintroduced in the Vermillion Cliffs in Arizona, has been spotted again inside the park since 1999.