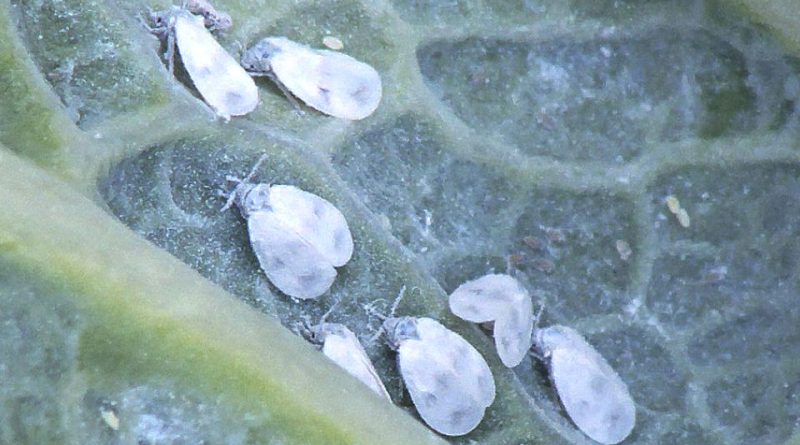 The Cabbage Whitefly (Aleyrodes proletella Linnaeus, 1758) is a small whitefly belonging to the Aleyrodidae family.

Geographic Distribution and Habitat –
The Cabbage Whitefly is an insect present in the northern hemisphere; it is found in some parts of Europe, Asia and Africa, and has spread to North and South America, Australia and New Zealand.
The species is a parasite of various species of Brassica (mainly Brussels sprouts and cabbage) and Fragaria; it also feeds on various wild plants, including Capsella bursa-pastoris and, depending on the country it has colonized, it has also adapted to other plant families such as Umbelliferae and Euphorbiaceae.

Morphology –
The Cabbage Whitefly is a small insect about 1.3-1.5 mm in length.
It has a yellowish body, covered with wax, with the livery of the wings of white color and with three gray spots on each front wing. The head and thorax are dark, while the lower part is yellow and also covered with a layer of wax. The eyes are red.
The nymphs have a flattened shape and greenish color; the body is bounded by a fringe of white wax and measures about 1.5 mm in length.

Attitude and Life Cycle –
The Aleyrodes proletella, depending on climatic conditions, winters as an adult or as a nymph.
The adults lay their eggs, in groups within rounded areas of wax, on the underside of the leaves. The nymphs are born after a few days.
The climatic conditions can favor the annual repetition of this cycle so the number of generations completed in a year is variable in relation to the climate.
There are usually four to five generations per year. The development of a generation ranges from three to six weeks. A female can lay up to 150 eggs.

Ecological Role –
The Cabbage Whitefly, if present with significant infestations, can cause damage to the leaves, especially on the underside, and is caused by the trophic stings of both adults and juveniles.
The attack causes yellowing, deformation and hinders the development of young seedlings; to this is added the abundant production of honeydew by the nymphs which causes the appearance of fumaggini.
However, we remind you that the damage is generally limited, especially in farms and districts that have an agro-ecological management and low use of synthetic substances; in fact the populations of Aleyrodes proletella are kept within acceptable limits by the presence of numerous natural enemies.
The chemical fight against this whitefly, as well as not recommended, is almost never carried out due to the constant and effective control of the populations by natural enemies; among these we remember the Cecidomid and Drosophilidae Diptera, the Coccinellidae Coleoptera and the Aphelinid Hymenoptera of the genus Encarsia.