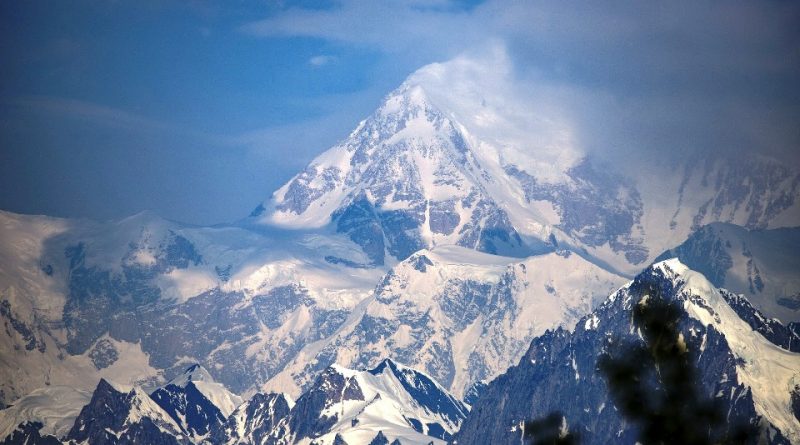 Denali National Park, whose WDPA Code is 969 is a US national park located 382 km north of Anchorage and extends over 400,000 Ha.
Denali National Park takes its name from Mount Denali which is a United States mountain located in Alaska, which is part of the Great Alaska Range, a 960km mountainous arc that stretches across the southeastern part of the state: with its 6190 meters above sea level, Denali is the highest in the country and in the entire North American continent as well as the third in the world for prominence.
This park is the main national park in Alaska and takes its name from the mountain of the same name, which with its 6194 meters is the highest peak in North America.
The history of Denali National Park dates back to 1917, when Charles Sheldon, a naturalist and hunter, founded “Mount McKinley National Park” as a game reserve. Between 1917 and 2015 the official toponym of Mount Denali was McKinley, in homage to William McKinley, 25th President of the United States.
Then we come to the present day, in 1980, when Congress tripled the size of the park, adding over 4,000,000 acres, and renaming it with today’s wording. At the same time, the area was declared an International Biosphere Reserve, important for research on the subarctic ecosystem.
Furthermore, since 1972 access to the park is forbidden to private cars; a bus system is available to visitors.
This area, before the arrival of the Euro-Americans, was inhabited by five different Athabaskan-speaking groups: Ahtna in the east, Dena’ina in the south, Kuskokwim in the west, Koyukon in the north, Tanana in the northeast. The natives led a semi-nomadic life, moving along the major waterways.
Geographically, the Denali National Park is divided into three distinct units:
– Denali Wilderness, an area closed to any type of hunting;
– Denali National Park, which includes the land added to the park in 1980: here the natives can practice traditional subsistence activities;
– Denali National Preserve, where hunting and fishing are permitted under Alaska state regulations. 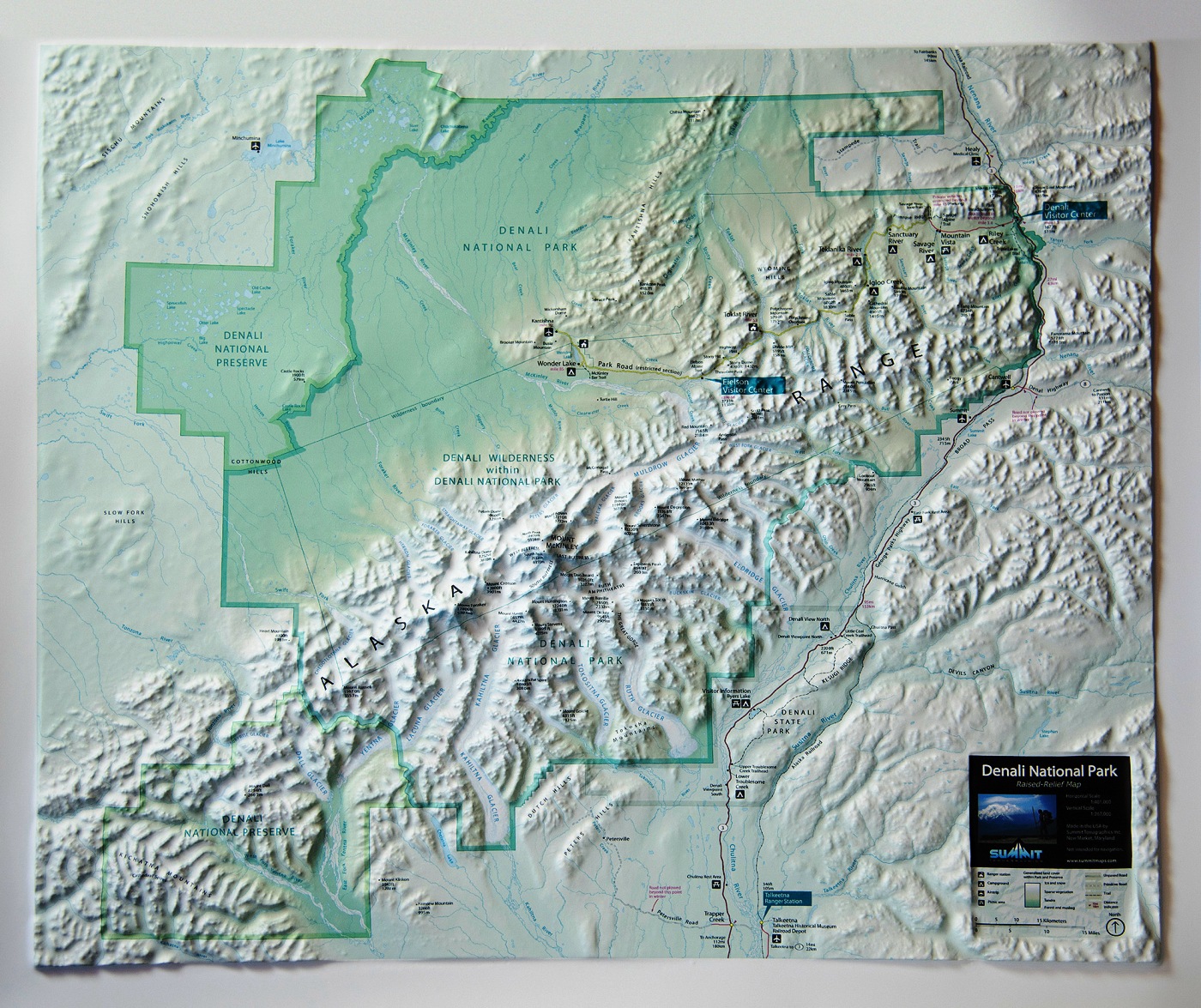 Fauna –
The Denali region is home to a large variety of small birds (167 species) and mammals (39 species). A remarkable amount of black and grizzly bears, alps and wolves, caribou, white bighorn sheep. Just for the latter Charles Sheldon, after his visit in 1907-1908, proposed to the United States Congress to create a reserve for these sheep. Other mammals are lynxes, wolverines, coyotes, foxes and beavers, while the best known birds include griffins, golden eagles and white-headed sea eagles. The only amphibious species is represented by the wood frog.
Among these animals stand out the caribou, the domesticated reindeer of the Old World made famous by the legend of Santa Claus. Interestingly, the caribou and reindeer are the only members of the deer family where both the male and the female have horns. Although hundreds of caribou graze within Denali National Park, their itinerant arrangement makes them relatively elusive. To human observers, the presence of the caribou is indicated by the well-marked paths in the tundra, or by the beaten willows, which the animals have used to rub the velvet from their horns.
Competing with caribou as a wildlife attraction are groups of white Dall sheep. These are among the most captivating large animals to observe in the park.
The elk, the largest member of the deer family, is also the largest animal found in Denali National Park. Large males, called bulls, often weigh more than 450 kg. Moose in the park tend to live in wooded areas near lakes, swamps and other bodies of water. Despite their enormous size, they are skilled and graceful swimmers.
Grizzly bears are one of the largest omnivorous animals in North America and are often seen within the park. These grizzlies can be seen near areas of abundant food, such as berry patches.
Currently, in Denali, there are about 18 wolf packs, consisting of about 100 adult animals. Wolves are known for their distinctive howl, which they use as a form of communication. Biologists are unsure of all the specific reasons why wolves howl, but it appears that they do so before and after a hunt, to sound an alarm and to locate other pack members when they are apart. Wolves howl more frequently in the evening and early morning, especially during winter breeding and pup rearing.
Among the mammals of the Park, there are a total of 39 species, of varying size; from the tiny yellow-cheeked to the 700-pound Alaskan bull elk and they all managed to adapt to the brutal winters. During the cold winter months of December and January, temperatures can drop as low as -45 ° C and a thick layer of snow covers the ground and darkness envelops the landscape. Rodents and shrews (which make up more than half of the park’s mammal species) climb during the summer to store large amounts of food that sustain them during the winter. Red squirrels store spruce cones in piles and burrows on the forest floor. The smallest mammals – mice, voles, shrews, and lemmings – depend on food supplies while remaining active under a protective layer of winter snow. The largest rodent, the beaver, stores a bunch of shrubs at the bottom of its pond; it can be accessed underwater from the lodge when the pond is frozen over. Grizzly bears, black bears, hoary marmots, and arctic ground squirrels escape winter food shortages in a relatively relaxing way. They gorge themselves during the fall and spend the winter sound asleep.
As for the Denali National Park birdlife, this includes a variety of migratory birds that come from all corners of the globe, some even from Siberia, Japan, Hawaii, California, Costa Rica and even Antarctica . Some species, such as the red-throated loon, sandhill crane, and long-tailed duck, only stop briefly in the park before continuing the journey north. Others, including the great horned owl, raven, and willow ptarmigan are year-round residents who court, mate, nest, feed, and raise their young in the park. The abundance of birds in Denali National Park varies with the seasons, increasing significantly as migrants return to the area in the spring and decreasing as they leave for the autumn migration.
We also recall the presence of some amphibians, such as some species of frogs, which use “cryoprotective” chemicals to survive in freezing temperatures.
Finally the fish. Most fish cannot tolerate rivers within Denali National Park, because these bodies of water contain a milky suspension of pulverized silt, known as rock meal, from glacial runoff. However, water streams and freshwater lakes support a number of anadrome and resident fish species. Anadromous fish migrate from saltwater to freshwater to spawn, while resident fish remain in the park’s freshwater year round. At least 14 species of fish are known within the park; These include: chum salmon, chinook salmon, coho salmon, arctic grayling, Dolly Varden, lake trout, northern pike, slimy sculpin, black Alaskan fish, arctic lamprey and long-nosed sucker.

Flora –
Within the Denali National Park, there are over 650 species of plants that produce flowers, as well as mosses, lichens, fungi, and algae. The flora of large areas of the park is conditioned by the presence of permafrost.
Up to 800 meters of elevation, the landscape is characterized by the evergreen forest of the taiga; beyond, the small vegetation of the tundra takes over.
In the park it is not uncommon to see portions of taiga in which the trees are tilted, each in a different direction; the phenomenon is due to the melting of the underlying permafrost, and has been baptized drunken forest, drunken forest.
In general, the vegetation of Denali National Park is a mosaic of taiga and tundra ecosystems that is divided into three zones: lowland, subalpine and alpine. The lowland area is below 750 meters, is mostly wooded and occupies areas under the permafrost, mainly north of the Alaska Range ridge. Common undergrowth lowland shrubs include alder, dwarf birch, willow, and blueberry. Black fir supports burn regularly; these fires make it rare to find trees over 100 years old. River corridors and mountainous areas in the lowlands tend to be more productive; these forests include silver fir, paper birch, aspen, rose, and cranberry. The subalpine area, about 750-1,200 meters in elevation, consists of shrub vegetation dominated by dwarf birch, alder, and willow alternating with spruce forests. Other species found in this area include wormwood, lupine, winter greenery, and goldenrod. The alpine zone is generally above 1,000 meters and consists of the tundra, most often dominated by dwarf species of heath, rose and willow. Due to the extensive geomorphic activity and the relatively young age of most surfaces in the Alpine zone, many slopes are essentially arid, supporting only a few scattered cushion plants. The upper limit of plant growth is about 2,300 meters; altitudes above 2,500 meters are mostly covered with glacial ice.