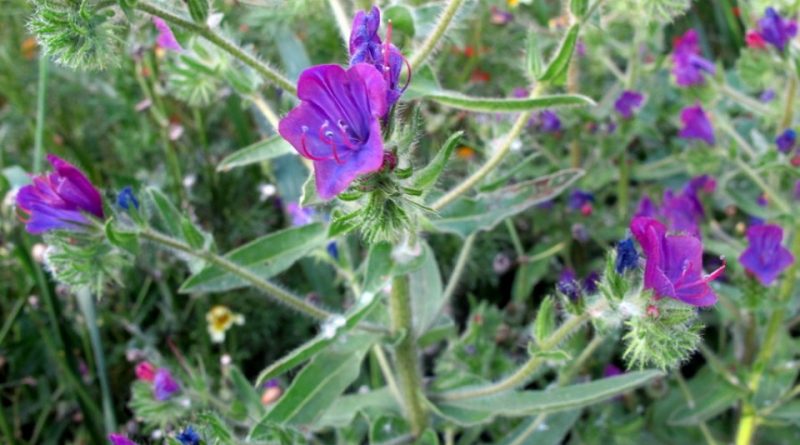 The Purple viper’s-bugloss or Paterson’s curse (Echium plantagineum L.) is an annual herbaceous species belonging to the Boraginaceae family.

Etymology –
The term Echium comes from the Greek ἔχις ékhis vipera: viper plant, due to the shape of the curved inflorescences like a snake’s head.
The specific epithet plantagineum comes from the Plantago genus: similar to a plantain, even if only for the leaves with almost parallel veins, probably referring to the very broad basal leaves close to the ground, like those of the greater plantain.

Geographic Distribution and Habitat –
The Purple viper’s-bugloss is a native plant of southern and western Europe, North Africa and southwestern Asia. In the 1880s, it was accidentally introduced to Australia where it became a very difficult weed to control.
In Italy it is present in all regions except in the Aosta Valley, Lombardy and Trentino-Alto Adige, but more frequent in the center-south.
Its preferential habitat is that of the arid and sandy uncultivated, in ruderal environments and along the roads, from sea level to the lower mountain belt (0 – 1300 m s.l.m.). 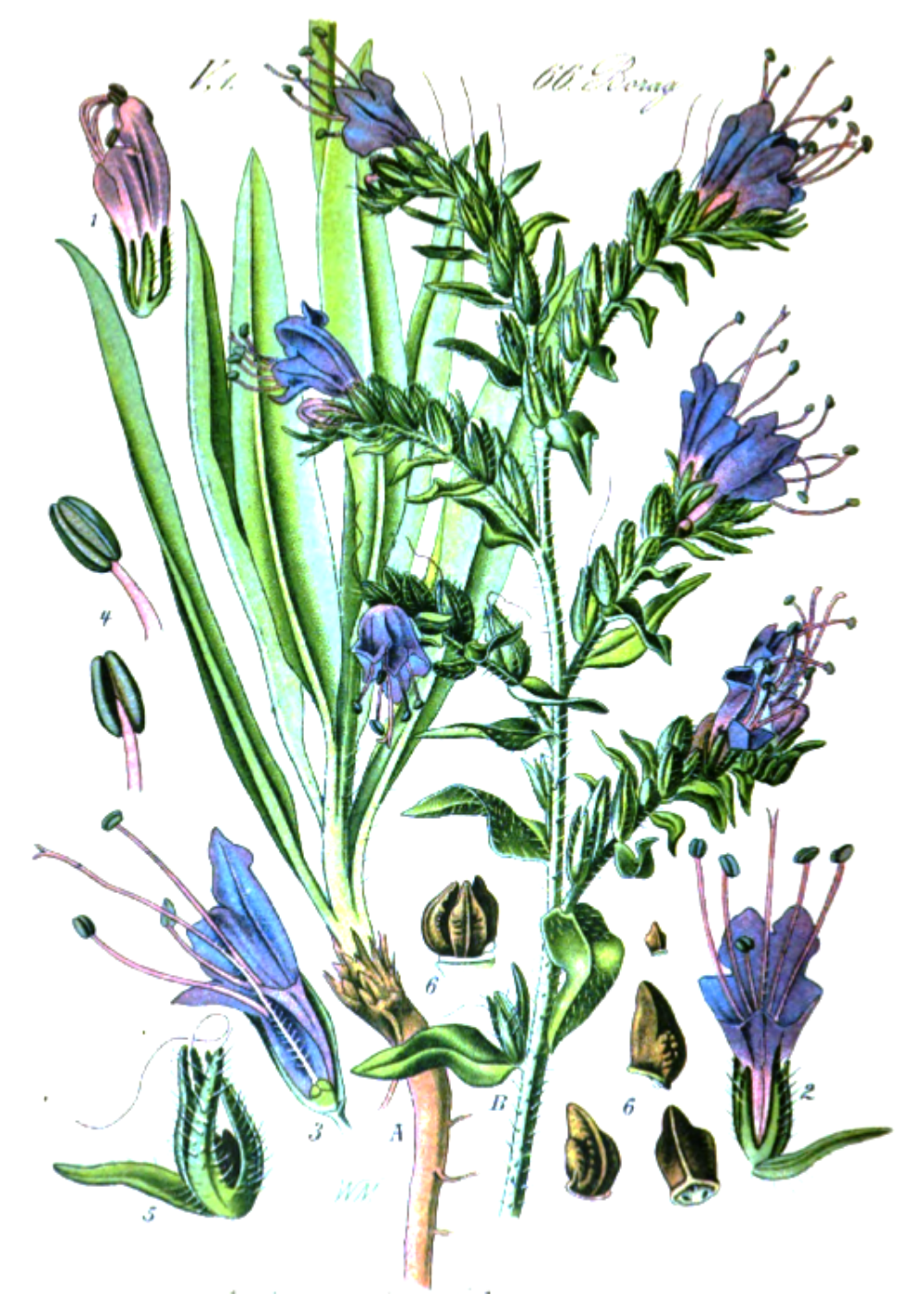 Description –
Echium plantagineum is an annual plant that reaches 20–60 cm polymorphic height.
The stems are erect, branched, with prostrate-ascending lateral jets, covered with short hairs and soft or bristly-tuberculate bristles, erect or close.
The basal leaves are in the form of a wintering rosette, ovate-lanceolate, 2-4 x 8-14 cm, petiolate, with often ± evident lateral veins and covered with soft close hairs; the cauline leaves are oblanceolate-linear, sessile, wider at the base, auricular, semi-embracing.
It has inflorescences in short scorpioid buds, elongated in maturity, arranged at the axil of the upper leaves, with hermaphroditic zygomorphic flowers.
The calyx is a gamosepalus with 5 identical, hairy, linear teeth, 8-10 mm when flowering, growing up to 15 mm when fruiting.
The corolla, which measures 15-30 mm, is zygomorphic, broadly funnel-shaped and oblique to the mouth, with 5 obtuse, unequal lobes, initially purple, then bright blue, rarely white, hairy on the outside only on the ribs and at the margins of the lobes.
It has 5 stamens welded to the corolline tube, generally with only 2 protruding stamens. The ovary is outdated.
The fruit is a schizocarp consisting of 4 tuberculous monosperm mericarps with a triangular outline, light gray-brown in color.
The antesis is between March and July.

Cultivation –
Purple viper’s-bugloss is a plant that grows best in an open, sunny location in moderately fertile, well-drained soils. Wealthy soils favor lush leaf growth at the expense of flowering.
Propagation occurs by seed with sowing that must be done in situ in late winter-May or August-late autumn. Germination usually occurs within 2 to 3 weeks at 15 ° C.
In case of seed deficiency, it can be sown in pot in a cold greenhouse. In this case, when the seedlings are large enough to handle, they should be placed in individual pots and transplanted in the summer.

Customs and Traditions –
In recent years there has been a surge of interest in a number of species of Echium, particularly Echium plantagineum, owing to the fatty acid composition of the seed oil.
Like borage oil, it contains significant amounts of gamma linolenic acid (GLA), but it also contains the rarer stearidonic acid (LotR), which is also an important intermediate in the production of a number of important compounds in the body.
Both acids are produced by the same enzyme and their effects are complementary, so the oil is potentially valuable as a health food and cosmetic component.
Echium seed oil contains a unique ratio of omega-3 and omega-6 fatty acids.
These lipids, previously obtained from other plant sources, have been used in food supplements for many years.
Among the various uses of the oil extracted from the seeds of this plant, we remind you that it is potentially valuable as a cosmetic component due to its moisturizing and anti-inflammatory action.
However, it should be remembered that due to the high concentration of pyrrolizidine alkaloids, present in the shoots, this plant is poisonous for grazing animals, in particular for those with a simple digestive tract such as horses. Toxins accumulate in the liver and excessive consumption can lead to death.

Preparation method –
An oil can be extracted from the seeds of the Purple viper’s-bugloss, which, due to its chemical composition, is suitable for cosmetic applications and as a food supplement for some deficiencies and pathologies of the human body.