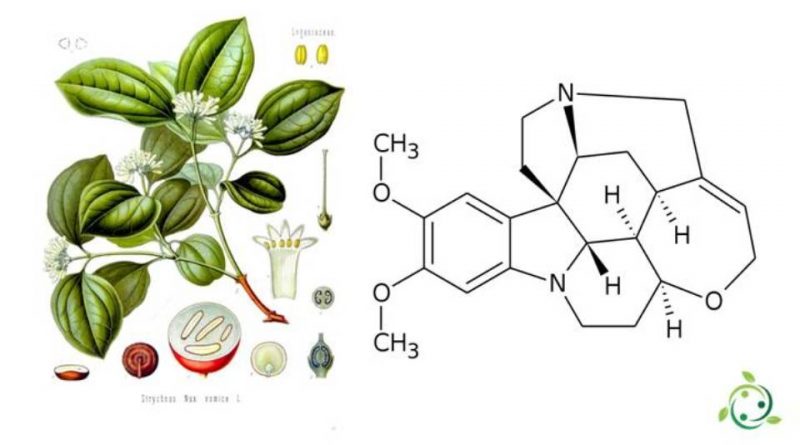 Brucine or 2,3-dimethoxystrychnine is an alkaloid very similar to strychnine, with a brute or molecular formula: C23H26N2O4.
Burning, from a physical point of view, at ambient temperature is presented as a solid white in odor. It is a substance containing a system of seven rings between them condensed, two of which make up the indole system. It comes in the form of white crystals, poorly soluble in water, but soluble in organic solvents such as ethyl ether, chloroform, ethanol, and methanol.
Brucine is synthesized in nature and is present in some plants such as: Strychnos ignatii P. J. Bergius or in Strychnos nux-vomica Linnaeus, 1753, from which it can be extracted.
Brucine is a very toxic compound, dangerous for the environment and was first identified in 1819 by Pelletier and Caventou in the bark of Strychnos nux-vomica. Although its structure was determined much later, its similarity to strychnine was guessed in 1884 when the chemist Hanssen converted these two substances into the same molecule.
Brucin is believed to be a more bitter-tasting alkaloid but physiologically much less active than strychnine while being a neurotoxin that acts as a glycine receptor antagonist.

Brucine has chiral carbon atoms and is typically used for resolution of racemic mixtures.
One of the methods used to separate the components of a racemic mixture involves a chemical process in which the raceme is reacted with an asymmetrical molecular species. In this way two diastereomers are obtained which generally have different properties and are therefore separable by physical means.
Brucine has basic properties having a dissociation constant Kb of 1.9 • 10-6.
Brucin is used as a denaturing agent of ethanol and is used, together with other alkaloids, as rat poison.
Its dangerousness by inhalation or ingestion causes intoxication and mechanical irritation. The substance may cause effects on the nervous system and eyes, resulting in convulsions and respiratory paralysis. Exposure may lead to death. The substance is also said to be cardiotoxic and does not release metabolites into the body.