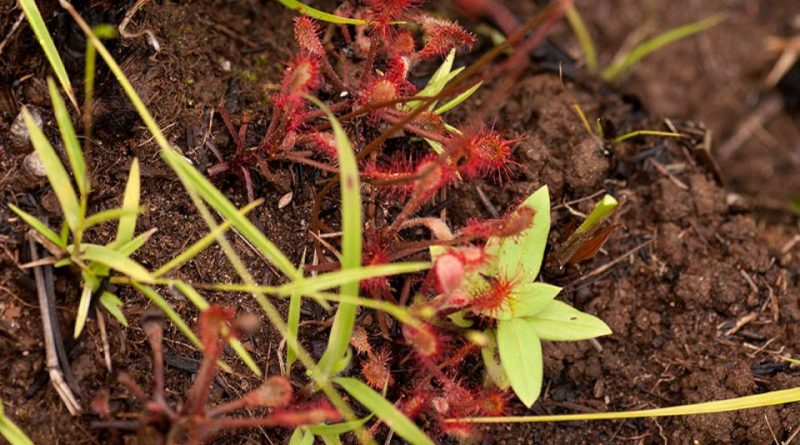 Etymology –
The term Drosera comes from the Greek δροσερός droserós dewy, which has droplets.
The specific ramentaceous epithet is of uncertain origin.

Geographic Distribution and Habitat –
The Drosera ramentacea, like other plants of the same genus, originated in Africa, and in particular in Madagascar, from where they then spread to other continents such as Australia, by speciation, up to the current range.
Today it is grown all over the world.
Its habitat is that of humid, swampy and peat bogs but it also adapts well to other conditions. 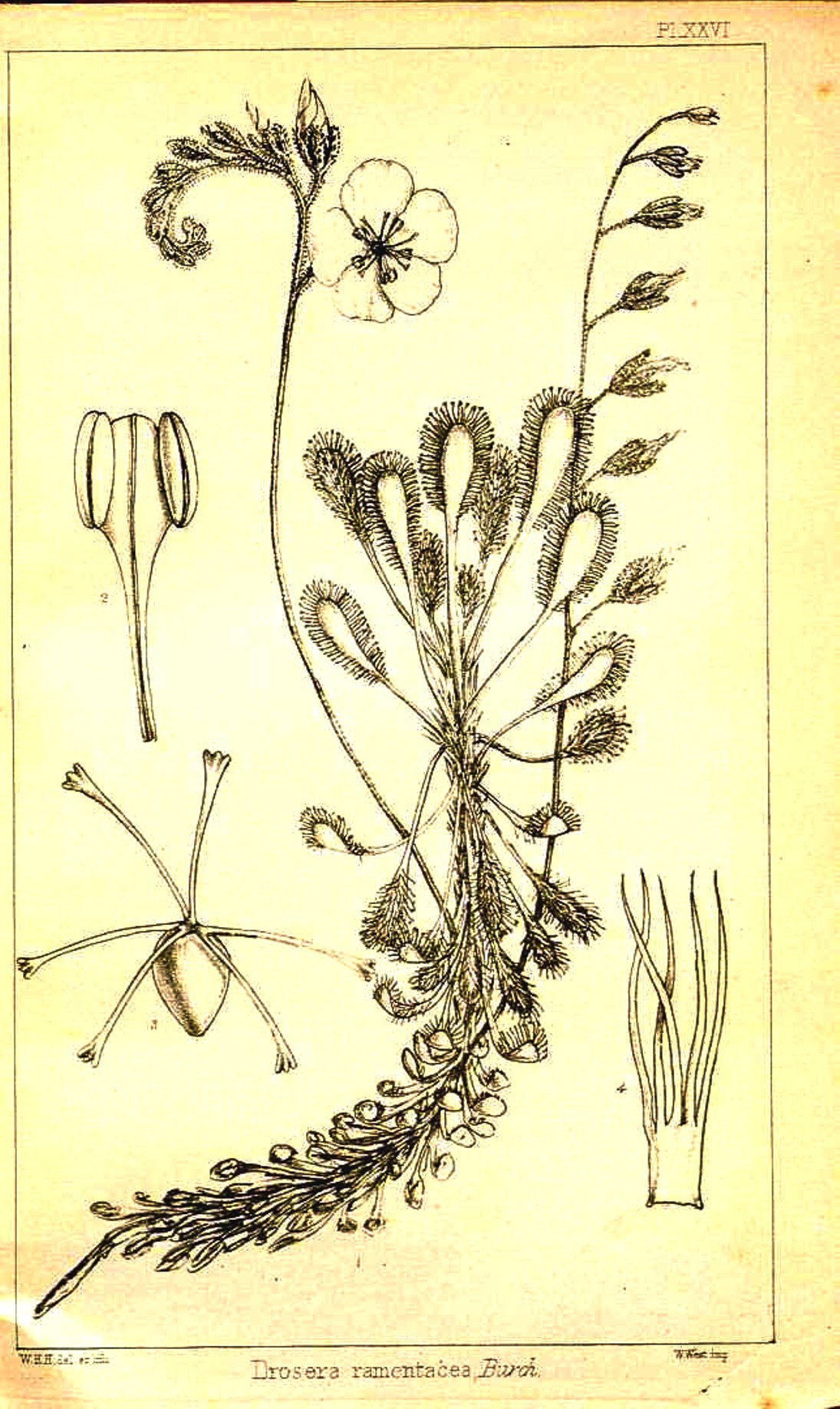 Description –
Drosera ramentacea is a small perennial insectivorous herbaceous plant.
The leaves are alternated along a stem, grouped and erect towards the apex, deflected further down, spatulate, covered with sticky pedunculated glands to trap insects, scarcely hairy below. The petiole is 1-3 cm long, hairy or hairless above, usually hairy below.
The stem is flowered and rises laterally, curving to become erect.
The inflorescence bears 2-14 flowers that are pink or purple and often do not open.
Flowering occurs in spring and summer and generally lasts about 3 days. The flowers will later wither, starting the seed development phase.
The fruit is a capsule.

Cultivation –
Drosera ramentacea is a fairly easy species to grow even if particular attention must be paid in winter in places with excess humidity and poor light. The plant generally prefers warm and bright days, cool nights.
Furthermore, its longevity is remarkable: in fact the plant can reach 50 years of age.

Customs and Traditions –
The historical use of sundew is similar to its use in modern herbal medicine. In 1685, Johann Schroder wrote in his book The Apothecary or a Treasure Chest of Valuable Medicines, that sundew was a beneficial herb that “cures lung ailments and coughs”. Sundew tea has been specifically recommended in Europe by herbalists for dry cough, bronchitis, whooping cough, asthma and “bronchial cramps”.
From Drosera ramentacea an extract can be obtained which is used to promote the fluidity of bronchial secretions. It has an emollient and soothing action on the oropharyngeal mucosa and improves the tone of the voice.
In general, this plant performs spasmolytic activity on the smooth mucosa of the bronchi and antibacterial, indicated in case of asthma, allergic asthma, bronchitis, allergic bronchitis, whooping cough, whooping and irritating cough and in smokers’ cough. Folk medicine recommends its use against warts.
The components contained are: naphthoquinone substances (plumbagina and droserone), flavonoids, droseroside, vitamin C and mineral salts.
These active ingredients are extremely effective in anti-cellulite cosmetic treatments. The adhesive polysaccharides (which the plant normally uses as a trap for insects) counteract the accumulation of fats and promote their dissolution, with a slimming and remodeling effect visible after regular applications on the affected parts.

Preparation Method –
Herbal preparations are mainly made with roots, flowers and capsules.
It is used in the form of mother tincture, fluid extract and syrup.