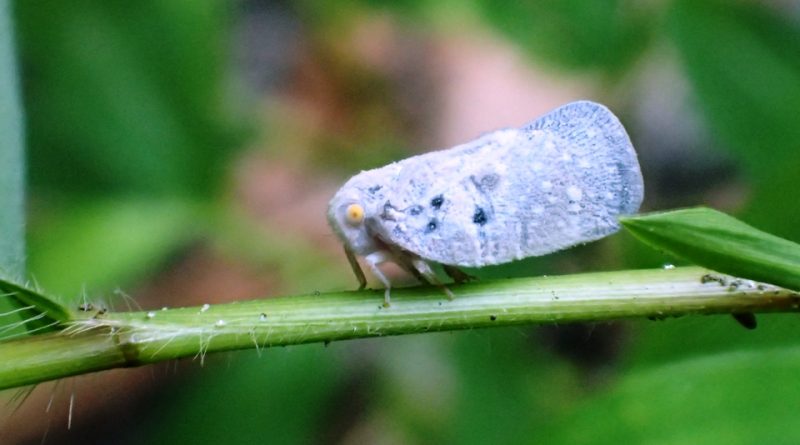 Geographic Distribution and Habitat –
Metcalfa pruinosa is an insect of American origin, where it is widespread both in the north (Canada, Ontario, Québec, USA, Mexico, Caribbean islands) and in the south up to Brazil. This insect was introduced accidentally in Europe and was found for the first time in Italy in 1980 in Veneto, from where it then colonized the whole national territory, including the islands and also spread to the surrounding areas (France, Switzerland, Croatia, Slovenia) .
It is a phytomizo insect, which feeds on vegetable sap to the detriment of some plants such as: Vine, Fig, Fruit-bearing, ornamental, ornamental of landscape interest (Maple, Hornbeam, Linden and others).

Morphology –
The Citrus flatid planthopper is an insect whose adult has dimensions of about 4-8 mm, of a light gray color and then darker, with the wings placed on the roof, very sloping on the body. They are equipped with trapezoidal front wings that are held vertically and wrap the body when the insect is at rest. The head is provided with highly developed compound eyes and a pungent sucking mouthparts, typical of many snubs.
The juvenile forms, white, are protected by abundant waxy productions with a cottony appearance and always white in color; these secretions are produced by the nymphs through two evident siphons that perform a glandular function, placed in the terminal part of the abdomen.
The egg is white, elongated, sub-cylindrical in shape, about 1 mm long with two longitudinal furrows.

Attitude and Life Cycle –
Metcalfa pruinosa has a uni-turn cycle, therefore with only one annual generation and overwinters at the egg stage.
The eggs are laid in the crevices of the bark of the numerous host plants where they are partially embedded in the bark by the robust morphological ovipositor of the female. The first nymphs will occur around mid-May and will last until mid-July as the hatching of the eggs is scalar.
This insect develops through five stages: three of nymph and two of nymph. Towards the second decade of July the first adults are observed.
Mating then takes place in the period of September – October, at night. After mating, the female lays 50 – 100 eggs which will hatch in spring and so the cycle is repeated every year.
The nymphs and adults of this insect are mobile and able to jump, joining the jump to the flight, while the nymphs are not mobile and tend to stay on the underside of the leaves.
With trophic stings, but especially with secretions and the abundant honeydew produced, these insects, in the case of high infestation, can smear the affected green organs and weaken them.

Ecological Role –
The Metcalfa pruinosa, as mentioned, is a phytomizo insect, which feeds on vegetable sap, of which it digests only the protein part, while the sugary part, indigestible, is expelled in the form of honeydew which is deposited on the vegetable organs.
Due to the high sugar content, the honeydew attracts several hymenoptera, including bees who, in the summer, turn it into honey. A particular relationship is therefore established between these insects and bees, resulting in fundamental importance for them and for beekeepers. The honey of this particular type of honeydew is the only one that is not named after a plant species.
However, in conditions of high infestation, the species can still be harmful to agriculture, as it can cause damage to crops, in particular it attracts fungal species, causing fumigations that develop on the sugary substances of the honeydew.
Metcalfa lives at the expense of over 200 species of plants, both arboreal and herbaceous and among the host plants to which they can cause economic damage we remember: vines, citrus fruits, pome fruit and stone fruit as well as many plants used for the constitution of hedges to ornamental purpose, which can constitute important outbreaks for the spread of the infestation.
The damage, as is evident, is caused by the removal of the sap and, mainly, by the production of whitish honeydew and wax that smear leaves, shoots, shoots and clusters. Abundant fumaggini can develop on these secretions which compromise the photosynthetic capacity of the plant. If the infestations are very strong, the correct development of the shoots can be compromised, while the honeydew can attract wasps that damage the ripe clusters. The presence of the soiling, which tends to take on a blackish color following the development of saprophytic fungi, allows easy recognition of the affected plants.
The containment of high infestations is linked to cultivation techniques that are not exasperated from the point of view of crop specialization, excessively intense sixths, the use of nitric fertilizers and a whole series of measures that can create conditions of greater biodiversity of farm crops .
Among other things, the relative recent introduction of this insect on the European continent is not followed by the presence of its natural antagonists, which complicates the biological fight.
The natural limiters of Metcafa pruinosa on the European continent are reduced, consisting mostly of larvae of chrysopid neuropterans and larvae and adults of coccinelidae. It is possible to use the antagonist hymenoptera driinide Neodryinus typhlocybae, widespread in the area of ​​origin of the metcalfa which seems to constitute a valid containment factor. An antagonist is the great tit that feeds on the insect in one of the early stages (when it is white and jumping).
Insecticides should not be used, except at the limit of pyrethrum-based phytosanitary products also because this insect is generally controlled with the other treatments performed, as in the case of the phytophages of the Vine.
Incorrect use of phosphorganics, recommended in other texts, as the co-presence of useful entomofauna and pollinators is drastically decreased with serious consequences both in the year of intervention and in the biological cycle of the following years.