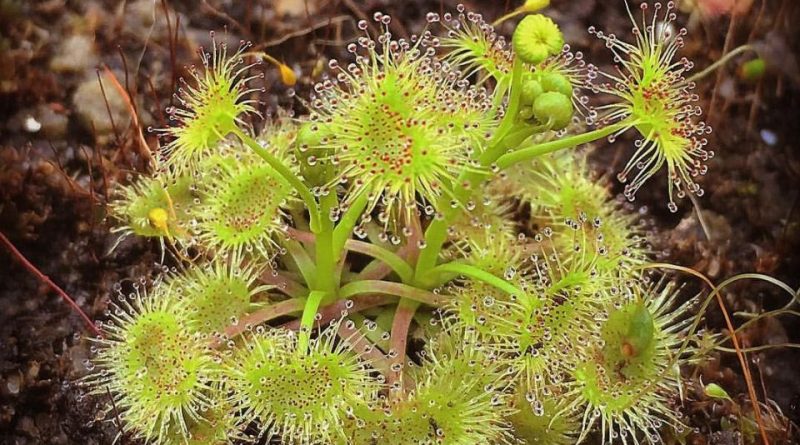 Geographic Distribution and Habitat –
The Shield sundew is the sundew with the greatest diffusion, with a rather wide range that includes southern, eastern and south-western Australia, Tasmania, the Northland of New Zealand, South-east Asia and India.
Its habitat is those of areas where the summer is characterized by severe drought and goes into aestivation in the form of an underground tuber. It also grows in nutrient-poor environments on sandy soils and in peat bogs, completely dry in summer and saturated with water in winter. 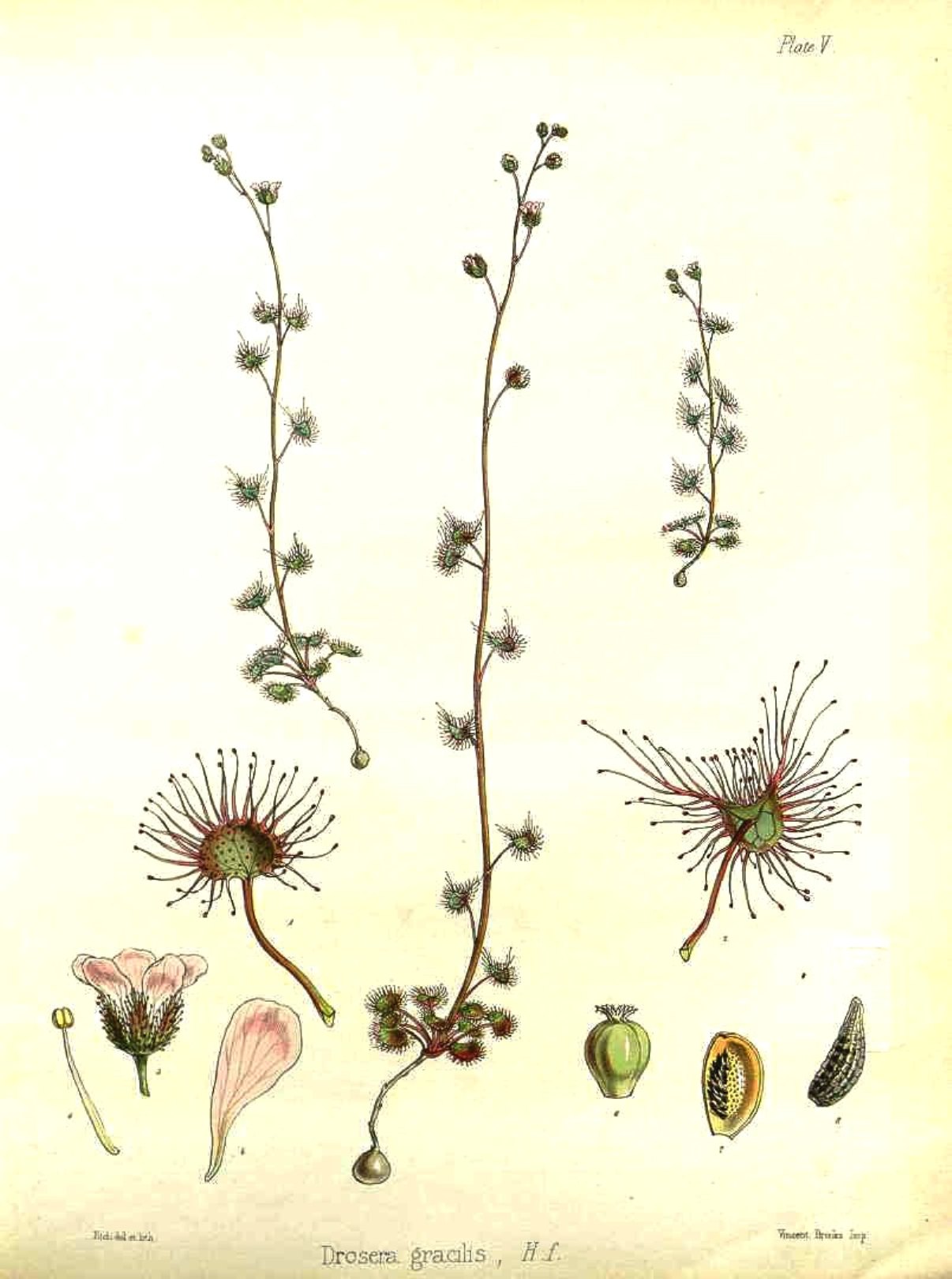 Description –
Drosera peltata, unlike other Drosera, has an erect posture that reaches an average of 20 – 50 cm in height.
To cope with the drought of the summer months, the plant enters a sort of rest, blackening and losing the aerial part, closing itself in underground tubers.
During the first autumn rains, the tubers will give life to new plants that in spring will bloom profusely with very delicate scented and pink flowers.
It has leaves on the surface of which there are glands that secrete a gluey substance rich in enzymes to capture and digest small insects.
The underground tuber is generally found 4 – 6 cm below the surface of the soil, and its aerial parts possess wide differentiation in different forms.
The aerial stem is simple or slightly branched. The color of the plants is also very variable.

Cultivation –
Shield sundew is, within its genus, one of the easiest to grow, a feature that is attributed to its ability to adapt to water and temperature requirements.
Typically requires wet and cold winters, which is their active growing season, and warmer, almost dry summers; it can also withstand more humid summers.

Customs and Traditions –
Drosera peltata was first described by Carl Peter Thunberg in 1797. Due to its wide range and varied bearing, D. peltata has accumulated a number of infraspecific synonyms and taxa, including varieties and subspecies. Most of the subspecies have been reduced to synonyms, but the two taxa still considered valid are D. peltata subsp. peltata and D. peltata subsp. auriculata, originally named by James Backhousee formally described by Jules Émile Planchon in 1848 as D. auriculata and later reduced to subspecies of D. peltata by Barry John Conn in 1981. The auriculata subspecies is still considered a valid and separate species by some authors.
The sundew contains active ingredients with antispasmodic properties on the smooth muscles of the bronchi, disinfectants and anti-inflammatory.
To this plant, as to other species of this genus, are attributed anti-inflammatory, antiseptic, broncho-spasmolytic and secretolytic properties. These activities are attributable to the naphthoquinones contained within the same plant. In particular, the antimicrobial activity seems to be mainly exercised by naphthoquinone plumbagina.
Furthermore, from in vitro studies it emerged that plumbagin is also able to exert an anti-inflammatory activity through a mechanism of action that provides for the inhibition of the synthesis of pro-inflammatory prostaglandins.
In folk medicine, sundew is used as a remedy against warts, as well as being used in preparations used for the treatment of asthma, spasmodic coughs and tuberculosis.
The sundew is also used in the homeopathic field, where it can be found in the form of granules, mother tincture and oral drops.
Homeopathic medicine uses this plant in case of respiratory diseases (such as spasmodic cough, bronchitis, tracheitis, laryngitis and whooping cough), rheumatism, arthritis, osteoarticular pain, anxiety disorders, depression, dysentery and lymphatic system affections.
The amount of homeopathic remedy to be taken can vary from individual to individual, also according to the type of disorder that needs to be treated and according to the type of preparation and homeopathic dilution to be used.
It should be noted that the applications of sundew for the treatment of the aforementioned disorders are neither approved nor supported by the appropriate experimental tests, or have not passed them. For this reason, they may have no therapeutic efficacy or even be harmful to health.
Among the contraindications, it is necessary to avoid taking it in case of gastritis, peptic ulcer, enterocolitis or hypersensitivity to one or more components.

Preparation Method –
The used parts of the sundew are all the aerial parts that are harvested in the summer. The sundew is used fresh or dried in a ventilated, warm and dark place. With the sundew you can make an infusion used for cough and inflammation of the respiratory system in general, also demonstrating a slight antibiotic property.
To prepare the sundew infusion, add 250 ml of boiling water with a teaspoon of the plant, leaving it to rest for 10 minutes. It is filtered and consumed up to 4 cups a day. There are several cough remedies on the market that contain sundew extracts or tinctures, also associated with other plant extracts that have a mucolytic action.
Sundew is not used in cooking due to its sour and bitter taste.