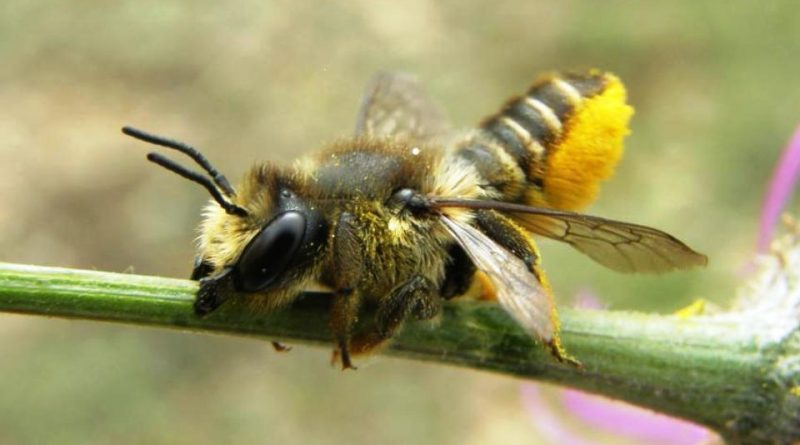 The Patchwork leafcutter bee (Megachile centuncularis Linnaeus, 1758) is a hymenopteran insect belonging to the Megachilidae family.

Geographic Distribution and Habitat –
The Patchwork leafcutter bee is a phytophagous insect that lives on various plants including, often, bramble, thistle and roses.
Its habitat is that of gardens, both rural and urban, which provide suitable food for this species.

Morphology –
The adults of Megachile centuncularis are recognized for their medium size (10-13 mm), blackish in color, with the body covered with a greyish hair with reddish hues that are abundant on the head, on the thorax and in the uro-sternal area.

Attitude and Life Cycle –
Megachile centuncularis usually develops an annual generation and overwinters as a mature larva inside the built cells; in spring, as temperatures rise, the larva turns into a pupa.
The larvae, which are fed with honey, are placed in nests built in the hollows of the ground or in other crevices.
In order to escape, the adults open a passage with their strong jaws. Males flicker 18-20 days after pupation and females a few days later. The latter are equipped with a pollen collection structure, formed by fringes of hair (broom), placed under the abdomen; they mate only once and build 2-3 cells per day where they lay a single egg.
This hymenoptera is a fairly common species which, if in the presence of large populations, can economically interest, where present, the cultivation of roses as the female “cuts”, with her jaws, in a characteristic, regular and clear way the leaf margins , removing typical semicircular portions of the flap that it uses to build the walls of the cells of its nests.
Nests are generally built inside large wood burrows, cavities in old walls, and occasionally even in the ground. Megachile centuncularis uses 6-14 pieces of circular leaves per cell body with 6-7 discs forming the lid of each cell. For this purpose, ash, birch, honeysuckle, horse chestnut, lilac and rose leaves are used.
As a result, the leaves remain aesthetically disfigured by these semicircular cuts at the edges. The larvae, which are fed with honey, are placed in nests built in the cavities of the ground or in other crevices. The insect and the damage can be observed in the height of summer, between June and August. Finally, it should be remembered that the species considered can damage other plants besides the Rose, and that there are other species of Megachile with similar behavior.

Ecological Role –
The damage caused by Megachile centuncularis is generally of little importance, therefore, also considering the ecological role of the insect, as adults exercise pollinating activities, direct control means are generally not activated to combat it.
Furthermore, this insect, if synthetic products are not used, is also controlled by a small parasitic wasp which is Coelioxys inermis (Kirby 1802) and which inhabits the paleartic regions.