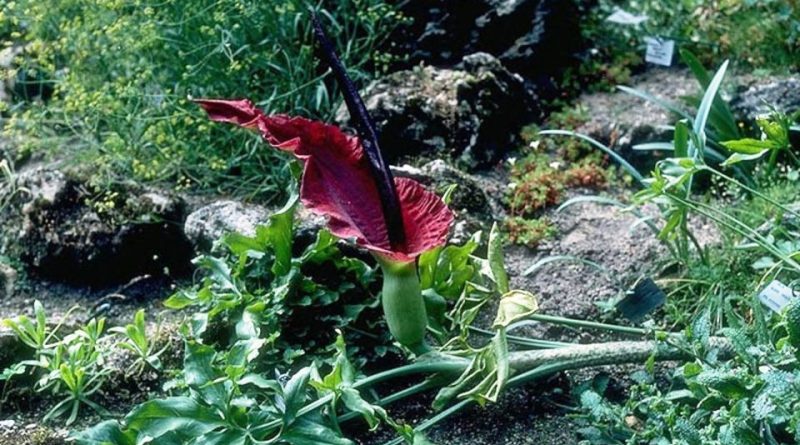 The Dragon arum or voodoo lily (Dracunculus vulgaris Schott) is a perennial herbaceous species belonging to the Araceae family.

Etymology –
The term Dracunculus is the diminutive of dráco drago: small dragon, tarragon.
The specific epithet vulgaris comes from vúlgus vulgo: very common, ordinary due to its widespread use, banal.

Geographic Distribution and Habitat –
The Dragon arum is a species with a typically Mediterranean distribution range, limited to the Mediterranean coasts and corresponding to the olive tree area.
This widely distributed species is native to the Balkans, southwestern Turkey and various islands of the Aegean Sea, including Crete; it was then introduced in France, Italy, the British Isles, north-eastern Algeria, New Zealand and the United States of America, where it is an adapted species.
In Italy it is present in almost all regions, in some cases as an adventitia, but it is more common in the Mediterranean ones.
Its habitat of diffusion is that of mixed and sclerophyll forests and in environments of Mediterranean scrub, garrigue, olive groves, uncultivated grass and dry soils, where it is found up to an altitude of 600 m s.l.m., below the mountain belt. This plant also colonizes densely populated areas, thus having an opportunistic character. 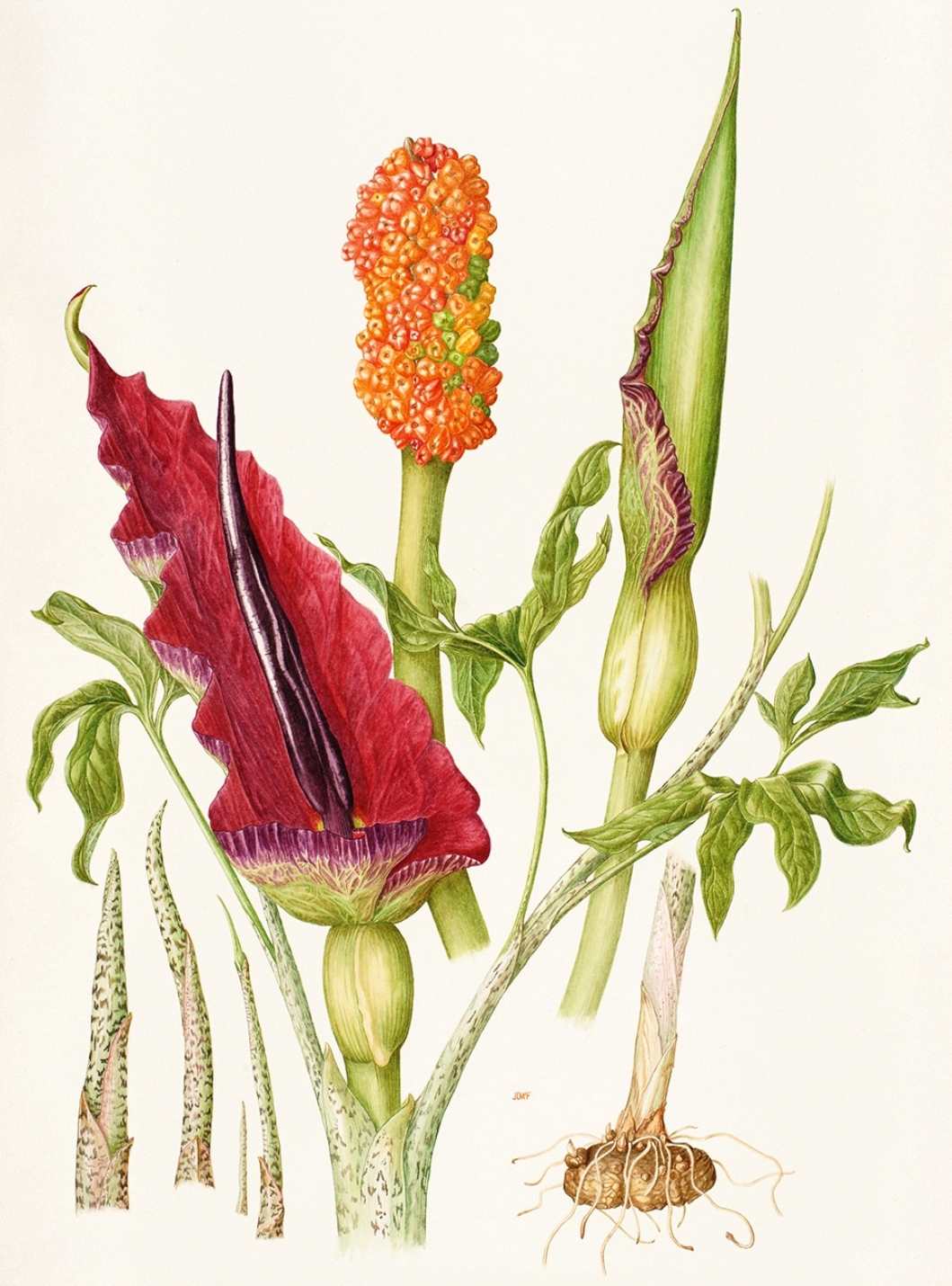 Description –
Dracunculus vulgaris is a geophytic plant, with tuberiform roots, which can grow up to 1.5 meters.
The plant develops from an underground bulb, splitting the ground with its leopard-print tips.
The voluminous and large inflorescence forms between April and May; this is composed of a spathe, purplish inside, and green on the outside, which can reach a width of 50 cm, containing the real flowers, both male and female.
The smell of the open flower is similar to rotting meat, which is useful for attracting many insects; once the insect has penetrated the base of the spathe, it is blocked by two crowns of petals facing downwards and fills with pollen during attempts to get out.
At the end of flowering the fruits are formed, which are small obovoid berries, red-orange when ripe, of 3-5 x 4-7 mm, in number of 60-80 in the infructescence of 4-12 x 3-5 cm .
The seeds are ovoid or globose, compressed, pale brown in color, with a diameter of 3-4 mm.

Cultivation –
The Dragon arum can be grown for ornamental purposes. The plant should be done starting from the tubers that are planted at a depth of 15 cm in autumn or spring in humus-rich and well-drained soil that dries up in summer. It grows best in full sun but tolerates partial shade. It is also advisable to protect it with a dry winter mulch. It grows well in open clearings in sheltered woods or at the base of a sunny wall.
However, it is good to consider the unpleasant smell of the flowers during the location.
This plant, although it has been included among the vulnerable species in some regions (such as in Tuscany), globally does not raise particular concerns regarding its conservation; the only immediate danger is the collection of wild specimens for commercial purposes, but the market for this plant is still rather small.

Customs and Traditions –
Dracunculus vulgaris, known by various names, depending on where it grows, is a plant that, especially in the fresh parts, is toxic to humans and to animals that do not come close to it.
The Greek physician, Dioscorides, summarized in his writings the human knowledge of the use of medicinal plants; he noted, for example, that dracunculus, a plant with a stalk “mottled like the belly of a snake,” controls cancer, is abortive, cures gangrene, and is good for eyesight.
It has been used, especially in the past, in some traditional medicines.
In Turkish folk medicine, the fruits of this plant were used for the treatment of rheumatism, and the seeds for that of hemorrhoids.

Preparation Method –
Both the rhizomes and the fruits and seeds of this plant can be used for some therapeutic applications. However, there are few studies on this subject and therefore use without careful medical guidance is not recommended.