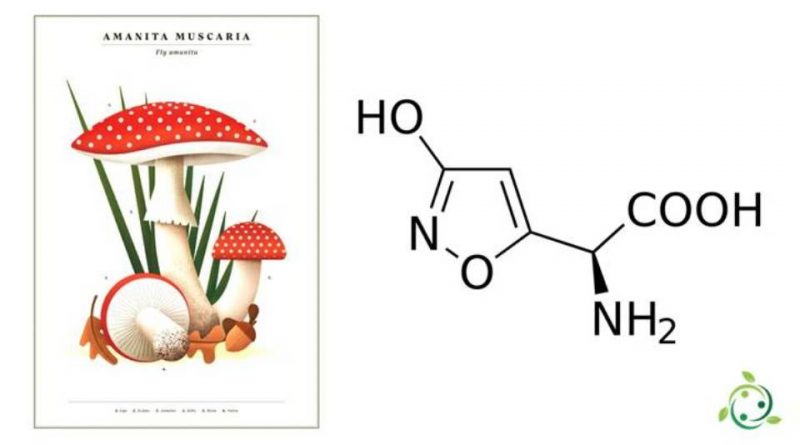 Ibotenic acid, whose term in the official IUPAC nomenclature is: α-amino-2,3-dihydro-3-oxo-5-isoxazolacetic acid is a toxic substance present in Amanita muscaria and Amanita pantherina.
Ibotenic acid has a brute or molecular formula: C5H6N2O4.
Both ibotenic acid and muscimol (its metabolite) are highly active toxins acting on the Central Nervous System.
Muscazone, another alkaloid present in minimal part of Amanita muscaria, does not appear to have toxic effects.
Furthermore, the most evident symptoms of ibotenic acid intoxication manifest themselves with outbursts of anger and hilarity, and hallucinations which are followed by a state of numbness and exhaustion.
Both ibotenic acid and muscimol are resistant to cooking and are water-soluble, so removing the boiling water will reduce its concentration. These toxins also resist remarkably on the dried carpophores of Amanita muscaria and Amanita pantherina, in which it is possible to find them even after 5-7 years of storage at room temperature
It has been observed that ibotenic acid, structurally related to glutamic acid, generates excitement, unlike muscimol being more similar to GABA (gamma aminobutyric acid), exerts a depressive effect. Furthermore, the hallucinogenic effect of muscimol is about 5 times higher than that of ibotenic acid.

From a biochemical point of view, ibotenic acid is a glutamate receptor agonist.
In laboratory rats, the intraperitoneal administration of an aqueous extract of Amanita muscaria (containing ibotenic acid) induces alterations in some hemato-chemical parameters.
In particular, a reduced activity of acetylcholinesterase, a reduction in hepatic levels of glycogen with a consequent increase in blood sugar and a reduction in azotemia were observed. On the other hand, the activity of serum transaminases is not changed and vital organs such as liver and kidneys are not compromised. Within six hours, the values ​​modified by the ingestion of the mushroom tend to normalize.
According to Italian legislation, ibotenic acid, muscimol and muscazone are not included in the tables containing narcotic or psychotropic substances subject to the supervision and control referred to in Article 14 of the Decree of the President of the Republic 309/90 and subsequent amendments.
In many European countries, such as Sweden, Norway, Holland, Finland, Denmark, England, mushrooms containing these substances can be legally bought, sold and owned. In Canada, mushrooms are not subject to control. In the United States, particularly in the state of Louisiana, the use is not legal if it refers to humans, while the law allows possession for strictly aesthetic, landscaping and decorative purposes.