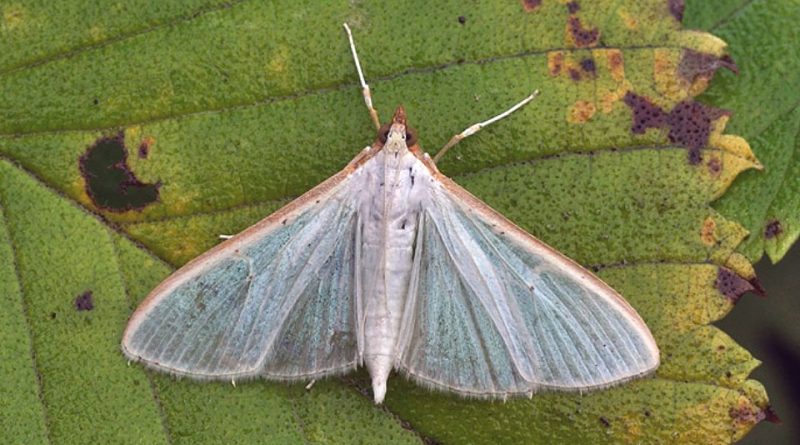 Geographic Distribution and Habitat –
Jasmine moth is a species native to the Mediterranean, where it is widely distributed also in the tropical and subtropical regions of the old world, as well as in America and Australia. This moth lives mainly on plants of the genus Olea, Fraxinus, Jasminum, Lygustrum and Arbutus.

Morphology –
At the adult stage this small butterfly can be recognized by its bright mother-of-pearl white color with anterior margin of the wings of light hazelnut color; it has a wingspan of about 25 – 30 mm; it has sexual dimorphism and the male is distinguished by a tuft of elongated scales in the terminal part of the abdomen.
Larva has a light yellow body upon hatching which then becomes more pronounced green. It has 3 pairs of small bristles arranged laterally on each segment. At its full development, the caterpillar measures 18 to 20 mm in length.
The chrysalis is dark in color, finely wrinkled and measures 12 to 16 mm in length, 3 to 4 mm in width.
The egg varies in color from pale white to yellowish and is elliptical in shape, flattened, and 1 x 0.5 mm in size.
The trophic activity of this moth is caused by the larvae that cause the destruction of a part of the foliage which in the event of strong attacks can cause the plant to stop developing.
In addition, the extent of the damage caused is closely related to the age and development of the plants and to the form of cultivation such as monocauli, bushy pots and bushes.
It has been seen that in the case of new monocaule plants or in the reconstitution of pre-existing plants in a bushy pot, the attacks of Palpita unionalis hinder the normal growth of twigs and shoots thus affecting both the overall development of the plant and the achievement and maintenance of the shape of breeding choice. The late attacks, which occur from 10 – 15 September onwards, are particularly harmful, as they occur on the growths of late summer – early autumn causing the delay of the vegetative restart in the following spring. Furthermore, in the case of particularly serious infestations, the drupes of the olives can also be attacked.

Attitude and Life Cycle –
The Jasmine moth, in some climatic conditions can make 4-5 generations per year that overlap each other; it winters in all juvenile stages (with the exception of the first age larvae) and as a pupa.
In central Italy it carries out up to 5 generations per year with wintering in various stages of development, especially as second and third age larvae.
The first adults make their appearance in early spring. They are active at night and mate from the second day.
Mating lasts from 4 to 6 hours and can be repeated numerous times. The laying period lasts from 11 to 30 days, depending on the periods. The female dies very soon and before doing so lays about 600 eggs, usually isolated, on the lower or upper layer of the leaves; these hatch within 3 or 20 days, depending on the temperatures; the lowest threshold is 9 ° C. The development of the larvae lasts from 18 to 25 days and these feed on the younger leaves, located at the ends of the branches, initially scraping a part and then cutting the part of the flap. The caterpillar, before becoming crystallized, builds a hiding place by tying leaves together with a silk thread.

Ecological Role –
Usually the attacks of Palpita unionalis do not justify chemical interventions since, in adult olive groves, it does not cause damage of economic interest. It is also kept in check by the treatments carried out against the olive fly and by some cultural treatments such as suckling; the latter, in addition to determining the lack of food for the young larvae, causes the destruction of the eggs, eliminating the foci of infection.
On the olive tree, the larvae feed on the leaves, shoots and drupes but the damage concerns only nursery plants and young plants.
On olive trees it is able to carry out two generations per year with wintering at the larva stage.
Larval activity is of the subcortical type and can result in the drying out of branches, branches and sometimes entire trees. Attacks generally occur at the base of the trunk or at the bifurcation of branches and manifest themselves with swellings and cracks: 5-6 larvae are enough to lead a young plant to death.
Control by means of insecticidal interventions is difficult, as well as not recommended, due to interference with the rest of the entomofauna and species of birds and mammals, and in any case presupposes the identification of the periods of oviposition.
Among other things, this moth is kept at bay by numerous enemies: among the most active parasites is the braconid hymenoptera, Apanteles xanthostigmus Hal., Which is capable, alone, of parasitizing up to 40 – 50% of the larvae. and the tachinid dipteran, Nemorilla maculosa Meig .. These insects are endophagous and develop on the larvae. Among the predators, in addition to numerous species of spiders, the larvae of the hoverfly Syrphus corollae F. which feed on the juvenile forms were also active.
In the techniques of biological or integrated control good results are being obtained in Spain with the method of sexual confusion, moreover the Bacillus thuringiensis Berliner has been used effectively in experimental tests by treating the appearance of the first damage in the presence of larvae in the early stages of development and repeating the operation after 6 – 8 days. Late treatment does not give satisfactory results due to the simultaneous presence of more vulnerable (I and II stage) or less (III and IV stage) larvae.