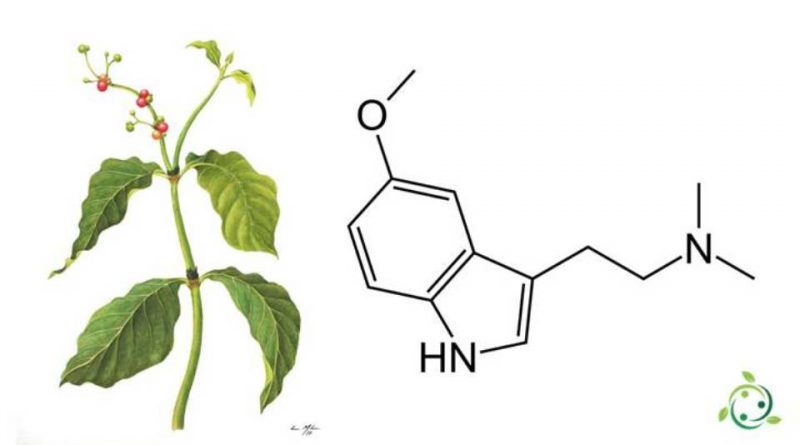 5-MeO-DMT, whose term in the official IUPAC nomenclature is: 5-methoxy-N, N-dimethyltryptamine is a psychedelic tryptamine found in many plants and in the venom of the Incilius alvarius toad.
Among the plants we remember Mimosa tenuiflora, Diplopterys cabrerana and Psychotria viridis.
This alkaloid has a brute or molecular formula: C13H18N2O and is found in the form of white (if high purity) or yellow / brown crystals.
Plants containing this substance are commonly used in South American shamanic practices.
It is also one of the main active constituents of the ayahuasca drink.
Dried Psychotria vidris contains about 0.10–0.66% alkaloids. About 99% of this is DMT. Other alkaloids have been found such as beta-carbolines (armala alkaloids) and N-methyltryptamine (NMT).
5-MeO-DMT can be insufflated, taken orally or smoked; according to use, the doses change accordingly. The average amount of psychedelic varies between 10 and 30 mg.

The effects of this substance on the human body vary from subject to subject but some of these occur in a common way: in fact, the intake of 5-MeO DMT causes very weak hallucinogenic visual experiences (as opposed to simple DMT), euphoria, auditory hallucinations and sensitive in general, change in the perception of time, nausea, dysphoria, short-term memory loss, difficulty concentrating, muscle spasms, dissociation from reality, fear, terror, panic attacks, insomnia and an apparent death that lasts up to 5 minutes.
The effects of 5-MeO-DMT have a relatively short duration, ie between 20 and 45 minutes, and are very similar to those derived from the use of Dimethyltryptamine.
5-MeO-DMT, in the United States is listed as a psychoactive drug in Table I (along with cocaine, heroin and other “hard” drugs) since January 19, 2011.
In many other countries, the possession of this substance is illegal as is its sale and consumption.
5-MeO-DMT, in Italy, is not explicitly contemplated in table 1 of narcotic substances, updated to July 2018, but it is considered illegal as it is the ether of DMT.