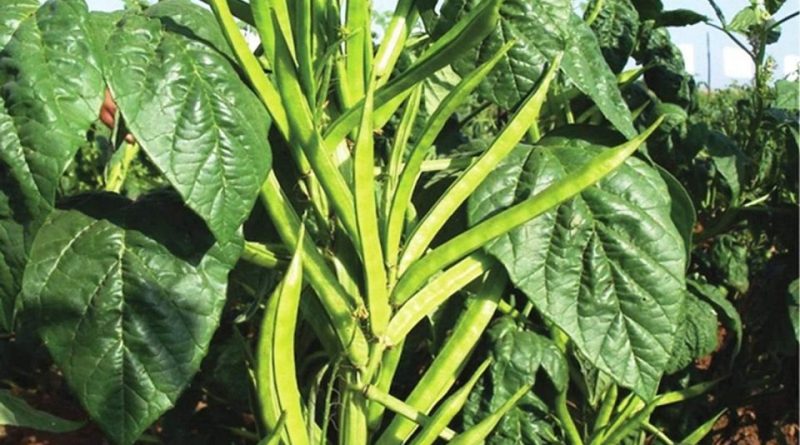 Geographic Distribution and Habitat –
The origin of Cyamopsis tetragonoloba is unknown, as it has never been found in nature. According to some authors it would come from India even if it is assumed that it developed from the African species Cyamopsis senegalensis. It was then further domesticated in South Asia, where it has been cultivated for centuries.
This plant grows well in semi-arid areas, but with frequent rains necessary. 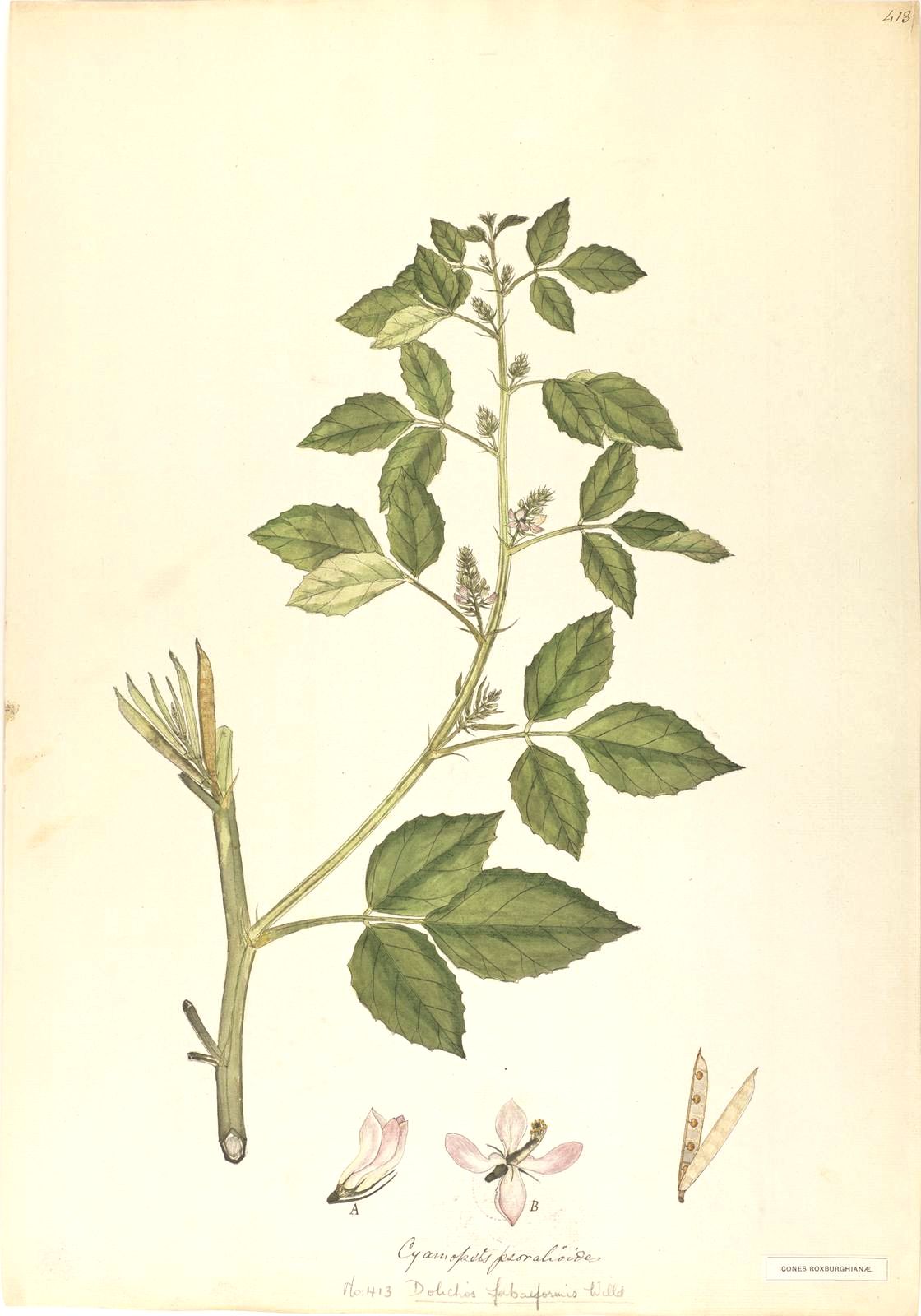 Description –
Cyamopsis tetragonoloba is a plant that grows in a vertical position, reaching a maximum height of 2–3 m.
It develops from a single stem with basal branching or fine branching along the stem. It features taproots that can access soil moisture at shallow soil depths.
This legume develops root nodules with the presence of rhizobia that fix the azoton in the superficial part of its root system.
The leaves and stems are mostly hairy, depending on the cultivar.
The leaves have an elongated oval shape (from 5 to 10 cm in length) and with alternate position.
The flowers form in clusters at the armpit of the plant and are white to bluish in color. The developing pods are rather flat and thin and contain 5 to 12 small oval seeds 5 mm long.
Mature seeds are usually white or gray, but with excess moisture they can turn black and lose their germination capacity.

Cultivation –
Guar is a drought-tolerant, sun-loving legume but is susceptible to frost. Although it can withstand sparse but regular rainfall, it needs sufficient soil moisture before sowing and during seed ripening.
Frequent dry spells can lead to delayed ripening. Conversely, excessive moisture during the first growth phase and after ripening leads to lower seed quality.
This plant can grow on a wide range of soil types. However, it prefers fertile, sandy or medium-textured soils or clayey soils only if well drained, since stagnation decreases the performance of the plant.
It grows best in moderate alkaline conditions (pH 7-8) and is tolerant to salinity. Its taproots are inoculated with rhizobia nodules, so it produces a lot of nitrogen-rich biomass and improves soil quality.
Once collected, the guar seeds are dried, peeled to separate the egg white from the external integuments, then ground. The result of this manufacturing process is an ivory-white water-soluble powder.
It is generally grown mainly in northwestern India and Pakistan with smaller yields in the semi-arid areas of the Texas highlands in the United States, Australia, and Africa. The most important cultivation area is located in Jodhpur in Rajasthan, India, where the demand for guar for fractionation has produced an agricultural boom like in 2012.
Currently, India is the main producer of cluster beans, accounting for 80% of the production of the world total, while Rajasthan, Gujarat, the Kutch region occupies the largest area (82.1%) cultivated with guar of the country. In addition to its cultivation in India, the crop is also grown as an income crop in other parts of the world. In the United States, several farmers have converted their crops to guar production to support the growing demand.

Customs and Traditions –
Guar or cluster bean is an annual legume and the source of guar gum. It is also known as the gavar, gawar or guvar bean.
The seeds of guar beans have a notable feature. Their core consists of a protein-rich germ (43-46%) and a relatively large endosperm (34-40%), containing large amounts of galactomannan. This is a polysaccharide containing polymers of mannose and galactose in a ratio of 2: 1 with many branches. Structure that gives it a great hydrogen bonding activity with a viscous effect in liquids.
From the agricultural point of view this plant, due to its symbiosis with nitrogen-fixing bacteria, is used by farmers in the semi-arid regions of Rajasthan who follow crop rotation and use guar to replenish the soil with nitrogen before harvest. following.
Guar also plays an important role in human and animal nutrition, but the gelling agent in its seeds (guar gum) is the most important use.
Demand is increasing due to the use of guar gum in hydraulic fracturing (oil shale gas).
It is also used as fodder for feeding livestock, although due to the hydrocyanic acid present in its beans, only ripe beans can be used.
In addition, guar flour is widely used as raw material for the production of various types of cattle feed, fish feed, poultry feed, dairy feed, pig feed etc.
However, it is in industry that it is widely used.
Guar gum derivatives, which have undergone further processes, are used in industrial applications, such as the paper and textile industry, the flotation of minerals, the production of explosives and, as mentioned, the hydraulic fracturing (fracking) of formations of oil and gas. Guar gum is often cross-linked with boron or chromium ions to make it more stable and heat resistant. Guar and its derivatives produce gel complexes with ions of aluminum, zirconium, titanium, chromium and boron. Guar gum has proven to be a useful substitute for locust bean gum.
As for medicinal uses, guar gum, which includes as mentioned about 86% of water-soluble mucilage, is mainly made up of galactomannin. It is a delicately laxative gum that helps lower blood cholesterol levels and acts as a digestive tonic.
The gum can be taken internally as an effective but very mild bulk laxative. This also delays stomach emptying and therefore slows down the absorption of carbohydrates, thus helping to stabilize blood sugar levels, which can be of great importance for people with blood sugar problems, such as diabetics and pre-diabetics.
From a food point of view, guar leaves can be used like spinach and the pods are prepared as salads or vegetables. Its beans are nutritious, but the guar protein is not usable by humans unless it is roasted to destroy the trypsin inhibitor.
Also, in many foods and beverages, guar gum is used as an additive to change its viscosity or as a source of fiber.
It is used to improve baked goods, the texture of cheeses, the consistency of ice creams, as smaller ice crystals are formed, in frying because it decreases the absorption of oil.
An important use of guar also occurs in the ecological field and for agroforestry uses: the plant is grown as a green fertilizer and cover crop, and also as a shade plant for ginger and turmeric.
It is often grown as a catch crop with other annuals such as pearl millet, sorghum, corn, or cotton. It is also grown as a cover crop among young rubber trees or young coconut trees. As the only crop it is cultivated in rotation with maize, sorghum, cotton, wheat and vegetables.

Preparation Method –
Guar, as well as for the aforementioned uses, finds good use in the food sector.
The leaves are cooked and eaten as a vegetable, as are the seeds after cooking.
The seeds can also be sprouted and eaten. Unripe pods are eaten in curry, fried, salted, or dried for later use. However, the unripe pods must be cooked thoroughly to destroy a toxic principle. Only traces of this toxin remain in the mature pods.
The seeds, as mentioned, are used to produce guar gum, which is widely used by food manufacturers as a stabilizer and thickener in ice cream, baked goods, gluten-free foods, and foods such as salad dressings, yogurt, canned vegetables.
Traditionally, the leaves are eaten to treat night blindness.