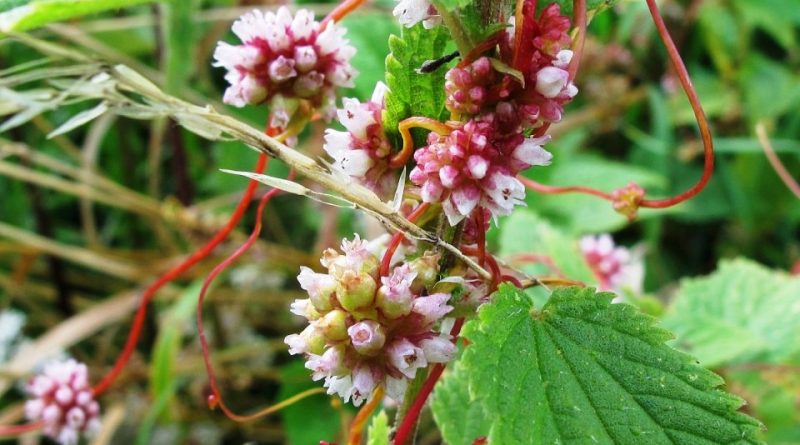 The Greater dodder (Cuscuta europaea L.) is a parasitic herbaceous species belonging to the Convolvulaceae family.

Systematics –
From the systematic point of view it belongs to the Eukaryota Domain, Kingdom Plantae, Magnoliophyta Division, Magnoliopsida Class, Solanales Order, Convolvulaceae Family and therefore to the Cuscuta Genus and to the C. europaea Species.
The terms are synonymous:
– Cuscuta major L .;
– Cuscuta vulgaris Pers ..

Etymology –
The term Cuscuta comes from the Arabic kúshuth.
The specific epithet europaea refers to the distribution of the species on the European continent.

Geographic Distribution and Habitat –
Greater dodder is a widely distributed Eurasian species and probably from China.
It grows in a vast range and is found from the Far East, such as in Japan to North Africa, through Western Asia and Europe. It is also present in India and Pakistan and in the Himalayas, where it extends from Kashmir to Sikkim at an altitude of 3,600 meters.
In Italy it is present in all regions with different intensity and distribution.
This plant, which lives as a parasite of various plants (hops, nettle, elder etc.) in open herbaceous vegetation, meadows and uncultivated fields, from sea level to about 1800 m.
Its original habitat seems to be that of open grassy locations, streams and hilly areas at altitudes between 800 and 3,100 meters in China. 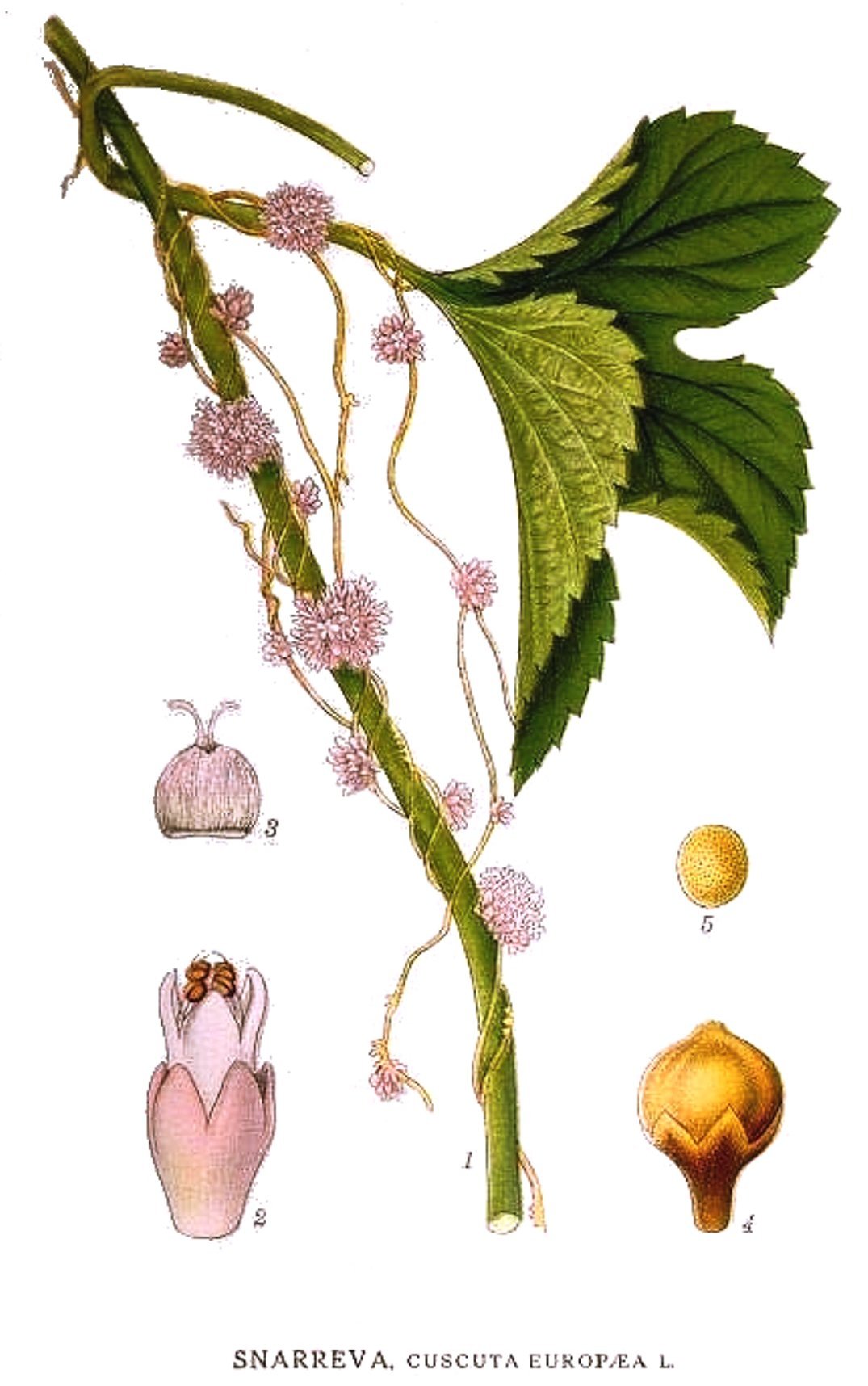 Description –
The Greater dodder is a perennial herbaceous plant consisting of a long greenish-yellow filament that reddens in summer, without chlorophyll, which normally grows between 10 and 40 cm in height, parasitic of other plants by means of special austors.
The leaves are reduced to microscopic scales.
The flowers are hermaphrodite, red-pink in color, gathered in dense spherical glomeruli.
It blooms from June to September.
The fruit is a foraminicidal capsule with a subspherical to pyriform shape of 1.4-2.5 (3) x 2-3.1 mm, often enlarged at the apex, glabrous with 2-4 ovoid or subglobose seeds of 0.9 -1.5 x 0.7-1.2mm.

Cultivation –
This plant is, as mentioned, a parasitic species, whose filamentous stem develops austori that attach themselves to the plants from which the Cuscuta gets its nourishment; this species lives on some plants and in particular on nettle or alfalfa plants, developing an intricate filamentous tangle.

Customs and Traditions –
This species introduced in some countries, such as in North America, has created many problems for farmers. Its diffusion, however, is very connected to the indiscriminate use of nitrogen fertilizers and agricultural specializations as well as some intensive practices.
Greater dodder in some eastern regions, including the eastern Himalayas in Nepal, is used as a traditional medicine to treat liver disease.
The pharmaceutical properties are: Carminative, digestive, sedative, cholagogue, diuretic, laxative. For external use it is used as a soothing and anti-inflammatory for the skin and mucous membranes.
Despite the fact that Cuscuta is frowned upon by farmers, it has a long history in the use of folk medicine. In Western herbal medicine, Cuscuta has traditionally been used, as mentioned, to treat the liver, spleen, and gallbladder disorders, in diseases such as jaundice, since it is an excellent support for liver function. It is still used, albeit rarely, especially by the most experienced herbalists. It is also a mild laxative. It is also highly regarded as a delicate diuretic, very selective for nitrogenous substances; it can also be used to treat sciatica and scurvy. It can be harvested fresh to be used externally, if applied to the skin it can cure some dermatoses such as scrofula. The extracts of the plant have a very bitter taste.
In traditional Chinese medicine, Cuscuta seeds, called tu si zi, have been used for thousands of years. In the Chinese conception of health, the yin aspects within the human being as well as outside must be kept in balance with the yang aspects. Ill health occurs when the energies and elements of the body are no longer in balance or are out of harmony with nature. Health is restored by taking the appropriate herbs and following the appropriate treatments to restore internal and external balance.
According to traditional Chinese healers, Cuscuta seeds have a neutral and pungent character, a sweet taste. They are associated with specific organs such as the liver and kidneys and are used in formulas that help both yin and yang deficiencies, depending on the patient’s condition and the other herbs in the formula. Cuscuta has been considered both an aphrodisiac and a longevity herb because it slows the loss of fluid from the body.
Contemporary and traditional Chinese herbalists use Cuscuta in formulas to treat a number of conditions, including:
– impotence;
– Premature ejaculation;
– Sperm leaks;
– Frequent urination;
– Ringing in the ears (tinnitus);
– Lower back pain;
– Sore knee;
– White discharge from the vagina (leukorrhea);
– Dry eyes;
– blurred vision;
– Tired eyes:
Greater dodder is one of nine herbs included in the manufacture of a Chinese herbal medicine recommended for kidney and prostate disorders. Research done at the Medical College of New York indicates that the combination of ingredients in this medicine could be effective in treating prostate cancer as well. The preparation inhibited the growth of cancer cells, increased the rate of self-destruction (apoptosis) of the cancer cells, and prevented the formation of colonies of surviving cells.
Cuscuta is also used in the Indian Ayurvedic healing system for the treatment of jaundice, muscle aches, coughs and urination problems.
Unfortunately, to date, little scientific research has been done on this plant in the West. A purgative component has been isolated from the plant and its traditional use as a tonic for the liver and gallbladder is confirmed. Other research done in Asian universities indicates that Cuscuta seeds contain a complex carbohydrate that stimulates the immune system and also has some antioxidant properties.
The chemical components contained are: Cuscutina (glucoside) which by hydrolysis gives a resinous substance, Cuscuterin; tannic acid, gum. The ashes contain phosphoric, sulfuric, magnesium and iron acids.
In general, the therapeutic uses are therefore: Acolia, Flatulent dyspepsia, Hepathargy, Burping, Hepatic dropsy, Meteorism, Biliary stasis, Constipation due to hepatitis.
As for possible contraindications and precautions in use, it seems that no special precautions are necessary when Cuscuta is used in the doses normally prescribed by herbalists.
In fact, an absence of side effects have been reported when Cuscuta is used in doses prescribed by herbalists.
Also regarding its possible interactions, it is reported that Cuscuta has been used for centuries with other Chinese herbs, with no reported interactions. Studies of interactions between Western drugs and dodder have not yet been carried out.

Preparation Method –
The part used in the Greater dodder is the whole plant and the optimal balsamic time is between June and August.
The plant can be used as soon as it is harvested to be used externally, if applied to the skin it can cure some dermatoses such as scrofula. Remember that the extracts of the plant have a very bitter taste.
In Western herbal medicine, all the dodder stems are used in the treatment. They are boiled in water with other herbs, such as ginger and spices to make a Decoction. In Chinese herbal medicine, only seeds are used. It is almost always used in combination with other herbs, such as Polipodio, Ligustrum, Curcuma, etc.