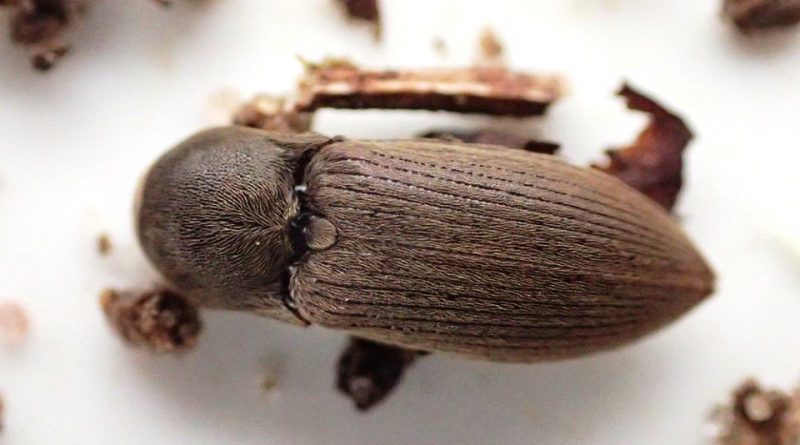 Geographic Distribution and Habitat –
Agriotes obscurus is a polyphagous insect native to Europe and which today has a wide spread present in various parts of the world.
In detail it is present in: Armenia, Austria, Azerbaijan, Belgium, Belarus, Bulgaria, China, Czech Republic, Denmark, Estonia, Finland, Georgia, Germany, Great Britain, Hungary, Ireland, Italy, Kazakhstan, Latvia, Liechtenstein, Lithuania, Luxembourg, Mongolia, Norway, Poland, Romania, Russia, Serbia-Montenegro, Slovakia, Slovenia, Spain, Sweden, Switzerland, Ukraine and Korea.
Its habitat is above all that of loose soils rich in organic matter where it lays its eggs both in the ravines and in depth.

Morphology –
The Agriotes obscurus is a small beetle whose adults have a size of 7-9 mm in length.
They have a brown-black body with ferruginous brown antennae; the prothorax is broader than long, convex, with strong tight punctuation.

Attitude and Life Cycle –
The adults of this insect appear in the period of June-July, moving on the ground or attempting short flights, remaining within a radius of a few tens of meters (for this reason the infestations are often localized, even in the same plot).
The favorable conditions for this beetle occur with temperatures between 17 and 25 ° C, showing a marked sensitivity to high temperatures (for this reason they carry out their activity at night). At night they erode the leaves. Shortly after the release, mating occurs, after which the females look for humid soils where they lay up to 200 eggs, grouping them in 5-6 elements arranged in a rosary, burying them a few centimeters.
Eggs are extremely sensitive to drought and die within minutes when exposed to dry air.
The larvae are born after 15 days of incubation and start trophic activity at the expense of the roots of spontaneous and cultivated herbaceous plants.
The moults take place in the period of August and October, deepening into the ground even up to 90 cm, to shelter from the rigors of winter.
Once the spring period arrives, with the increase in temperatures, they reappear on the surface, make a moult and continue the trophic activity and then make a new moult in autumn.
Larval development takes about four years, with two annual moults.
The maturity is reached after 8 mute, when the larvae create an earthy cell where go through metamorphosis. After a couple of weeks, having reached the adult form, the beetles come out and then mate and lay their eggs and begin a new cycle.

Ecological Role –
The damage of this insect is caused by the larvae that infest roots and other underground organs. Affecting the cereals they cause erosions on the hypogeal organs of young plants and damage the vegetative apex causing the apical leaf to dry out. Because of this, the plant dries up and if the infestation is significant, crop failures can occur.
On the potato plant, the larvae pierce the tubers by digging tunnels of varying length. The attack can be interrupted by the onset of summer drought, but the tubers remain marked by crater-like traces with radial furrows. In addition, there may also be damage to the tubers ready for harvesting, both in the case of late grubbing up and following rains that attract the larvae to the surface.
As for the interventions to limit the presence and therefore the damage due to the larvae of Agriotes obscurus, it is necessary to avoid the cultivation in succession to stable meadows for at least two years.
In the case of succession to alfalfa it is advisable to break them in the previous summer so that most of the larvae undergo the action of the summer drought; furthermore, the lawn must be broken immediately before sowing so that this beetle, together with other elaterids present, temporarily deepens under the worked layer and remains inactive until the first critical stages of the crop are overcome.
On the potato crop it is necessary to avoid late irrigations near the harvest to limit the ascent of the larvae.
Furthermore, it is advisable to adopt agro-ecological techniques to increase the biodiversity of company crops, the intercropping and the rotation technique.