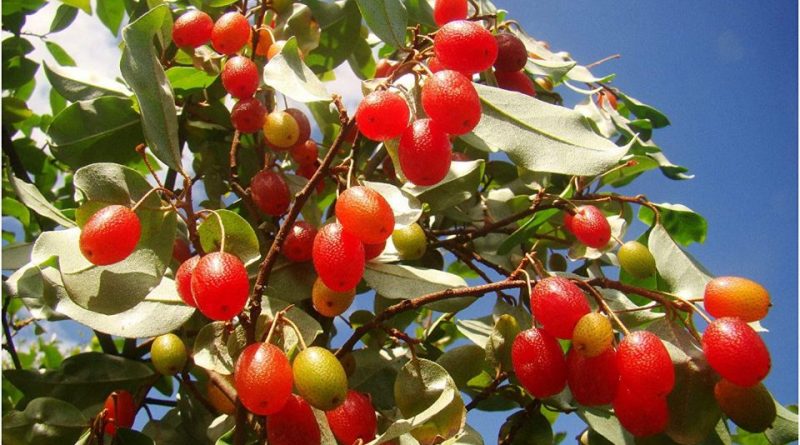 Systematics –
From the systematic point of view it belongs to the Eukaryota Domain, Kingdom Plantae, Magnoliophyta Division, Magnoliopsida Class, Proteales Order, Elaeagnaceae Family and therefore to the Genus Elaeagnus and to the E. multiflora Species.
The term is synonymous:
– Elaeagnus edulis Siebold ex Carrière.

Etymology –
The term Elaeagnus comes from the Greek ἐλαία elaía olivo and ἀγνός hagnos pure, white, perhaps in reference to the fruit.
The specific multiflora epithet comes from multus molto and flos floris fiore: with many flowers.

Geographic Distribution and Habitat –
The Cherry elaeagnus is a plant native to an area that includes China, Japan and Korea. However, the plant is present in other countries such as: Africa, Asia, Australia, Europe, North Africa, North America, Pacific, Philippines, Southeast Asia, Tibet and USA.
Its natural habitat is that of thickets and sparse woods in the hills and plains, at altitudes between 600 and 1800 meters. 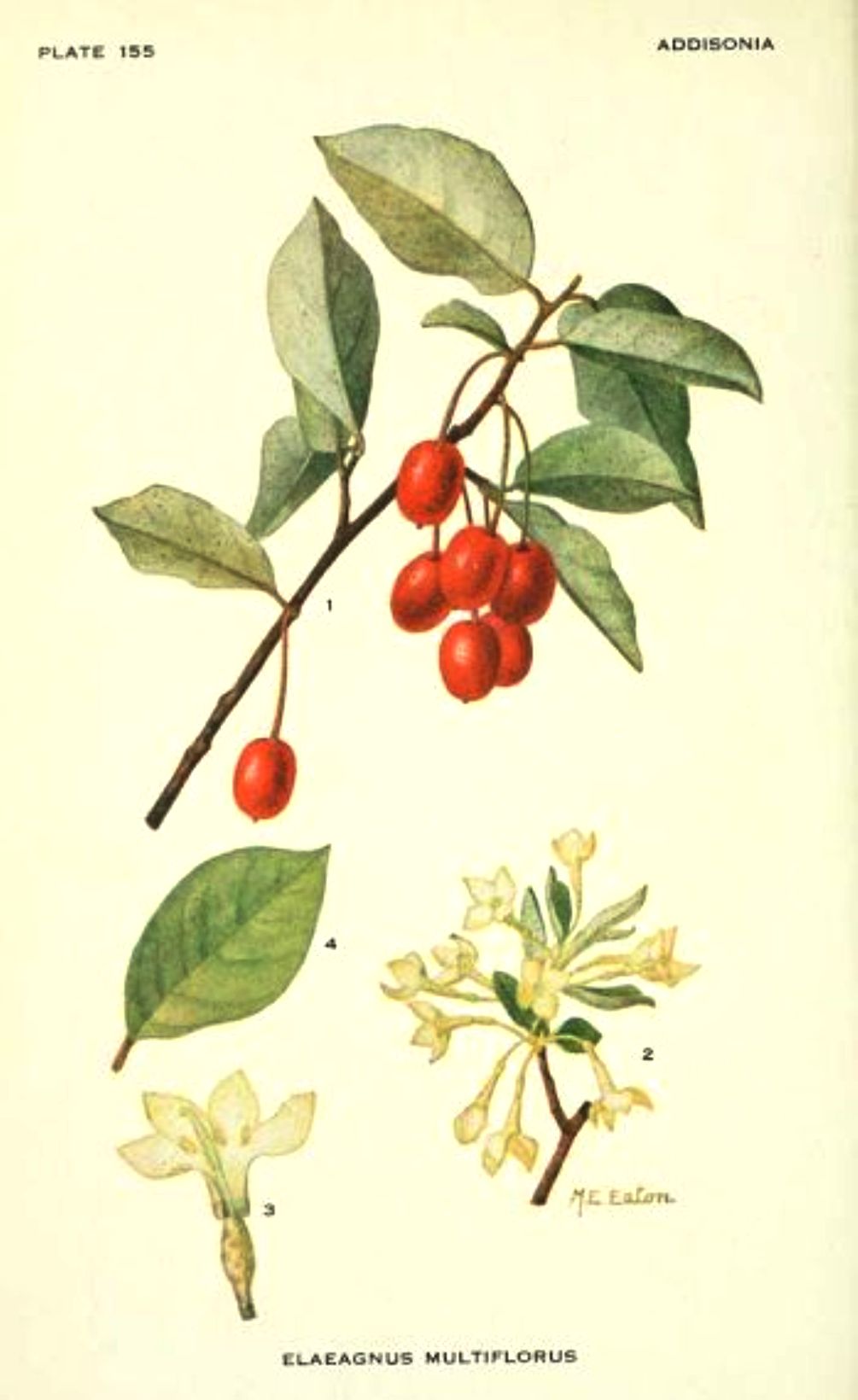 Description –
Elaeagnus multiflora is a deciduous shrub that develops on average with dimensions of 2-8 meters in height.
The trunk develops up to 30 cm in diameter with dark brown bark.
The shoots are densely covered with tiny red-brown scales.
The leaves are ovate to elliptical in shape, 3-10 cm long and 2-5 cm broad, green in color on the upper side and silvery – brown-orange on the lower side with small dense scales.
The flowers are solitary or in pairs, carried to the axil of the leaves, perfumed, with a pale yellowish-white quadrilobed corolla, 1.5 cm long.
The antesis is between April and May and the seeds ripen in July. The species is hermaphroditic (has both male and female organs) and is pollinated by bees.
The fruit is a drupe, round to oval in shape, 1 cm long, orange in color with silvery flakes, which then turns red when ripe, dotted with silver or brown, hanging on a 2-3 cm peduncle. When ripe, between the middle and the end of summer, the fruit, which is edible, is juicy and edible, with a sweet but astringent flavor somewhat similar to that of rhubarb. The peel of the fruit is thin and fragile, making it difficult to transport, thus reducing its vitality as a food crop.

Cultivation –
The Cherry elaeagnus is a rustic plant, present in numerous species and varieties, many of which bloom in late summer and early autumn. All species are characterized by the production of berries, red or silver in color.
For cultivation it prefers the position in full sun. It is planted from October to December even in poor, shallow and calcareous soil. It can be used to form windbreak barriers: in this case the subjects are planted at 60 / 90cm from each other and all the branches are shortened by 1/3 to obtain very dense plants. It does not need care, in April / May the most vigorous branches can be shortened to reduce a greater branching. If grown as a hedge it is pruned in June to maintain the desired shape.
As with other species of the genus Elaeagnus, the roots of E. multiflora plants grow in symbiosis with the actinobacterium Frankia.
These bacteria fix atmospheric nitrogen, making it available in usable form for the host plant and indirectly for other nearby plants. This feature allows the plant to grow in poorer soil than it otherwise could.
For the cultivation technique, see the following sheet.

Customs and Traditions –
Elaeagnus multiflora is a plant known by various names in various parts of the world such as: Cibie, Goumi, Gumi, Longipe bush, Mupan-hsia, Natsu-gumi, etc. and which is occasionally cultivated in Europe and North America as an ornamental plant and for its fruits. It is an exotic species established in parts of the eastern United States.
Plants can also be grown as a hedge in exposed locations, tolerating maritime exposure. It is often used as a rootstock for evergreen species that are difficult to grow by cuttings.
It is also a very appetizing plant for birds that feed on its berries.
The fruit of this plant, like many members of this genus, is a very rich source of vitamins and minerals, especially vitamins A, C and E, flavonoids and other bioactive compounds. It is also a pretty good source of essential fatty acids, which is quite unusual for a fruit. It is being studied as a food that can reduce the incidence of cancer and also as a means to stop or reverse the growth of tumors. The leaves are used in the treatment of cough. The fruit is prescribed in the treatment of watery diarrhea. The root is astringent, a decoction is used to treat unsightly itching and sores.

Preparation Method –
The parts used of this plant are: fruits, seeds and leaves.
The fruits of this plant are consumed naturally or to prepare jams or sweets and can be eaten both raw and cooked.
They have a pleasantly acidic flavor when ripe, from which an excellent dessert fruit is also obtained.
The fruit is somewhat complicated and difficult to harvest without breaking the young shoots; furthermore the fruit must be completely ripe before it can be tasted raw, even if it is slightly under-ripe it will be quite astringent. The fruit contains a single large seed that can be eaten with the fruit even if it is quite fibrous.