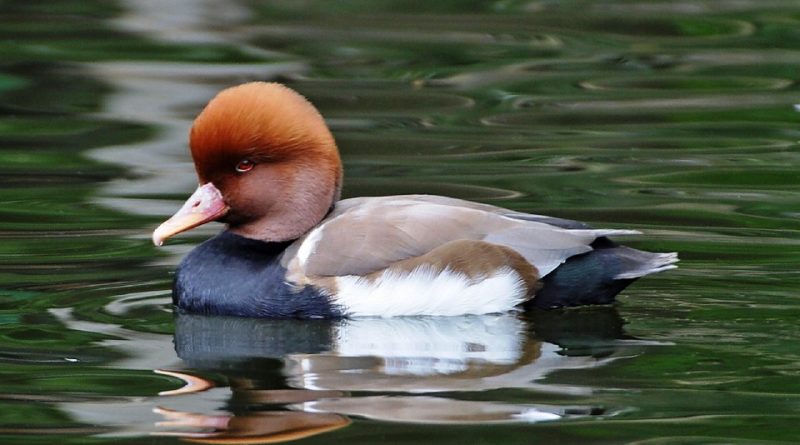 The Red-crested pochard (Netta rufina, (Pallas, 1773)) is a bird belonging to the Anatidae family.

Geographic Distribution and Habitat –
The Red-crested pochard is a bird widespread in Europe, Agrica and Asia.
In Europe it is widespread as far as Turkey. In Italy it nests in the Po Valley, and in Sardinia, always near the water.
Some populations are migratory, others sedentary and still others erratic. Northern populations winter further south and in North Africa.
It prefers the northernmost areas but not beyond the 55th parallel.
Its nesting habitat is represented by swamps and lowland lakes, especially in reeds, in southern Europe and southern and central Asia. 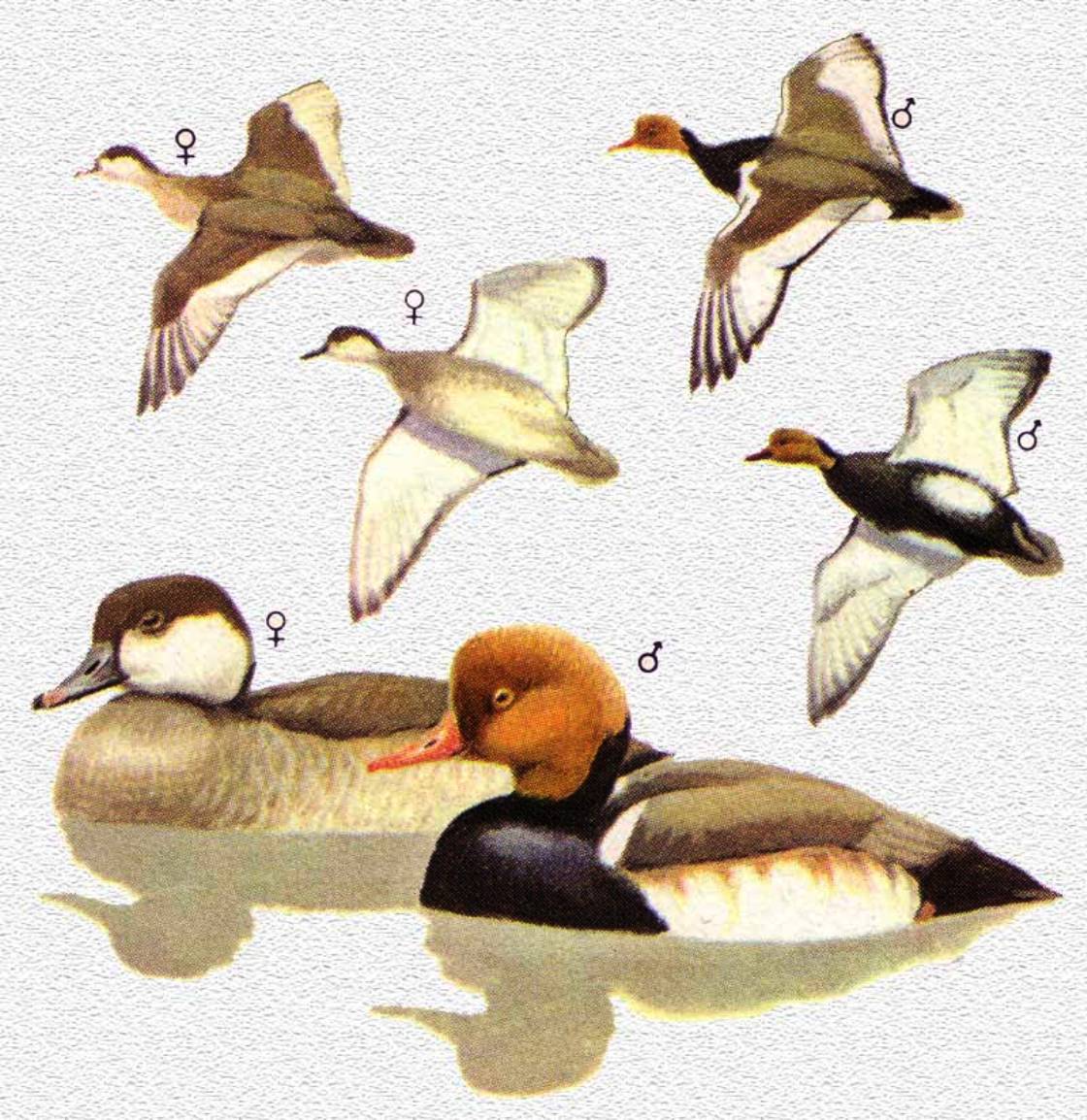 Description –
The Netta rufina is a bird with evident sexual dimorphism, with a size of 54-58 cm.
The adult male has a rounded orange head, a red beak and a black breast. The flanks are white, the back is brown, and the tail is black.
The female is almost entirely pale brown in color, with a darker back and whitish top of the head and face.
The wings in flight show a wide white band on the rear edge. Eyes and beak of coral red color. In eclipse the plumage is dull and dull. The legs are grayish-orange.
The young specimens are similar to the females but with a darker back.

Biology –
The female of the Red-crested pochard, arrived in the period of April – May, builds a nest which she covers with a down that tears from under the belly.
The nest is built in the lake areas, in the middle of vegetation and reeds where it lays 8-12 pale green eggs.
The hatching period of the female lasts 26-28 days, leaving them for a few minutes a day to eat and bathe their plumage.
The chicks, vital like those of the other ducks, closely resemble those of the mallard even if they have a slightly more tawny color.
The sexes of the young begin to differentiate only in late autumn. In the middle of winter the males, young and healthy adults already have the nuptial livery.
The reproduction in captivity is also quite easy and does not present particular difficulties even in the presence of other anatids.

Ecological Role –
The Red-crested pochard is a very silent duck and is appreciated as a pet for its easy adaptability, beauty and ease of breeding.
It is a bird with a diet based on insects, small fish, seeds, molluscs, sprouts, snails and larvae that it finds in water by diving or partially submerging. They generally feed on more surface than most diving ducks.
From the behavioral point of view, the Netta rufina is a gregarious bird that forms large flocks in winter, often mixed with other diving ducks, such as pochards.
As for the conservation status of this species, according to the IUCN, it should be noted that in the British Isles, this species is quite confused due to the fact that over the years there have been many deliberate escapes and releases, so as presences of natural visitors from the continent. However, it is more likely that they are escaped specimens that have now reproduced in the wild and formed a successful wild population.
In these areas they are most numerous in areas around England, including Gloucestershire, Oxfordshire and Northamptonshire. Wild birds occasionally return to places such as the Abberton Reservoir in Essex.
Furthermore, the Turkish fistione is one of the species protected by the Agreement on the Conservation of African-Eurasian Migratory Waterbirds (AEWA).