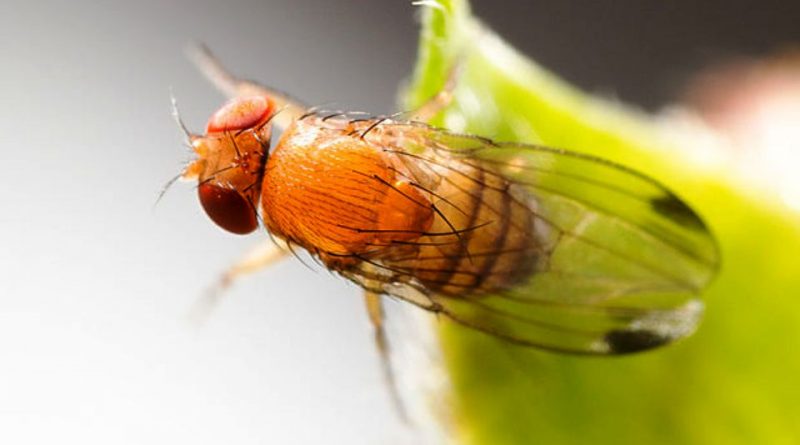 The Spotted wing drosophila (Drosophila suzukii Matsumura, 1931) is a small insect belonging to the Drosophilidae family.

Geographic Distribution and Habitat –
The Spotted wing drosophila is a small insect that, most likely, comes from Southeast Asia and in particular from the CIA.
From this range it was then transferred to the United States where it was found in 2008. In Europe it was recently found in Spain where, however, it does not appear to have caused damage to crops.
It was also found in Italy where the Phytosanitary Service of the Tuscany Region reported some time ago (2009) the discovery of the phytophagous in its territory. In addition, in 2009 attacks were also reported in Trentino and in recent years some red vines have also begun to be affected, with subsequent problems of rot and microbial infections.

Morphology –
Drosophila suzukii is an insect of about three millimeters in length, characterized by the presence of large red eyes.
The adult insect has a honey-brown body, with dark bands on the dorsal part of the abdominal segments.
The male has a distinct dark spot near the tip of each wing, a feature not present in the female.
In the female, a strongly serrated ovipositor is evident, which it uses to engrave the epidermis of ripe fruit still on the plant.

Attitude and Life Cycle –
Drosophila suzukii, unlike the fruit fly and other similar species, which are mainly attracted to rotten fruit, attacks fresh and ripe fruit, depositing eggs under the epidermis.
The female, through its very robust ovipositor, engraves the fruits directly on plants of raspberry, blackberry, blueberry, strawberry, etc., inserting the egg into the pulp.
After 2-3 days, the larvae that hatch and develop in the fruit, cause in the area affected by the lacerations, a depressed and soft area is formed, which causes the fruit to go rapidly to decay, canceling its commercial value.
The small holes produced by the oviposition by this midge in fact expose the fruits to pathogens (such as bacteria, fungi and yeasts). Finally, fruit spoilage can increase its sensitivity to attacks from other Drosophila species.

Ecological Role –
Due to the particularity of this small insect, the fight is particularly difficult due to the peculiarity of the Drosophila suzukii of laying eggs inside the fruits during ripening.
To counter its proliferation, it is appropriate to take action against adults through food traps which are intended to monitor their presence and verify the consistency of the flights but not to identify the most suitable time for intervention.
In addition to monitoring, it is also necessary to combine some agronomic practices with chemical control.
Agronomic practices essentially consist of:
– Pruning operations that tend to facilitate the penetration of light into the canopy, with the aim of uniform fruit ripening for a faster and more concentrated harvest;
– Harvest planning, anticipating, where possible, the harvest period when the fruits take on the red color, before physiological ripening.
– Collection and elimination of fruits not suitable for trade;
– Decrease in crop specialization and application of agro-ecological practices such as: presence of rows of plants not sensitive to gnats, hedges, smaller plots, increase in company biodiversity, etc.
The chemical fight, in addition to compromising the equilibrium of natural biocoenoses, should not be carried out in order not to leave residues on food production and not to interfere in the pollination of other species.
At the limit, it is advisable to intervene with natural pyrethrum, alternating with other insecticidal products allowed in organic farming.
Even in the vineyards it is necessary to adopt control strategies aimed at minimizing damage, based on capture and agronomic practices, such as the removal of fermentable plant residues.
It should be noted that due to the recent introduction this small insect does not yet have natural antagonists, but for the producers it is important to practice good practices in the management of the vineyard. Even in the existing ones, therefore, it is advisable to carry out good monitoring with the use of traps, the correct management of the rows, with an appropriate leaf removal to aerate the clusters, their thinning and the timely elimination of rot.