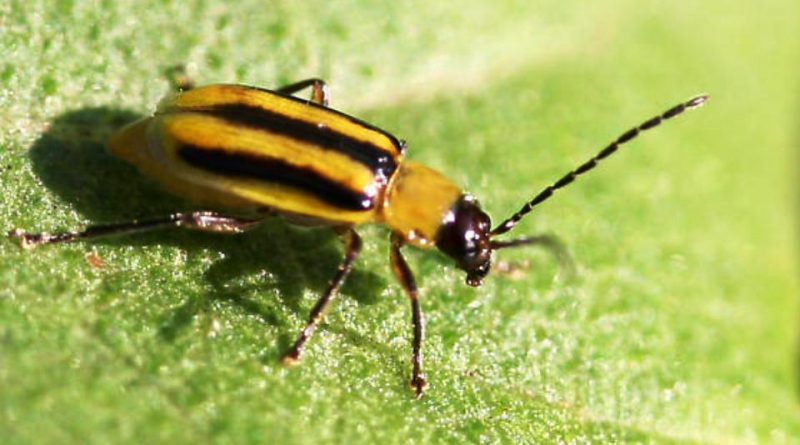 The Western corn rootworm (Diabrotica virgifera LeConte, 1868) is an insect belonging to the Chrysomelidae family.

Geographic Distribution and Habitat –
The Western corn rootworm is an insect of American origin and precisely of the United States, where it is considered the main phytophagous of corn. Until 1955 the chrysomelid remained confined to its range of origin, that is in the western part of the USA, then it rapidly spread eastwards and now it has settled in Mexico, Central America, where there are also other species of Diabrotica and in South America.
This insect arrived for the first time in Europe in 1992 in Serbia while in Italy it was caught for the first time in 1998 at the Venice airport. In the following years it was reported in other regions of Northern Italy.
It is currently widespread in particular in Northern Italy in the main maize areas. It is present in numerous European countries (in particular Serbia, Croatia, Hungary, Romania, Bulgaria, Bosnia and Switzerland); in America it is widespread in Canada and the United States.

Morphology –
Diabrotica virgifera, at the adult stage, has a yellow – brownish color and with dimensions of 5 – 6 mm in length, with evident sexual dimorphism.
Males have dark elytra with yellowish caudal part; the females have three symmetrical dark stripes on a yellowish background. Furthermore, the antennae of the males are longer than those of the females.
The eggs are recognized by their size of about 0.65 x 0.45 mm and with a color that is generally pale yellow.
Mature larvae measure 12 – 18 mm in length and appear wrinkled, whitish in color with a dark head and a brown plaque on the upper part of the last abdominal segment. Before reaching maturity these go through three stages of development.
The pupae are white in color.

Attitude and Life Cycle –
The Diabrotica virgifera overwinters in the egg stage which has been laid in the ground at a depth of about 15 cm in the period of July – August.
After about a week from the flickering, the first mating occurs, which continue for the entire life period of the adults; both males and females can mate multiple times in their life. Thanks to the action of the wind or by exploiting different vectors including humans, adults can move up to 25 – 40 km a year. Only one generation per year is carried out.
The females lay the eggs in small groups and complete the laying in about 20 days preferring moist and loose soils. A female lays a few hundred eggs in the ground at a depth of about 15 cm. Female fecundity is influenced by temperature, photoperiod and food availability; on average 400 eggs are laid even if their number can vary from about 100 to 1000. Furthermore, the depth of deposition is influenced by the texture of the soil, becoming more superficial in heavy soils. The egg begins to hatch from the middle of the following May with a peak of births that comes around the middle of June.
The larvae that are born from it move in the ground feeding on the roots of corn and various other grasses and their development lasts about a month. The larvae are found in the areas of Northern Italy starting from the month of May with a peak around mid-June, although the hatching can last until the beginning of July.
After three larval stages, the pupa is hardly visible in the soil as the metamorphosis takes place in 1-2 days.
This insect makes one generation a year.
In the areas of the Po Valley, adults fly from June to October with a peak between the end of June and the first ten days of July, in correspondence with the flowering of the corn, after which the adult populations remain in constant decline. Adults are more active at a temperature between 23 and 27 ° C; while in the hottest hours, when the temperature exceeds 30 ° C, they aggregate on the portions of the plant less exposed to the sun, protected by the bracts of the ear or by the leaf sheaths.
Adults live between 50 days and three months depending on climatic variables and food availability.
The damage is due to the larvae which, feeding on the rootlets and digging tunnels in the largest roots, cause the greatest damage to the corn. The plant, damaged as a result of their trophic action, has a reduced root development that makes it more subject to enticements, reduces its capacity to absorb water and nutrients and, during harvesting operations, causes greater production losses. A fairly typical symptom that is found in cases of high larval infestation is the presence in the field of “goosenecked plants”, that is, of enticed plants that tend to rise from the ground by bending and forming elbows.