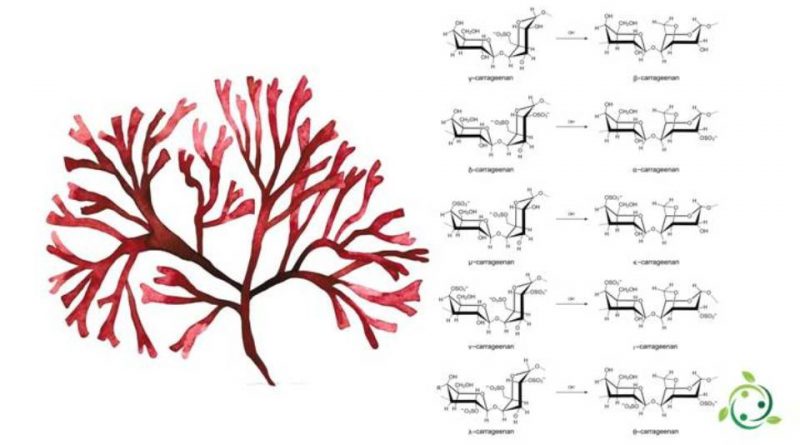 Carrageenan is a product derived from the town of Carragheen in Ireland.
Carrageenan is a substance with thickening properties that is extracted from some red algae that live in the waters of the North Atlantic (Chondrus crispus and Gigartina mamitiosa, also called carragheen, Irish moss or marine lichen).
Carrageenan was introduced on an industrial scale in the thirties of the twentieth century, but was already used in China in 600 BC. and in Ireland in 400 AD. Today, the largest producer of carrageenan is the Philippines, whose production accounts for 80% of world consumption.
Today, carrageenan is used as a gelatine of wide food, medicinal and industrial use (used to clarify honey, beer, for the manufacture of paper, dressings and more) especially in Ireland and Great Britain. This jelly is obtained by boiling the two aforementioned red algae.
Carrageenan essentially consists of calcium, potassium, sodium and magnesium salts of sulfuric esters of polysaccharides which, by hydrolysis, give galactose and 3,6-anhydrogalactose. Carrageenan must not be hydrolyzed or otherwise chemically degraded. It comes in the form of a powder with a coarse to fine consistency, yellowish to colorless and virtually odorless.
Carrageenan contains molecules that could reduce the production of gastric and intestinal secretions. It also seems to help reduce pain and swelling associated with inflammation. Finally, it could have a laxative effect.
Based on assumptions of this type, carrageenan is proposed in the treatment of ailments such as cough, bronchitis, tuberculosis, peptic ulcer and intestinal problems, in particular against constipation.

It is also an ingredient in several weight loss products.
However, we remind you that there is still insufficient scientific evidence to certify the effectiveness of the use of carrageenan as a remedy in any of these cases. Furthermore, please note that the intake of carrageenan could interfere with that of antihypertensive drugs, oral antidiabetic drugs, anticoagulants and antiplatelet agents.
Among other things, in some studies conducted on mice, some authors found that carrageenan, even in high doses, does not cause the onset of tumors; in limited cases it can contribute to their growth, but only in the presence of high doses of other nitrogenous compounds.
On food labels, where it is also used as a gelling agent, it is indicated with the initials E407. Medicines can also contain it as a stabilizer and thicken. It can also be present inside toothpastes and, at times, is applied directly to the skin to relieve particular discomfort.
This substance is widely used as a gelling agent in pudding and jelly in cakes and pies, it is even sold pure in sachets with many trade names.
In the United States, the FDA authorizes the use of carrageenan as a food additive and considers it safe for the quantities normally used in its use as an emulsifier, stabilizer or thickener. The FDA also monitored the safety of carrageenan in infant formulations.