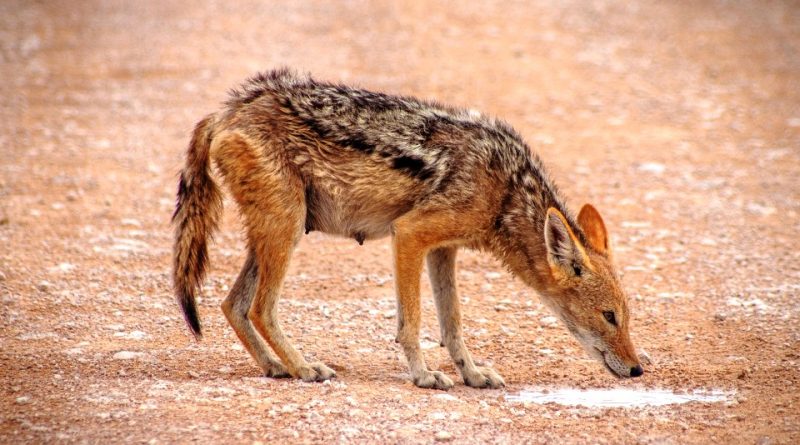 The golden jackal (Canis aureus Linnaeus, 1758) is a mammal belonging to the Canidae family.

Systematics –
From the systematic point of view it belongs to the Eukaryota Domain, Animalia Kingdom, Phylum Chordata, Mammalia Class, Carnivora Order, Canidae Family, Caninae Subfamily, Canine Sub-tribe and therefore to the Canis Genus and to the C. aureus Species.
Within this species, given the vast distribution range, some subspecies are recognized; nevertheless this genetic separation and collocation is still the object of deepening and clarification.
Below are listed, in the light of today’s knowledge, what are considered the existing subspecies:
– Canis a. aureus; Common jackal, which is the nominal subspecies. Of large size, it has a soft light coat with predominantly sandy tones;
– Canis a. cruesemanni; Siamese jackal, which is smaller in size than C. a. indicus. Its status as a subspecies has been questioned by various authors, who maintain that the classification of this breed is based solely on the observation of specimens in captivity;
– Canis a. ecsedensis; Pannonian jackal;
– Canis a. indicus; Indian jackal, which has a coat made of a mixture of black and white hair, with brown shoulders, ears and legs. Specimens living at higher altitudes tend to take on more pronounced brown tones. Black hair predominates in the center of the back and on the tail. The belly, chin and sides of the legs are creamy white while the face and the lower part of the hips are grizzled with gray fur. Adults reach a length of 100 cm, a height of 35 – 45 cm and a weight of 8 – 11 kg;
– Canis a. moreoticus; European jackal, which is one of the largest subspecies; the specimens of both sexes measure 120 – 125 cm in length and weigh 10 – 14.9 kg. [7] [28] The coat is coarse and generally of bright colors that take on a blackish hue on the back. The thighs, the upper part of the legs, the ears and the forehead are bright reddish brown;
– Canis a. naria; Sri Lankan jackal, which is 67 – 74 cm long and weighs 5 – 8.6 kg. The winter coat is shorter and rougher and not as shaggy as that of C. a. indicus. Compared to the coat of the latter, it also has a darker back, being black and flecked with white. The lower regions are more pigmented on the chin, back of the throat, chest and front of the belly, while the legs are ocher, rust or reddish brown. The moult occurs earlier than in C. a. indicus and generally the hair does not lighten;
– Canis a. syriacus; Syrian jackal, which weighs 5 – 12 kg and is 60 – 90 cm long. [30] It is characterized by the other subspecies for its brown ears. Each hair on the back consists of four distinct colors: white at the root, then black, fox red and again black at the tip.

Geographic Distribution and Habitat –
The golden jackal is a medium-sized mammal found in southeastern and central Europe, Africa, Asia Minor, the Middle East and Southeast Asia.
In particular, its range extends from Senegal on the north-western coast of Africa to Morocco and the Mediterranean region to the north, through the north-eastern region of Congo and Kenya. In addition, it is found in Asia Minor, in south-eastern Europe, in the Anatolian peninsula, in the Caucasus and in southern Asia up to Burma and Thailand.
In Italy it is present in Friuli-Venezia Giulia, in the provinces of Udine and Trieste, and in Veneto, in the provinces of Belluno and Treviso.
Its preferential habitat is above all in open areas but also in bright woods and near inhabited areas. 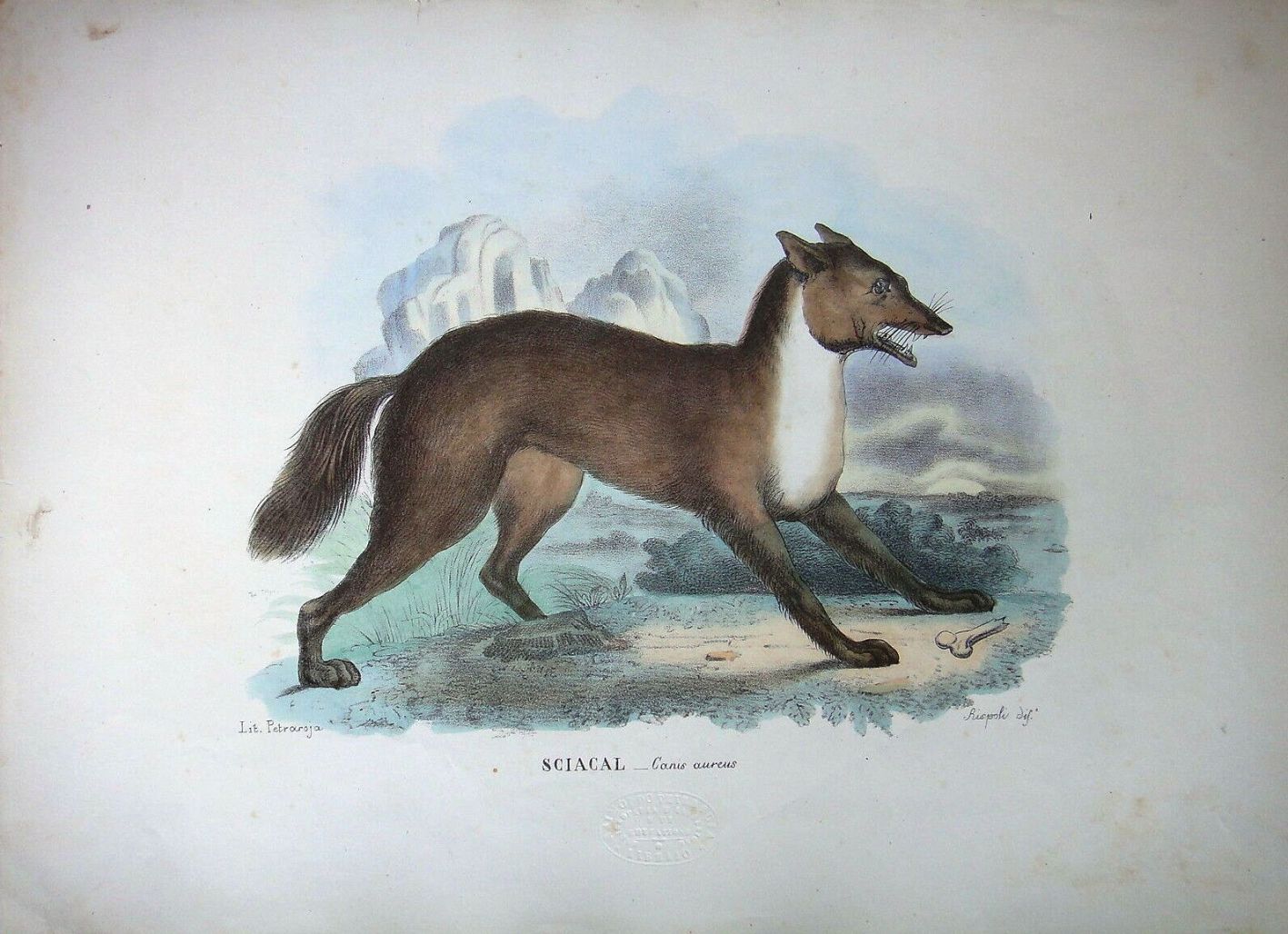 Description –
The Canis aureus, although similar to a small-sized gray wolf, is leaner, with a narrower muzzle, shorter tail, and lighter stride.
It has a certain sexual dimorphism, with the male larger than the female, and has a head-body length of 65-105 cm, a tail length of 18-27 cm, a height at the withers of 40-50 cm for a weight that in males it is 8-14 kg and in females 7-12 kg.
The winter coat differs from that of the wolf in its more tawny-reddish shades. In the upper part it is gray-yellowish-black in color suffused with fawn (gray-brown in young people); below gray-whitish.
It has a narrow and pointed muzzle, large pointed ears, yellow-brown eyes.
The legs are medium-long and the tail is medium-short.
The verses are: howls, barks, yelps, growls, moans, scagni, etc ..

Biology –
The biological cycle of this mammal, due to its widespread diffusion, is linked to the climatic characteristics of the area where it lives. It reaches sexual maturity in the year following birth. In Trans Caucasia, estrus begins in early February or late January during the hottest winters. In Tajikistan and Uzbekistan, the mating season continues until early March. In males, spermatogenesis occurs 10 – 12 days before females enter estrus and during this time their testes triple in weight. The estrus lasts 3 – 4 days and the females who fail to mate in this period undergo a loss of receptivity which lasts 6 – 8 days.
The moment of mating is during the day; at the end of it the partners remain attached for 20 – 45 minutes. The couples are monogamous and remain together until the death of one of the partners. The males take part in the breeding of the young and also dig the den destined for them. The gestation period lasts 60 – 63 days.
In the regions of the Transcaucasian area, the young are usually born in late March and early April while in north-eastern Italy, most likely, at the end of April; in Nepal, however, they can be born at any time of the year.
The litters are made up of 3 – 8 pups that are born with their eyes closed and with a soft fur that varies in color from light gray to dark brown. At one month of age, this hair falls out and is replaced by a new reddish coat with black speckles.
The breastfeeding period varies in duration depending on the location: in the Caucasus it lasts 50 – 70 days, while in Tajikistan it can last up to 90 days.
The young begin to eat meat at the age of 15 – 20 days, although they are rarely fed regurgitated food.
These have a very fast growth and already at two days weigh 201 – 214 g; at one month 560 – 726 g and at four months 2700–3250 g.
When the breastfeeding phase ends, they are removed from the mother. Additionally, pups from previous litters can stay with their parents to help them raise the next litter, although their sexual behavior is suppressed.
In some areas, such as in the Trans Caucasus, females give birth in burrows dug with the assistance of the males but sometimes they take over the dens abandoned by foxes or badgers. The den can be found either in dense shrubs, on the slopes of gullies or on flat surfaces. The golden jackal makes a lair with a simple structure with a single entrance that leads to a cave at a depth of 1-1.4 meters. In Dagestan and Azerbaijan, litters are sometimes given birth in the crevices of dead trees, among tree roots or under stones along rivers. In Central Asia, the jackal does not dig burrows but takes refuge in tugai bushes. The jackals of the Vahš tugai dig three-meter-long burrows under the roots of trees or in thick bushes.

Ecological Role –
Canis aureus is considered the progenitor of some dog breeds; moreover, despite its informal name, it is not closely related to the black-backed jackal and the striped jackal, being instead more related to the gray wolf, the coyote and the caberù. This mammal can produce fertile hybrids with both gray and African wolves.
The jackal plays an important role in Middle Eastern and Asian folklore and literature, where he is often depicted as a deceiver, analogous to the fox and the coyote in European and North American fairy tales.
It has mainly crepuscular-nocturnal habits .; mostly solitary species or in pairs. Furthermore, when it hunts, it only rarely forms small groups, although in summer, in Transcaucasia, multifamily herds of 8 – 12 specimens have been observed.
When it hunts alone, it patrols a certain area, stopping every so often to smell and listen and, once it has identified the prey, it hides, approaches slowly and then launches the attack. When hunting in pairs or in packs, the various individuals run side by side and strike their prey in unison. When hunting rodents or waterfowl, they run along both sides of a narrow stream or stream, directing their prey from one specimen to another.
From the food point of view it has opportunistic eating habits: it is both a predator and a scavenger and during certain seasons it quietly eats waste and vegetables. In the former Soviet Union, jackals mainly hunt hares, small rodents, pheasants, partridges, ducks, coots, moorhens and passerines. They also eat lizards, snakes, frogs, insects, fish, and shellfish. During the winter they catch many otters and anseriformes. During these times, jackals kill far more animals than they can eat. They also eat various fruits, such as pears, hawthorns, dogwoods, and the fruits of the common medlar. In spring, they dig for bulbs and roots of wild sugar cane. In summer, jackals drink regularly and often stop by water sources. In times of drought, they dig holes in dry canals, drink the water collected in the ground, and eat dead fish and birds that have come ashore to drink. In the vicinity of human settlements, jackals roam in search of food at slaughterhouses, landfills and places where dead cattle are buried. In Dagestan, in the 1920s, jackals used to go to eat along the railway lines, feeding on the remains of food thrown off the train by passengers. In areas of Hungary the most frequent prey are the field vole and the reddish vole.
In north-eastern Italy, even if the information is fragmentary, the diet of jackals is based on small roe deer and hares. In Turkey they eat the eggs of the very rare green turtle. Pairs of jackals have been seen capturing forelegs in northwestern Bangladesh.
In general, however, the diet of Canis aureus is based on small mammals, terrestrial birds and their eggs, insects and other invertebrates; carrion and remains abandoned by other animals, fruits and other parts of plants.
According to the IUCN, Canis aureus is one of the least endangered species, since it has a very vast range where it finds abundant food and shelter. In fact, it is a very adaptable animal, capable of exploiting numerous sources of food, from fruits and insects to small ungulates.