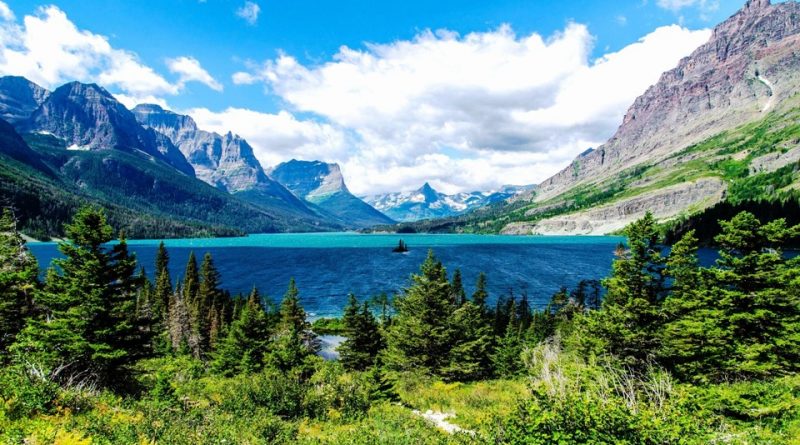 Glacier National Park, whose WDPA code is: 11111516, is a United States National Park located in Montana, bordering the Canadian provinces of Alberta and British Columbia.
The park, which includes over 4,000 km2, includes two mountain ranges, over 130 lakes, over 1,000 plant species and hundreds of different animal species. This vast ecosystem has been defined as the “summa of the continental ecosystem”.
From an archaeological and historical point of view, based on archaeological findings, Native Americans arrived in the park area for the first time about 10,000 years ago.
Many Indian tribes have succeeded one another as rulers of the region in which the park is today, including the Cheyenne and the Blackfeet, of which there is a reserve on the eastern edge of the park.
The famous expedition carried out by the two explorers Lewis and Clark passed just 80 kilometers from this region in 1806, while a series of more in-depth explorations were conducted throughout the nineteenth century, among which it is worth mentioning those of the railway engineer John Frank Stevens.
Just the latter in 1891, caused the Great Northern Railway railway company, to cross the Continental Divide, or the watershed that divides the basin of the rivers that end in the Atlantic Ocean and those that end in the Pacific Ocean, thus skirting the entire glacier area.
Precisely to stimulate the use of this railway, the company asked the United States Congress to preserve the area by establishing a national park, for the protection of forests and glaciers and so it was therefore that on 11 May 1910 the Glacier National Park (Glacier National Park).
Although the Glaciers National Park owes its name to the approximately 150 glaciers present inside it at the time of its establishment; however, due to the retreat of glaciers due to climate warming, in 2010 there were just 37 glaciers left, of which only 25 could be considered still active and with an area of ​​at least 10 hectares.
Glacier National Park is dominated by mountains that were deeply carved by the glaciers of the last glaciation, which have almost completely disappeared over the last 15,000 years.
This area is very sensitive to the planetary climate change that began in the twentieth century and for this reason since 1992 a research center of the United States Geological Survey has kept them under constant observation to obtain statistical data to compare with those of other laboratories obtained from other areas of the planet identified according to certain parameters.

Flora –
The area of ​​the Glaciers National Park is part of a large preserved ecosystem known collectively as “the crown of the continent ecosystem”, which is mainly a still wild and unspoiled natural area. Virtually all the plants and animals that existed at the time when European explorers first entered the region are present in the park today.
Over 1,132 plant species have been identified throughout the park. The predominantly coniferous forest is home to various tree species such as the Engelmann fir, Douglas fir, subalpine fir, agile pine and western larch, which is a deciduous conifer, which produces cones but loses its needles. every autumn. Poplars are the most common deciduous trees and are found at lower elevations, usually along lakes and streams.
The treeline on the eastern side of the park is nearly 244m lower than on the western side of the Continental Divide, due to exposure to the colder winds and weather conditions of the Great Plains. West of the Continental Divide, the forest receives more moisture and is better protected from the winter cold, resulting in more densely populated with taller trees. Above wooded valleys and mountain slopes, alpine tundra conditions prevail, with grasses and small plants surviving in a region that enjoys just three months without snow cover. Thirty plant species are found only in the park and the surrounding national forests. Beargrass, a tall flowering plant, is commonly found near sources of moisture and is relatively common in July and August. Wildflowers such as Monkeyflower, glacier lily, fireweed, Balsamorhiza and Indian brush are also common.
Wooded areas fall into three main climatic zones. The west and north-west are dominated by spruce and fir and the south-west by red cedar and hemlock; the areas east of the Continental Divide are a combination of mixed areas of pine, spruce, fir and prairie. The cedar-hemlock groves along the Lake McDonald valley are the easternmost examples of this Pacific climate ecosystem.
Communities of white bark pine have been severely damaged due to the effects of blister rust, a non-native fungus. In the park and surrounding region, 30% of the white-barked pines have died and more than 70% of the remaining trees are currently infected. White-barked pine provides a high-fat pine cone seed, commonly known as pine nut, which is a favorite food of red squirrels and Clark’s nutcracker. Both grizzlies and black bears are known to raid the pine nut deposits of squirrels, a favorite food for bears. Efforts to control the spread of bladder rust between the 1930s and 1970s were unsuccessful and continued destruction of white-bark pines seems likely, resulting in negative impacts on dependent species.

Fauna –
Virtually all historically known plant and animal species, with the exception of the bison and woodland caribou, are still present, providing biologists with an intact ecosystem for plant and animal research. Two endangered species of mammals, the grizzly bear and the lynx, still populate the park. Although their numbers remain at historical levels, both are listed as threatened because in nearly all other regions of the United States outside Alaska, they are extremely rare or absent from their historical range. On average, one or two bear attacks on humans occur each year; Since the park’s creation in 1910, there have been a total of 10 bear-related deaths. The number of grizzlies and lynxes in the park is not known for certain, but the park’s biologists believed that in 2008 there were just over 300 grizzlies; a study started in 2001 hopes to determine the number of lynxes. Another study indicated that the wolverine, another very rare mammal in the lower 48 states, still lives in the park. Other mammals such as the mountain goat (the official symbol of the park), bighorn sheep, elk, mule deer, skunk, white tailed deer, bobcat, coyote, and puma are abundant or common. Unlike Yellowstone National Park, which implemented a wolf reintroduction program in the 1990s, wolves are believed to have recolonized Glacier National Park naturally in the 1980s. Sixty-two species of mammals have also been documented, including badger, river otter, porcupine, mink, marten, fisherman, two species of marmots, six species of bats and numerous other small mammals.
As for birds, 260 bird species have been recorded, with raptors such as the bald eagle, golden eagle, peregrine falcon, osprey and several species of hawks residing year round. The harlequin duck is a colorful species of waterfowl found in lakes and streams. The great blue heron, tundra swan, Canadian goose, and American wigeon are species of waterfowl most commonly found in the park. The great horned owl, Clark’s nutcracker, Steller’s jay, the pileated woodpecker and the cedar wax tree reside in the dense forests along the mountain sides, and at higher elevations, the ptarmigan, the woodline sparrow and the pink finch are the most likely to see. Clark’s nutcracker is less abundant than in years past due to the decrease in the number of white-barked pines.
Due to the colder climate, ectothermic reptiles are almost absent, with two species of garter snake and the western painted turtle being the only three reptile species that are proven to exist. Similarly, only six species of amphibians are documented, although these species exist in large numbers. After a forest fire in 2001, some roads in the park were temporarily closed the following year to allow thousands of western toads to migrate to other areas.
Finally the fish. A total of 23 fish species reside in the park’s waters and native game species found in the lakes and streams include the merciless west-side trout, northern pike, mountain whitefish, kokanee and grayling Arctic. Glaciers National Park is also home to the threatened bull trout, which is illegal to own and must be returned to the water if caught inadvertently. The introduction in previous decades of lake trout and other non-native fish species had a strong impact on some native fish populations, in particular the bull trout and the merciless trout of the west side.