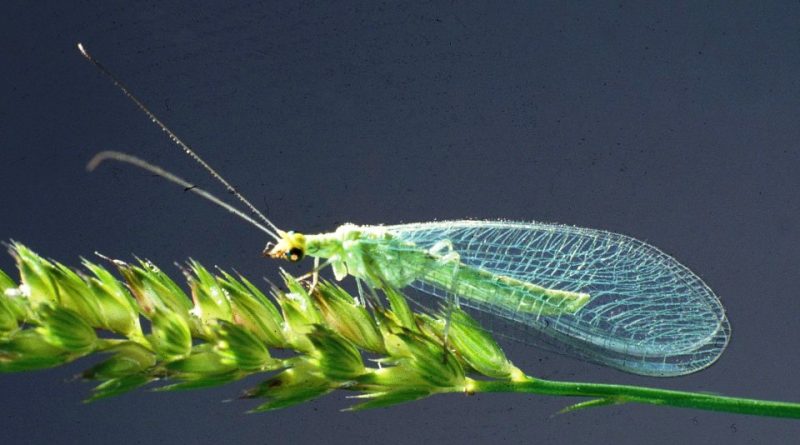 The Common green lacewing (Chrysoperla carnea Stephens, 1836) is an insect belonging to the Chrysopidae family.

Geographic Distribution and Habitat –
Chrysoperla carnea is an almost cosmopolitan species, also present in cold regions.
In Italy it is one of the most common Chrysopids and its most favorable natural is represented by the vegetation, spontaneous or not, infested by aphids, even if due to the polyphagous dietary regime, the chrysopus adapts easily also to the predation of other small phytophages, in particular other Rincoti and micro lepidoptera. In cultivation it adapts better to plantations that form a continuous vegetation along the row and tends to desert the species that have pubescent leaves and shoots.
Due to its characteristics as a predatory insect, it is also bred in various biofactories in America and Europe for use in biological control, mainly in protected crops, but it is also very common in nature in agroecosystems where there is no massive use of pesticides.

Morphology –
The adult of the Chrysoperla carnea is recognized by the body of medium size, slender and delicate, with an inconspicuous livery among the vegetation, also due to the presence of green-yellowish tones; the color is uniform light green, devoid of spots, with a dorsal yellow streak extending longitudinally over the whole thorax and abdomen. It has a hypognato head, with small, prominent, well-spaced and reddish-brown eyes; the antennae are filiform and elongating, about as long as the rest of the body; the mouthparts are chewing.
The thorax of this insect is slightly wider than the head and abdomen and has an elongated pronotum.
The legs are slender and the transparent and iridescent wings, richly branched; in rest they are folded over the abdomen. The wingspan is 2.5-3 cm.
The abdomen is cylindrical, clearly shorter than the wings.
The larva is campodeiform, elongated and fusiform, with gray-brown colors, provided with three slider legs. At the dorsal level it is crossed by a very thin brown streak and laterally by two series of tuberculous prominences, also brownish in color.
The larvae of the first age are just 1 mm long while those of the later ages are 7-8 mm to 10-15 mm long. The forceps, the pungent-sucking mouthparts are always evident.
The formation of pupae takes place inside a small white cocoon, built with the silk secreted by the Malpighian tubes of the larva. The pupae are mobile and have articulated jaws; at maturity these leave the cocoon and move to fix themselves on a support before flickering. The mobile pupa (farata phase) is in fact an intermediate form between the quiescent pupa and the adult insect; moreover, from the morphological point of view it is very similar to the adult, from which it differs for the absence of wings.
The egg is the typical one of Chrysopids, oblong in shape and supported by a thin peduncle. The eggs are laid isolated or in small groups of 2-3; these, initially, are greenish, but then turn to gray-brown. The biological function of the peduncle is to protect the egg from the action of natural antagonists, in particular ants.

Attitude and Life Cycle –
The biological cycle of Chrysoperla carnea is subject to climatic trends and latitude. In the warmer regions it carries out its cycle uninterrupted, while in the temperate regions it completes from 2 to 4 generations a year (2 in central and northern Europe, 3 in northern Italy, 4 in southern Italy and the islands).
The insect overwinters at the adult stage which enters diapause surviving for up to 9 months, but during the favorable season, a female has an average duration of two months.
In Italy, in open field conditions, the period of intense activity goes from the month of May to the month of September, while in the other months the predator’s activity is significantly reduced until it stops completely, even if the insect is present in the ‘environment.
It should be emphasized, however, that this insect also resists strong drops in temperature, close to zero, as long as they are limited to a few hours during the day, so it can also be used to combat Aphid infestations in spring, when the auxiliaries natural are not very active, and, in southern Italy, in a cold greenhouse during the winter.
In any case, predatory activity manifests its greatest intensity around 27 ° C.