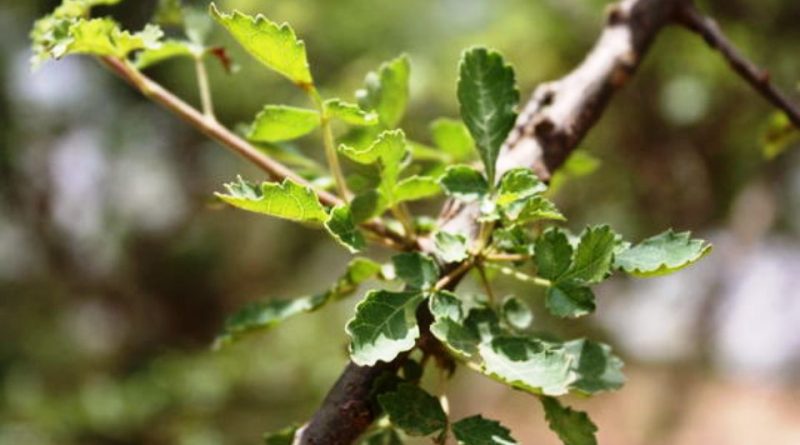 Etymology –
The term Commiphora comes from the Greek κόμμι cómmi rubber, resin and from φορέω phoréo bring: which produces resin.
The specific African epithet refers to its African origin, from Africa. 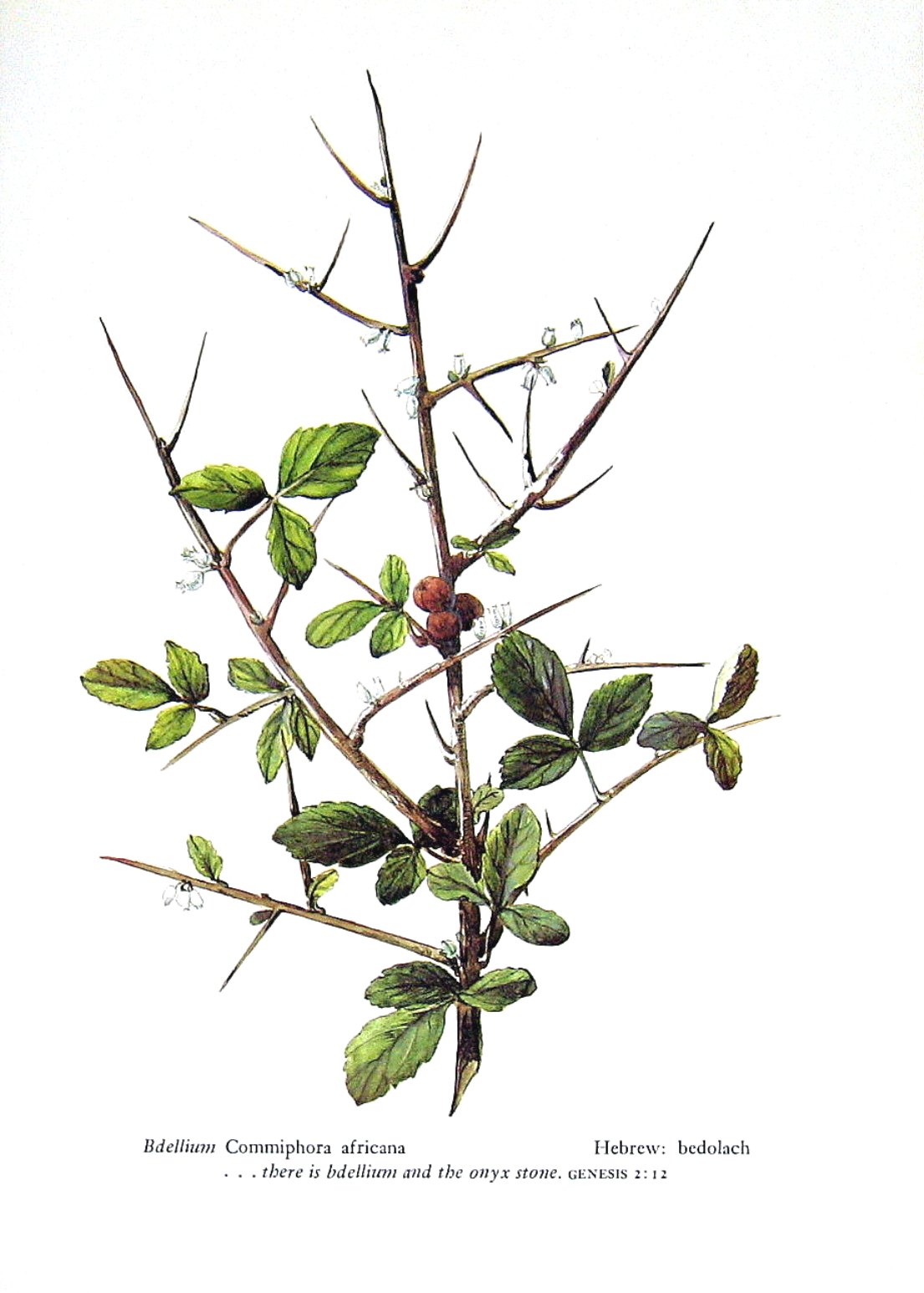 Description –
African Myrrh is a plant that comes in the form of a thorny deciduous shrub with low branching or a small tree with a short trunk and a dense and rounded crown. This plant usually grows 3 to 5 meters tall, with occasional specimens up to 10 meters.
The plant is often leafless for several months in the dry period and has a creeping root system that extends for several meters around the tree.
Its bark is gray-green in color, peeling to reveal a shiny, red if damaged surface from which exudes a clear, edible, aromatic gum.
The leaves are trifoliate with a large terminal leaflet and two small lateral leaflets, toothed and blunt and, like most Commifore, pleasantly aromatic when crushed.
Flowering occurs early in the dry season, usually before the leaves turn red. Flowering and fruiting are irregular and do not occur every year.
The fruits are reddish and about 6-8 mm in diameter, which divide when ripe to reveal a hard, black seed held by a pseudo-aril with four red fingers, resembling the clasps holding a jewel in a brooch or ring mount. The fruits of the tree are edible while the succulent and sweet roots are often chewed by humans, and the new leaves are sought after by camels and goats, particularly at the beginning of the dry season.

Cultivation –
Commiphora africana is a plant of the driest tropical and subtropical areas, which occurs naturally at altitudes below 800 meters, although occasionally found at altitudes up to 1,600 meters and more.
It grows best in areas where annual daytime temperatures are between 23 and 33 ° C but can tolerate 18 – 40 ° C.
It prefers an average annual rainfall between 400 and 800 mm, but tolerates 250 – 1,000 mm.
It grows well on a variety of soil types, preferring rocky sites, laterite crusts and sand. Although it is found on clay, it does not do well on vertisuoli. The plant, in fact, seems to grow best on calcareous soils, sands, red clays and sandy clays. It also prefers a pH between 6 and 7.5, tolerating 5.5 – 8. It should be noted that the plants by now rooted are very resistant to drought.
It is a fire resistant plant, regenerating well once the fire has passed.
As far as propagation is concerned, this plant can be multiplied by seed.
The seed has a hard coating that prevents water absorption, thus delaying germination. There are various methods of accelerating imbibition by surface treatment, such as abrasion of the seed coat or the use of sulfuric acid that may work, although this is not reported in the literature.
The seeds presumably can be stored for several years at room temperature but cold storage prolongs longevity.
The plant is however easily propagated also by cuttings. Large cuttings can be used to make a living fence.
This tree is extremely sensitive to atmospheric moisture and will produce its leaf buds at the first hint of moisture laden winds. As a result, it is the first tree to release leaves with the arrival of the rainy season, and remains remarkably green throughout the rainy season.

Customs and Traditions –
The vegetative characteristics of this plant mean that shepherds of the northern Sahel follow the pattern of the rains and the trees of C. africana as their leaves grow, continually finding new areas for their animals to graze. Furthermore, the plant is of extraordinary importance to many nomadic herders in the northern parts of the Sahel, who grow up in an otherwise poor environment and provide medicines, food and various other products for the local population.
This species is also the favorite food plant of the Diamphidia beetle, whose larva is used as a powerful poison for arrows.
C. africana is particularly suitable as a living hedge.
Parts of trees are used to treat a wide range of ailments: fruit for typhoid fever and stomach problems, bark for malaria, resin for seizures and to cover and disinfect wounds, and burnt resin as an insecticide and aphrodisiac.
Soft, termite-resistant wood is used for carving household tools, musical instruments, and general purpose items. An edible oil is also extracted and parts of the tree exhibit strong fungicidal properties.
The tender underground parts of young plants are juicy with a slightly sweet taste; these are dug up, peeled and chewed raw like cassava. They are mainly consumed by children and shepherds.
The gum obtained from the stem is eaten.
The bark is brewed to make a red tea and the leaves are cooked.
The fruits are used for the treatment of typhoid fever and as a remedy for stomach problems.
The fruits are chewed or pounded and used as a treatment for toothache and gum disease.
The powdered bark is mixed with porridge and taken as a cure for malaria.
The bark is chewed or pounded, then mixed with tobacco and applied to snake bites; In addition, the powdered bark is mixed with chalk and applied to scorpion stings and used as a treatment for leprosy.
A decoction of the roots is drunk as a remedy for fever, leprosy and stomach ache.
The resin is antiseptic. It is used to relieve headaches and disinfect wounds.
The stems are charred, mixed with shea butter (Vitellaria paradoxa) and used as a vulnerable ointment on wounds.
Among the other uses we remember that the African Commiphora, since it is a plant that propagates easily by cutting, even of rather large dimensions, is therefore particularly suitable to be used as live fences and hedges.

Preparation Method –
African myrrh is one of those plants of which everything is used and for multiple uses and not only for food and healing purposes.
The scented resin is burned in the rooms as incense, insect repellent, etc; it is used as a perfume in potions; stored in clothing to repel moths, etc.
The stems are used as toothbrushes to clean the teeth and maintain dental hygiene.
Bark is the source of a reddish-brown dye used to dye fabrics.
The seeds are used as pearls to make scented necklaces.
The wood is soft but resistant to termites and finds all-round use as utility construction lumber and for beehives, stools, household utensils and wagon wheels.
Wood is sometimes used as a fuel and to produce coal.
The bark and roots, as mentioned, are boiled and used as a steam bath in the treatment of fevers and colds.
The leaves and bark are used in the treatment of wounds, skin problems, male infertility, intestinal disorders, etc.