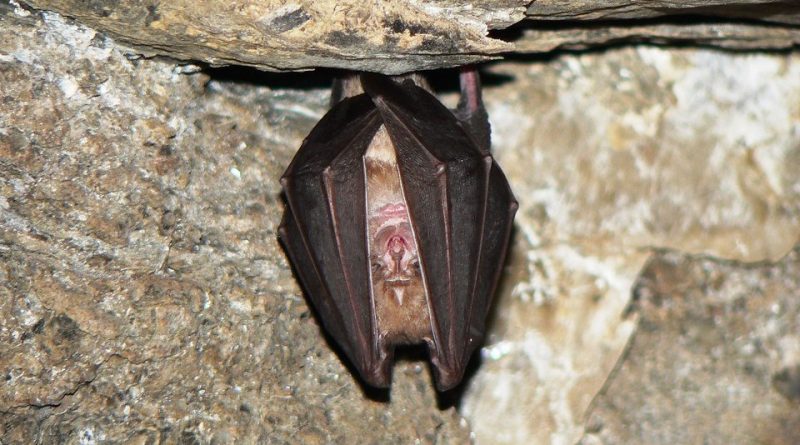 The greater horseshoe bat (Rhinolophus ferrumequinum Schreber, 1774) is a bat belonging to the Rhinolophidae family.

Geographic Distribution and Habitat –
The Greater horseshoe bat is a common chiropteran in the Palearctic Ecozone and is present from northern Europe and southern Great Britain to almost the entire Mediterranean Sub-region (major islands and Maltese included; Libya and Egypt excluded) and from this, through the Himalayan regions, up to China, Korea and Japan.
This species is also present in Italy throughout the territory.
Its habitat is that of deciduous temperate woodlands, pastures, mountain forests, Mediterranean woods and shrubs near ponds up to 3,000 meters above sea level but usually present no more than 800 meters. 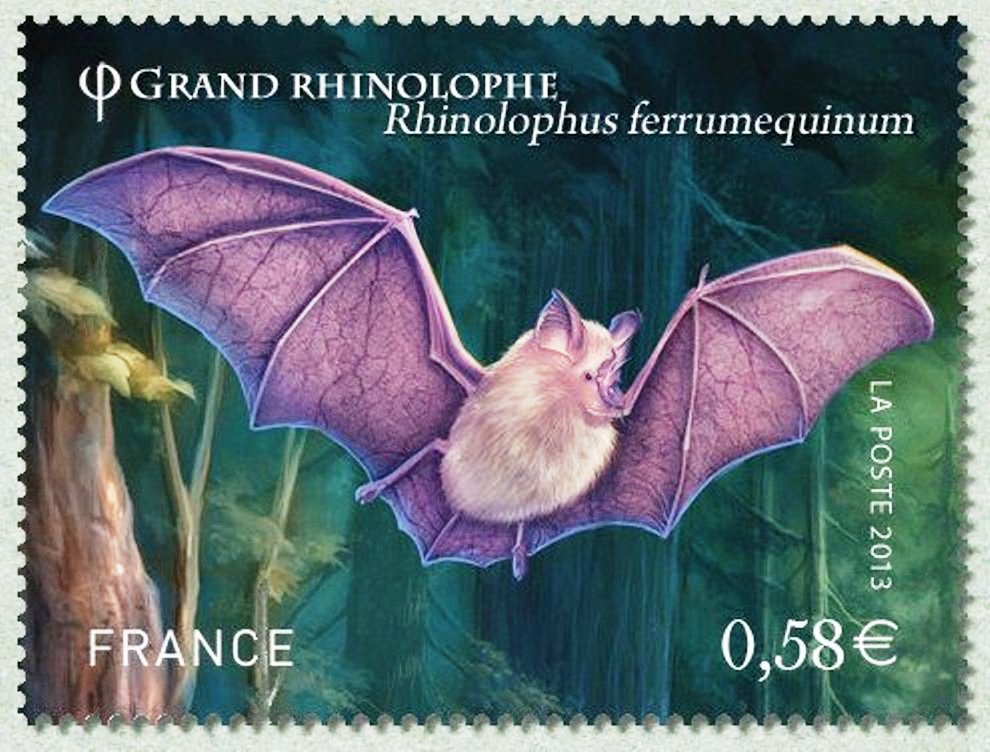 Description –
Rhinolophus ferrumequinum is a bat with a head-body length of 57-71mm, a tail length of 35-43mm, a wingspan of 35-40cm, foot length of 9.9-14mm, length of the ears of 20-28.5 mm, for a weight of 17-34 grams.
It is therefore a medium-sized bat with a long, soft and fluffy fur.
This bat has dorsal parts of a grayish-brown or brown color, more or less with reddish reflections and the base of the hairs clear, while the ventral parts vary from greyish-white to yellowish-white.
The ears are short and the nasal leaf has a triangular lancet, with the edges slightly towards the blunt tip, a rounded connective process, a small saddle, with slightly concave edges, the end rounded and curved forward. The anterior portion does not completely cover the muzzle and has little developed lateral leaves and a deep central hollow at the base.
The lower lip is characterized by one or three longitudinal grooves. The alar membranes are light brown or greyish brown, the first phalanx of the fourth finger is relatively long.
It has a long tail and is completely included in the large uropathy.
Furthermore, the first upper premolar is small and located outside the alveolar line.
It is recognized for its slow, floating, highly maneuvered flight carried out up to 6 meters above the ground.
This bat emits high duty cycle ultrasound with long duration pulses at a constant frequency of 77–83 kHz.

Biology –
Rhinolophus ferrumequinum gives birth one at a time between June and early August after a gestation of 72 days.
The mating period starts from the end of summer and lasts until the following spring.
The unborn babies will open their eyes after a week and are able to fly after about a month; the young become independent at two months of age.
Females reach sexual maturity at 3-4 years of life, while males not before the second year.
The maximum life expectancy of this bat is 30 years, making it the highest of all European bats.

Ecological Role –
The Greater horseshoe bat, in the summer period, takes refuge in rocky crevices, tree cavities and relatively hot and humid mining tunnels, in the attics of buildings in the northernmost part of the range and in ancient temples and ruins in the eastern part, where it forms to 1,000 females, with males tending to be solitary.
Arrived in the period from September to April, both sexes aggregate and hibernate within natural or artificial underground environments. This state can be interrupted several times, particularly to get food. Predatory activity begins at sunset.
These bats are sedentary and can make maximum displacements of up to 320 km, mainly between summer and winter sites.
Their diet consists of beetles, moths, spiders, grasshoppers and chrysopes caught in flight or collected on the ground above meadows and among trees up to 2–3 km from shelters. They are devoured on specific perches. Sometimes it can identify the prey even when stationary, scanning the surrounding space with ultrasounds, moving only the head.
According to the IUCN, from the ecological point of view, this species is mainly threatened by the loss of feeding environments due to the intensification of agriculture and the use of pesticides and, moreover, by the threat to underground sites such as for and also loss of summer shelters in buildings.
As far as conservation measures are concerned, it is a species listed in Appendix II, IV of the Habitats Directive (2/43 / EEC) and protected by the Bonn Convention (Eurobats). Included in numerous protected areas. Necessary protection of underground environments (regulation of access to the cave). Discourage tourist exploitation of the caves. Forest management especially in lowland areas. Fire management. Near Threatened by the European Mammal Assessment (Temple & Terry 2007).