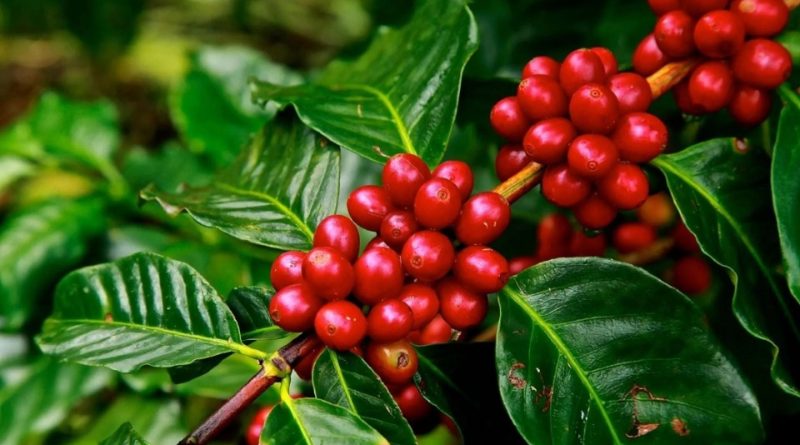 The coffee plant (Coffea arabica L., 1753) is a shrub species belonging to the Rubiaceae family.

Systematics –
From the systematic point of view it belongs to the Eukaryota Domain, Kingdom Plantae, Magnoliophyta Division, Magnoliopsida Class, Rubiales Order, Rubiaceae Family and therefore to the Coffea Genus and to the C. arabica Species.

Etymology –
The term Coffea comes from the Turkish qahvé coffee.
The specific Arabian epithet has been attributed for the geographic area from which it was believed to come, while it seems to originate from Ethiopia, being uncertain its spontaneous presence also in south-western Yemen.

Geographic Distribution and Habitat –
Coffea arabica is a plant native to Ethiopia, in the southwestern part of the country (region of the Oromo and Nilotics) or of Arabia (spontaneous presence in Yemen is also uncertain). Cultivation began in these regions, which then spread to tropical regions around the world.
Its optimal habitat is between the Tropic of Cancer and the Tropic of Capricorn, i.e. the tropical regions of Asia, Africa and America: these regions have in fact soils rich in humus, nitrogen and potassium, and ensure a temperature between 17 ° and 30 ° C and annual rainfall between 1,200 and 2,000 ml. 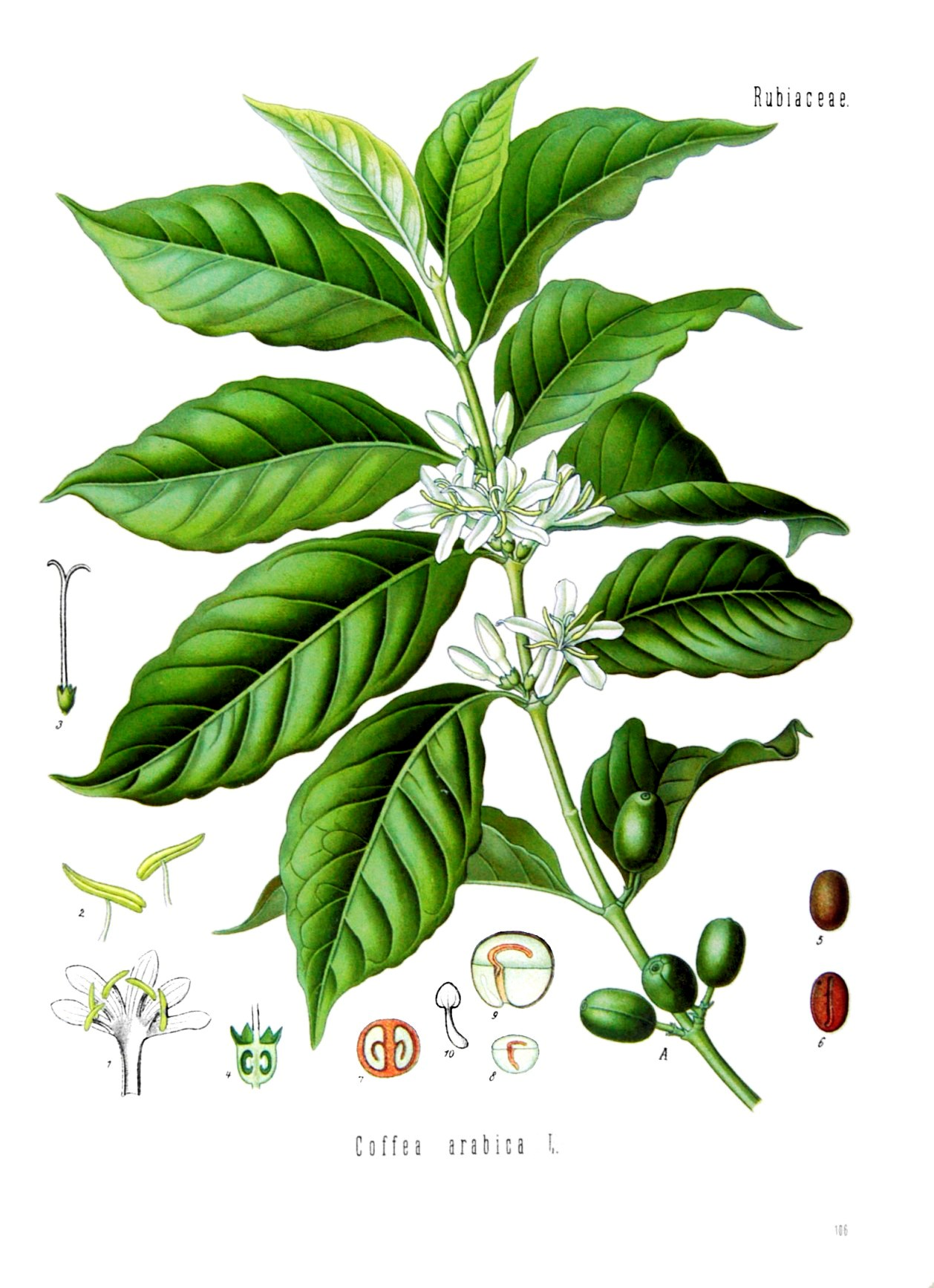 Description –
The coffee plant is a shrub or a small tree, up to about ten meters high.
The leaves, which are dark green in color, are 6-12 cm long, opposite, and oval or oblong in shape.
The flowers are white, gathered in bunches at the axil of the leaves, with a diameter of 10-15 mm.
The fruits are roundish or more commonly oblong drupes, which when ripe have a red or purple color and typically contain two seeds.

Cultivation –
For the cultivation of coffee, in addition to the optimal soil and climatic conditions, knowledge, as well as the technique, of an accurate harvest of the fruits of the plant is necessary. Characteristics such as soil composition, temperature, altitude and harvesting method are decisive.
The coffee plant propagates by sowing or by cutting, and before reaching full maturity to produce its fruits (called drupes or cherries, of which they have color and shape), about four years must pass.
This plant grows well in countries with a hot and humid climate, with temperatures between 18 and 22 degrees. The ideal would be not to exceed 20 degrees.
Today it is grown in about 90 countries and the main areas are located between the Tropic of Cancer and that of Capricorn. In the subtropical areas the plants are grown in open fields, while in the tropical ones the plants need shade and need to be protected from currents: they are in fact planted next to taller and larger plants such as banana and castor trees to ensure them plenty of shade.

Customs and Traditions –
Coffea arabica is a plant cultivated, similarly to other congenital species, for the production of the well-known drink.
Its seeds are used as a stimulant due to the presence of an alkaloid which is caffeine.
The caffeine content of the seeds of Coffea arabica is lower than that of other species of the genus Coffea commonly cultivated (in particular Coffea canephora) and is normally 12 per thousand on the dry part, with more or less fluctuations depending on the variety .
A drink is obtained from the Coffea arabica plant after grinding and treating its seeds.
The origin of its consumption is highly controversial. Certain botanists say that the first to recognize the stimulating effects of these drupes were the inhabitants of Ethiopia who chewed them raw. Some writings instead show that the beginning of the history of coffee would have its roots in a Middle Eastern drink called “Arabian wine” made from the fermented juice extracted from the ripe drupes of small trees.
Finally, other sources indicate its origin in a hot mixture called “qahwah” (exciting), prepared by nomadic peoples with biscuits made from sun-dried coffea seeds, coarsely ground and mixed with fat.
However, at the beginning the coffee drink was consumed mainly in the context of religious ceremonies or for therapeutic purposes, as evidenced by the texts of the Persian author Avicenna (11th century), who advised it in the treatment of kidney stones, gout, measles and cough.
We must reach the sixteenth century when coffee became a symbol of conviviality, reaching Egypt, Syria and Constantinople, where in the second half of the century the first public places for its preparation and consumption were opened. An important testimony on the subject came to us from the traveler Pietro Della Valle: “The Turks have another black drink, and the state is refreshing and the winter is the opposite; however it is always the same and it gets hot, who overcook, sucking it little by little, not at mealtime but without meal for pleasure and entertainment, when one is in conversation; nor will any gathering of them ever be made where one does not drink it, always being therefore prepared a good fire, with many porcelain bowls full of this stuff “.
Preceded by its reputation as a remedy to keep men awake, coffee arrived in Venice in 1615, from where it later spread to Europe.
The conquest of coffee on the markets, however, was not without obstacles and contradictions. The Muslim origins led the clergy to formally ask Pope Clement VIII to prohibit it. A story tells that the head of the church, famous for the reform of ecclesiastical customs, would have baptized it to make it into Christian grace and then sentenced: “it is so delicious that it would be a pity to let it drink exclusively to infidels”.
At the end of the 17th century the doctor and poet Francesco Redi, in the verses of Bacchus in Tuscany, heavily denigrates him:
“I’d drink the poison first
than a glass that was full
bitter and guilty coffee “.
Then, the same author, in a letter addressed to Monsignor Albizi, judges it very differently: “I confess that I sometimes drink it, if I have blamed it in the dithyramb, you know that I spoke there as a poet and not as a philosopher. I confess that I would never drink coffee by the glass, because gentlemen and civilians have the habit of taking coffee not a glass, but rather in a porcelain cup … You also observe that in the dithyramb I have blamed the bitter and guilty coffee and not the sweet and good coffee which is approved by me “.
However, it is necessary to arrive in the nineteenth century so that the drink, which has now become a small daily pleasure for a large part of the population, will have the right social recognition, also entering as an ingredient in sweet recipes.

Preparation Method –
Coffee, an inevitable ally of awakening, or a small ritual at the end of a meal, is an integral part of everyday life thanks to its versatility. Excellent as a drink and in the preparation of ice cream or creams, it can in fact reserve tasty surprises even as an ingredient in imaginative and refined savory combinations, in particular with white meats and fish.
But coffee can also be used in cooking in unusual and refined savory recipes.
Using coffee in savory recipes can give great satisfaction, especially when experimenting with new combinations, but for a good result it is good to keep in mind some simple rules.
For example, to facilitate the various stages of preparing dishes, it may be useful to grind the coffee powder, in order to make it thinner.
Another very important aspect concerns the harmonization between coffee and the foods to which it is combined: in general, for more structured flavors such as game or red meats, the ideal combination is represented by a coffee with a dark roast. , and therefore with a more intense flavor, while a light roasting is more suitable for fish and first courses.