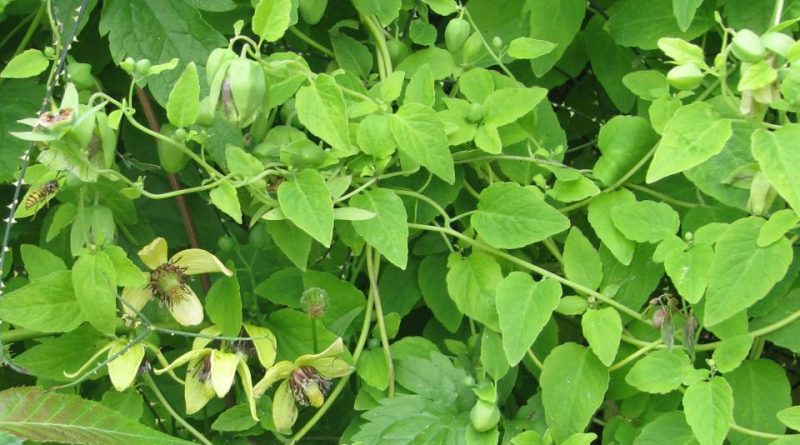 Etymology –
The term Codonopsis comes from the union of the two words codon, from the Greek κώδων códon campana, and opsis from the ancient Greek ὄψις ópsis, appearance, appearance.
The specific epithet pilo sula comes from the diminutive of pilosus: pelosino, hairy, not very hairy.

Geographic Distribution and Habitat –
Dang shen is a perennial plant native to Asia.
The plant is present in north-east Asia and Korea where it grows in dense shrubs, in the shade of trees on the edge of the forest, alluvial soils. 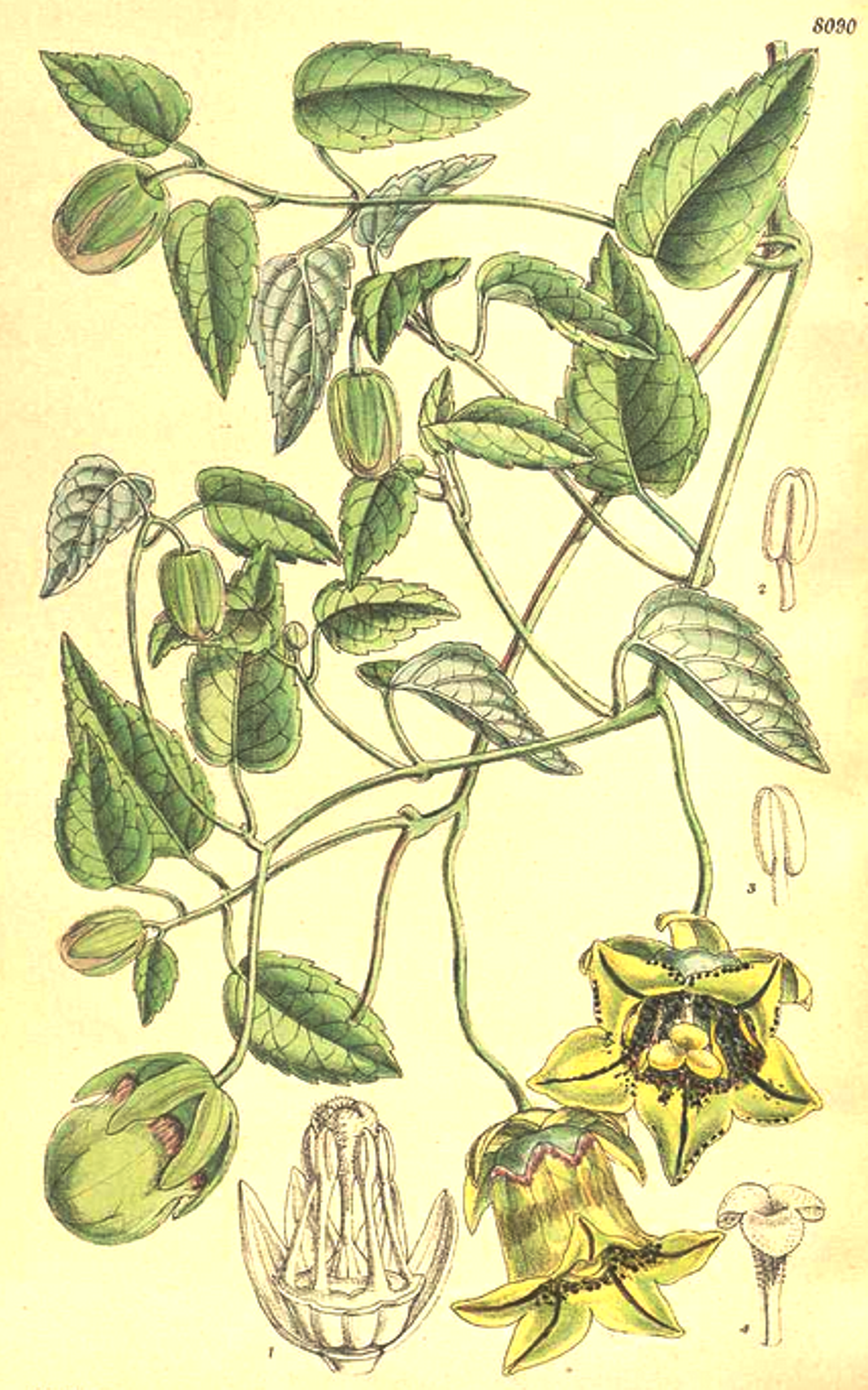 Description –
Codonopsis pilosula is recognized for the production of twin stems, up to 2 m long. From these branch lateral branches with leaves arranged alternately and small twigs with leaves arranged opposite.
The leaves are ovate in shape, up to 7.3 cm long and are usually covered with short hairs.
The flowers are solitary and are carried on the tips of the branches. These have a bell shape and are about 2 cm long; they are yellow-green with purple spots inside.
The fruits are capsules up to 2.4 cm long.

Cultivation –
Dang shen is a plant that can also be grown by sowing it outdoors in the period from March to April.
The optimal germination temperature ranges from 15-18 ° C and the germination time can range from a minimum of 7 to a maximum of -42 days.
It is a plant that adapts to vegetate in the most diverse conditions, but loves fertile and loamy soils, both in the sun and in partial shade. It is also suitable for forming groups or patches within mixed countryside borders or for forming not too large covers under trees or shrubs.
As for the nutritional supplies, it is advisable to fertilize moderately in spring with slow release organic fertilizer. To form showy spots it is advisable to plant them at least one plant every 40-50 cm and irrigate abundantly in the summer or in dry moments.
For its use it is harvested in autumn from spontaneous plants or from plants of at least three years old if cultivated. The roots, washed, are neatly tied with a string and partially dried in the sun. During drying, they are manually wrinkled or treated between two boards to hold the internal fabrics together. This treatment is used to compact the drug once dried to better preserve it.

Customs and Traditions –
The roots of this plant are used in traditional Chinese medicine. They have the shape of carrot or cylindrical (sometimes branched and up to 30 cm in length by 3 cm in width). These are a constituent of Radix Codonopsis, a blend used in herbal medicine.
The traditional medicinal use of dang shen has inspired medical studies studying the root’s abilities to treat cardiovascular, pulmonary and digestive conditions. Research on the effect of Condonopsis pilosula extract on gastric ulcers in rats has shown a reduction in gastric acid production and the severity of stress-induced ulcers.
The action of Codonopsis pilosula in supporting the energy tone of the person who takes it is more gradual than ginseng, but persistent over time.
Codonopsis pilosula is a very important plant in traditional Chinese herbal medicine. However, this discipline is based on its own method and on scientific assumptions different from those applied in modern times. Therefore, in order to understand the classical descriptions of Codonopsis pilosula it is necessary to have knowledge of the method and criteria adopted.
In this science, flavor is important in understanding the indications of a remedy. Therefore the ancient doctor proceeded to the preparation of the medicines, even after having tasted the starting substance. The taste of Codonopsis pilosula is sweet.
In Chinese medicine, Codonopsis pilosula plays a primary action on the functional spleen, pancreas and functional lung orbits.
The functional orbits as a whole are twelve. They are each attributed to an evolutionary phase according to the appropriate value convention. The functional orbit of the spleen and pancreas has a relationship with the earth evolutionary phase. The relationship with the functional lung orbit is instead attributable to the metal evolutionary phase.
The indications of the Chinese tradition are generally quite compliant with the knowledge of pharmacology, botany and phytotherapy. However, the cognitive method is different and allows for a greater understanding of the remedy. Furthermore, the information deriving from the study of the classics in relation to a remedy allows better correct integration with acupuncture treatments.
Regarding Codonopsis pilosula, the following indications are described:
– void of the functional lung orbit;
– lack of Qi;
– void of the functional orbit of the spleen and pancreas;
In traditional recipes in support of Qi, the remedy is often associated with astragalus.
As for the contraindications, tradition refers not to use Codonopsis pilosula in case of:
– hepatic yang beating up;
– calor humoris.
Codonopsis pilosula has also been studied according to modern techniques as well as traditional Cinse medicine.
Pharmacology to describe the action of a medicinal plant examines its individual chemical components. This procedure allows the precise attribution of a medicinal action. Furthermore, since many substances are already known, the analysis of the components allows a better understanding of the remedy. The remedy in recent decades has been subjected to chemical studies that have made it possible to identify its main components. This analysis allows us to better understand how the administration in therapy works.
Codonopsis pilosula contains: polysaccharides and sugars (inulin, starch, glucose, fructose), saponins (tangshenosides), amino acids, alkaloid (perlolirine), nitrogen compounds (choline, nicotinic acid), triterpenes (tarasseryl acetate, tarasserol, friedelina), sterols and their glycosides, atractylenolides, oroxiline, volatile oil and trace minerals.
Ginseng saponins have not been isolated from Codonopsis.
The use of this plant in modern pharmacology is giving many results and many studies are validating the following indications. Generally used as a substitute for ginseng due to its similar properties. The main ones should be considered:
– Stimulant of the central nervous system;
– Increased resistance;
– Physical and mental adaptogenic activity;
– Anti-inflammatory activity;
– Immunomodulating;
– Antidiabetic;
– Hepatoprotective especially in alcoholic steatosis;
– Antidiarrheal;
– Protective action against therapy radiation;
– Anti-asthenic;
– Anti-asthmatic.
As for contraindications, precaution is recommended in patients receiving therapy with aspirin, anticoagulants (warfarin, heparin), antiplatelet agents and non-steroidal anti-inflammatory drugs (ibuprofen, naproxen). In addition, caution should be exercised in concomitant use with laxative remedies or antacid or antireflux products.
It is also recommended not to use it during pregnancy and lactation due to lack of adequate studies. Also not recommended during fertility treatments. No studies regarding its safe use in children, therefore its use is not recommended. Possible interactions with plants concern laxatives and antacids, ginkgo biloba and dwarf palm.

Preparation Method –
Both the flowers, the roots and the whole plant are also used according to Chinese or traditional medical methodology.
There are some ready-made preparations of this plant on the market, especially in dry extracts in tablets or tablets.