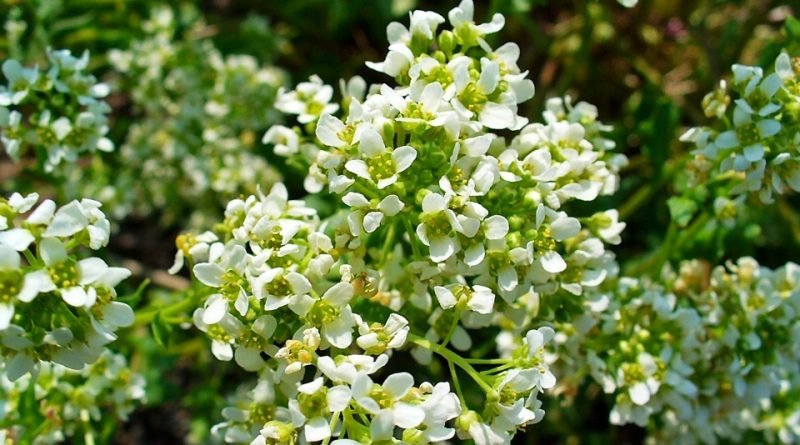 Systematics –
From the systematic point of view it belongs to the Eukaryota Domain, Kingdom Plantae, Magnoliophyta Division, Magnoliopsida Class, Capparales Order, Brassicaceae Family and therefore to the Cochlearia Genus and to the C. officinalis Species.
A subspecies of this species is known which is Cochlearia officinalis subsp. integrifolia (Hartm.) Nordal & Stabbetorp.

Etymology –
The term Cochlearia comes from cochlear, aris spoon: for the appearance of the siliquetta
The specific epithet officinalis comes from a medieval laboratory workshop: as a plant usable in pharmaceuticals, herbal medicine, liqueurs, perfumery and the like.

Geographic Distribution and Habitat –
Cochlearia officinalis is a plant native to the temperate environments of Europe.
Is situated:
– in Eastern Europe, in the Russian Federation (within the administrative center of Arkhangelsk, Komi, Murmansk and Nenets);
– in Central Europe, Belgium, Germany, the Netherlands and Switzerland;
– in Northern Europe, Iceland, Denmark, the Faroe Islands, Finland, Ireland, Norway, Sweden and the United Kingdom;
– in southwestern Europe, inside France.
It has also naturalized in other parts of Europe such as Italy and Spain.
Its habitat is that of the coastal and mountainous regions of Europe, including the Alps. In Ireland, it prefers brackish marshes, cliffs and coastal walls, and rocky and muddy beaches. In northern Scandinavia, it grows on pebble beaches, in crevices in beach cliffs, and in salt marshes. 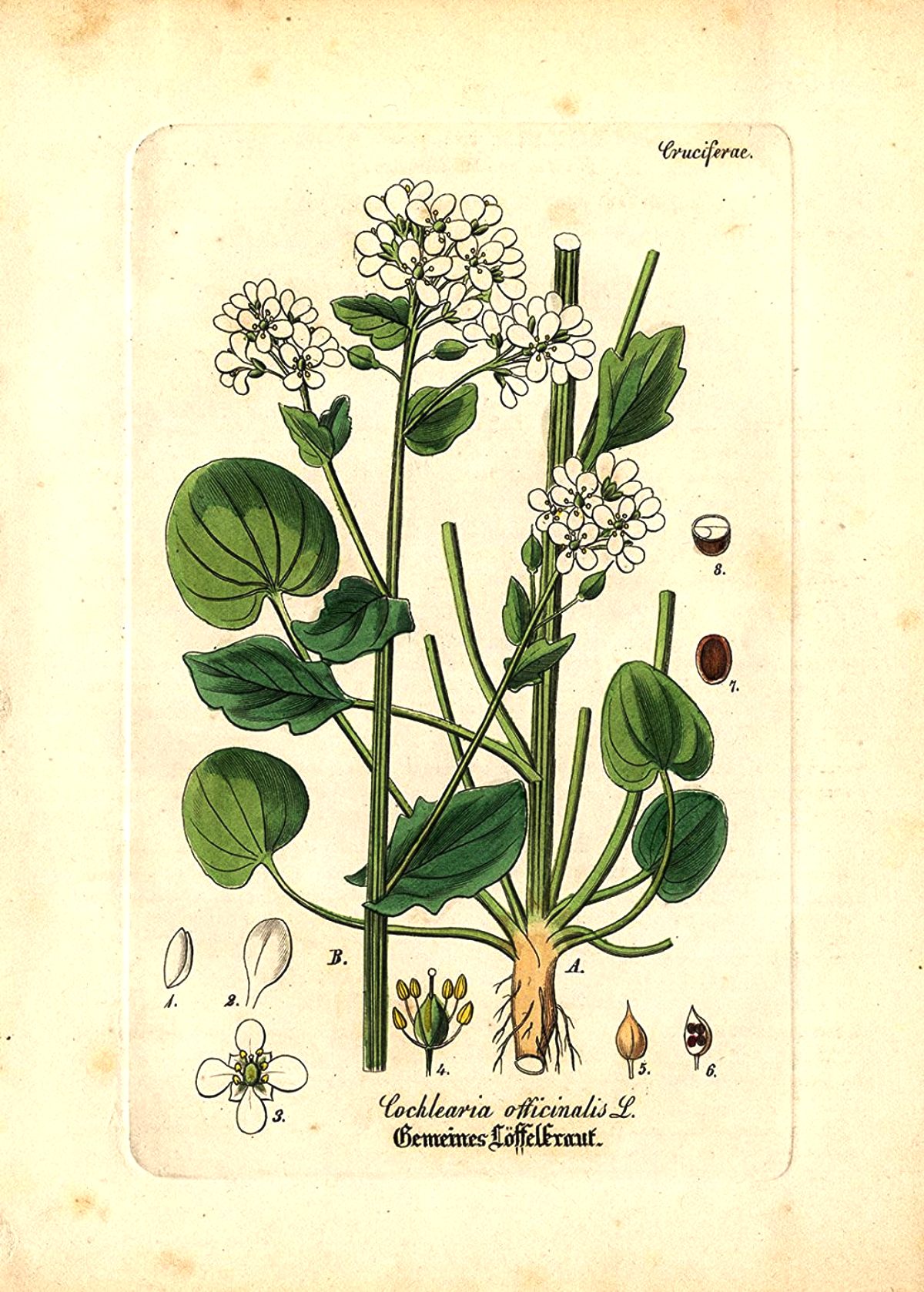 Description –
Cochlearia officinalis is a biennial – perennial herbaceous species that grows from 10 to 50 cm.
The stems are hairless and long peduncles with fleshy leaves.
The leaves are heart or kidney shaped, the leaves of the lower stems form a rosette around the base of the plant.
This plant blooms from May to August, producing small flowers that appear in white or lilac color, with four daisy petals.
The flowers are hermaphroditic and are pollinated by bees, flies and beetles. The plant is self-fertile.
The fruit is an ovoid-globose siliquet 3-5 (6.5) mm long, generally rounded at the apex and at the base, style of 0.3-0.6 mm. Semi subspherical-ellipsoid, 1.2-1.5 x 0.9-1.3 mm. brown or reddish-brown.
The seeds ripen from July to September.

Cultivation –
Common scurvygrass is a plant that grows wild in the coastal and mountainous regions of Europe, including the Alps while in Ireland, it prefers brackish marshes, cliffs and coastal walls and rocky and muddy beaches and in northern Scandinavia, beaches of gravel.

Customs and Traditions –
Cochlearia officinalis has a very bitter taste which in its traditional use was usually masked by herbs and spices.
It was once used in herbal medicine as a cure for scurvy as the plant contains vitamin C.
Nicholas Culpeper wrote in his book “Complete Herbal” that the main positive effect of this plant is when used “by those who have scurvy” and that “it is of singularly good effect to purify the blood, liver and spleen. , taking the juice in the spring every morning on an empty stomach in a cup of drink ”. In this plant there are:
– organic sulfur compounds: glucococlearin, glycoside, which by hydrolysis produces D-butyl isosulfocyanate (derived from secondary butyl alcohol); butyl (d-sec.) and isopropyl isosulfocyanates;
– essential oil 0,175-0,305% in the dry drug (3) with 94% of butyl isosulfocyanate (d-sec.);
– vitamin B1 502 g% in dried rhizomes and roots;
– vitamin C, 0.122-0.239% in the fresh drug, 0.75-1.82% in the dry drug.
The pharmacological action and therapeutic applications of Coclearia are similar to those of Horseradish. Gerhard, examining various sulphocyanates, found that those with low molecular weight are endowed with a hyperemising activity higher than those with higher molecular weight, when they are stored away from light and used after being dissolved in acetic ether. An exception would be the sulphocyanate contained in Nasturtium oil which shows a more energetic and longer lasting action than compounds with a lower molecular weight, such as isoamyl sulfocyanate and phenyl sulphocyanate.
The leaves have also been made into a beer called “scurvygrass ale” which has occasionally been remade as a craft beer.
Among the warnings it should be noted that excessive use can cause gastritis.

Preparation Method –
Since Cochlearia officinalis is supportive in cases of slow digestion or hypochlorhydria, that is difficulty or slowness in the production of hydrochloric acid by the stomach, it can be used for this purpose, taking care not to exceed as it can cause hyperacidity and irritate. the intestinal mucous membranes.
The plant also has a slight disinfectant power thanks to the presence and particular composition of its essential oil. It can be used topically through the applications of parts of the plant on the affected point. Or internally, through mouthwashes, obtained by pounding and letting the fresh plant macerate in cold water, and finally filtering before use.
Remember that vitamin C also participates in the antiseptic effect, which is thermolabile and hydrophilic. It then disappears when heated, but is extracted if macerated in water.
This plant, which is little exploited in commercial herbal medicine, due to its use in the fresh state, is still used in home remedies, if you live in the area where it grows and are experienced in recognizing it.
It is used to create mother tinctures for homeopathy; in this case it must be left to macerate for at least a week in alcohol in order to obtain an alcoholic tincture; a widely used variant is to leave it to macerate in white wine.
Cochlearia officinalis is also exploited by cosmetics; it becomes part of the composition of various creams and lotions, for the most varied applications: from stimulation to the growth of hair follicles, to scavenger creams – anti free radicals, to disinfectant gels.