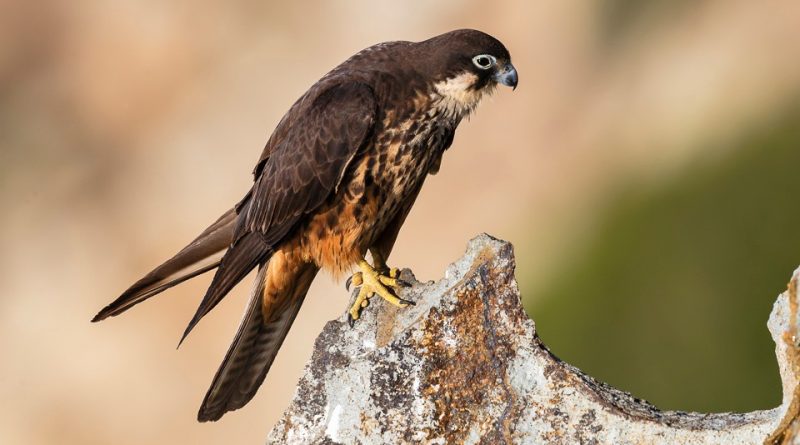 The Eleonora’s falcon (Falco eleonorae Gené, 1839) is a bird belonging to the Falconidae family.

Geographic Distribution and Habitat –
The Eleonora’s falcon is a migratory species that at the end of the autumn period makes a long trans-Saharan migration, mainly following coastal routes through the Suez Canal, the Red Sea and the Horn of Africa, to reach Madagascar and the Mascarene Islands. where it winters. The hawks that come from the westernmost areas of the Mediterranean (Balearic Islands and Sardinia) fly directly over the Sahara desert, making a journey of over 10,000 km.
This species nests, from spring to autumn, in the coastal areas of various islands of the Mediterranean basin, especially in Greece (where 80% of the entire population is found), but also in Spain (Balearic Islands), in the islands of Croatia, and in the coastal areas of Tunisia (Galite archipelago), Algeria and Morocco, going into the Atlantic as far as the Canary Islands.
In Madagascar, populations are concentrated in the north-eastern part of the island, in areas on the edge of the humid forest and in the cultivated areas close to it, forming mixed colonies with the other species of the sooty hawk (Falco concolor).
In Italy there are quite numerous colonies in Sardinia, in particular on the Island of San Pietro and in the Gulf of Orosei, and in Sicily, in particular in Lampedusa and in the Aeolian Islands.
As for the habitat, this species lives in colonies in the rocky environments of the Mediterranean islands. 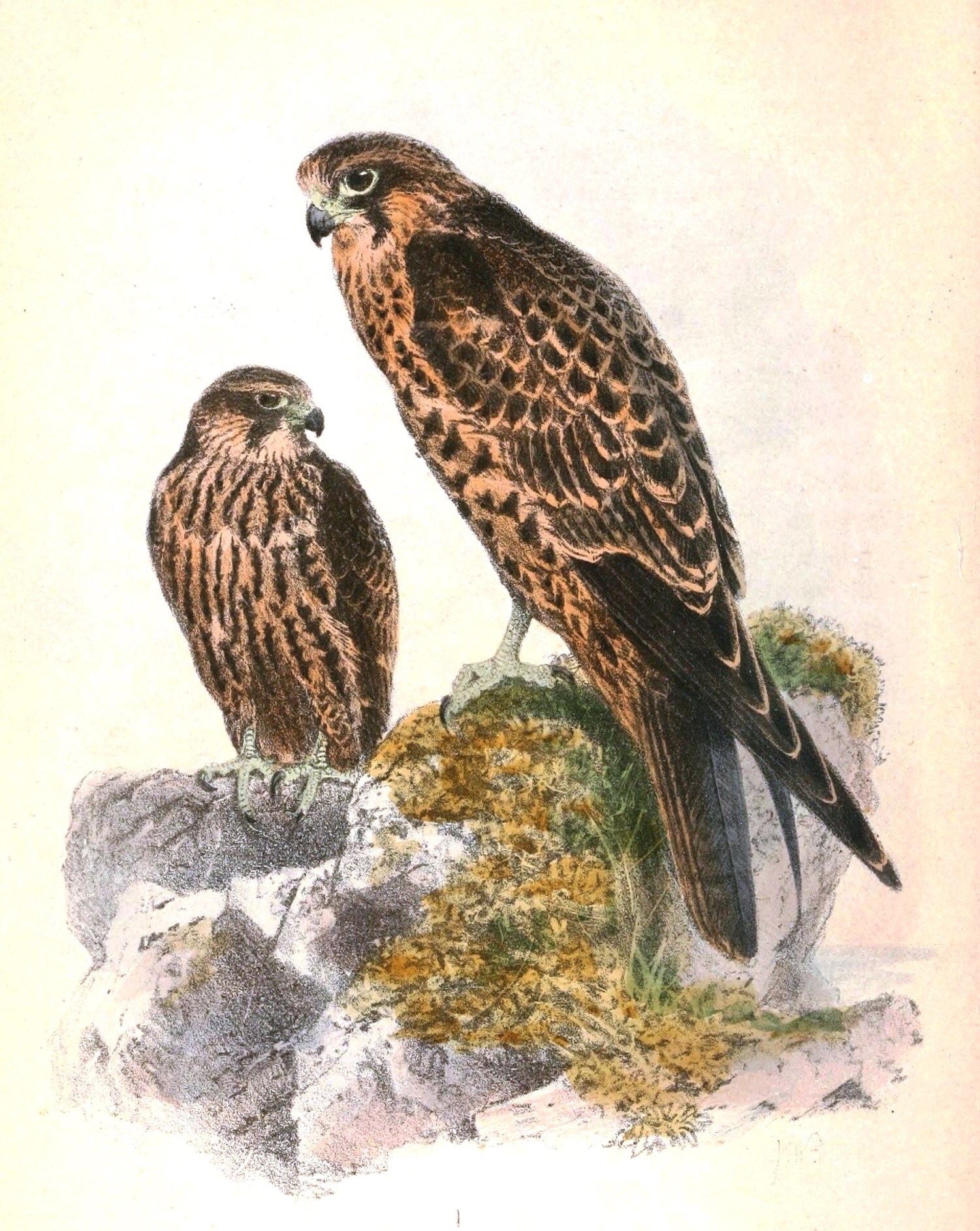 Description –
The Falco eleonorae is a medium-sized bird with a length of 36-42 cm and a wingspan of 87-104 cm and with a slight sexual dimorphism where the females are slightly larger than the males (average weight 335-460 g against 295-370 g) and have a slightly darker plumage. The plumage of the young is ocher and usually darkens after the first moult.
Both the male and the female have two different plumage colors: the “dark phase” is uniform blackish-brown, while in the “light phase” the throat and cheeks clearly stand out from the upper part of the head and the dark mustaches; the chest and belly have a background color from cream to reddish with brown-black streaks, while above it is brown or brown-bluish.
The wings are long and pointed, the body tapered and the tail rather long.
The voice is a characteristic kek-kek-kek.

Biology –
The Eleonora’s falcon is a long-range migratory species that nests in very numerous colonies, located on overhanging coastal cliffs and uninhabited islets. It re-enters the nesting sites at the beginning of spring, but the deposition of the eggs occurs only towards the end of July, that is considerably later than any other species in the northern hemisphere.
Colonies, if not disturbed, are usually reused for many years in a row.
The nest is made in natural cavities of the cliff without coating.
Each brood usually consists of 1-4 eggs. The breeding of the pullets usually lasts until September. In October-November the entire population migrates to wintering sites, that is, across the Mediterranean and the Red Sea, to south-eastern Africa and a large area of ​​the Indian Ocean (Madagascar and the Mascarene archipelago) where it winters.

Ecological Role –
The Eleonora’s falcon is a predator that, outside the nesting period, has a mainly insectivorous diet, feeding on large insects (orthoptera, in particular Pamphagids, beetles, odonates, lepidoptera and hymenoptera), which it captures in flight carrying them by the claws of the legs to the beak.
In the reproductive season, from the hatching of the eggs to the weaning of the chicks, the adults completely change their eating habits and feed almost exclusively on other birds, in particular on small passerines which, in late summer, migrate from Europe to Africa, passing through for the Mediterranean.
The hunting technique they adopt is very particular: these birds position themselves against the wind close to the cliffs, remaining motionless in the air without flapping their wings, arranging themselves at various distances from the cliff and at heights ranging from a few meters up to 1000 m; in this way they form a real hunting “wall”, where migrants run into, exhausted by the wind and by the journey they try to reach the coasts. Once the prey has been identified, they swoop towards it, grabbing it with their claws.
Currently, the global population has recently been estimated at between 13,000 and 14,000 breeding pairs.
According to the IUCN, the population of this species is, at the moment, of minimal concern even if the main threats are constituted by illegal killings, habitat destruction by anthropization of the coasts and anthropogenic disturbance.
Among the conservation measures, the Falco eleonorae is listed in Annex I of the Birds Directive (79/409 / EEC). At the Italian national level, the Eleonora’s falcon is included among the particularly protected species pursuant to law no. 157/92, art. 2, and in 2007 the National Action Plan was drawn up (Spina & Leonardi 2007).