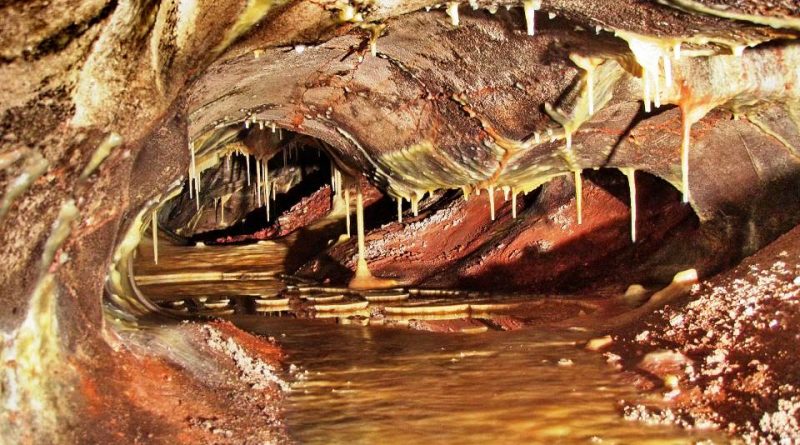 Wind Cave National Park, whose WDPA Code is: 4444408 is a national park located in South Dakota, United States of America.
This park has a land area of ​​136.97 km2 and was established on January 9, 1903.
Wind Cave National Park is located 10 miles north of the city of Hot Springs in Western South Dakota.
It was established in 1903 by President Theodore Roosevelt and was the seventh national park and the first cave to be designated a national park in the world. The cave is notable for its calcite formations known as boxwork, as well as its frostwork.
About 95% of the calcite formations discovered in the world are found in the Wind Cave. The cave is recognized as the densest cave system in the world, with the largest passage volume per cubic mile. Furthermore the Wind Cave is one of the longest caves in the world with 239.81 km of cave passages explored, as of 2018.
On the surface, the park includes the largest remaining natural mixed-grass prairie in the United States.
The passages in the park are said to “breathe” as air continuously enters or exits them, equalizing the cave’s atmospheric pressure and the outside air. When the air pressure is higher outside the cave than inside, the air flows into the cave, increasing the cave pressure to match the pressure outside. When the air pressure inside the cave is higher than outside, the air comes out of the cave, lowering the air pressure inside the cave.
Climate-wise, rapid weather changes, accompanied by rapid barometric changes, are a feature of the climate of West South Dakota. If a fast-moving storm was approaching the day the Bingham brothers, who found the cave, the atmospheric pressure would drop rapidly, causing the cave’s high-pressure air to rush out of all available openings, creating the wind for which it was called Wind Cave.
This cave was known to the Lakota, Cheyenne and other Native American tribes who traveled to the area, as well as early Euro-American settlers, but there is no evidence that anyone actually entered.
The Lakota (also known as the Sioux) spoke of a hole that blew air, a place they consider sacred as the place where they first emerged from the underworld where they had lived before the creator demiurge of the world.
The first documented discovery of the cave by white Americans was in 1881, when brothers Tom and Jesse Bingham heard the wind coming from a 25cm by 36cm hole in the ground. According to the story, when Tom looked into the hole, the “wind” (coming out of the cave air) blew his hat off his head.
From 1881 to 1889, few people ventured far into the Grotta del Vento. Then in 1889 the South Dakota Mining Company hired Jesse D. McDonald to oversee their mining claim on the cave site. The South Dakota Mining Company may have hoped to find valuable minerals, or it may have had the cave’s commercial development in mind from the start.
In fact, no valuable mineral deposits were found and the McDonald family began developing the cave for tourism.
In February 1892 the cave was already open to visitors; the standard tour rate was apparently $ 1.00, which was a considerable amount of money at the time.
Tourists explored the cave by candlelight during the guided tours. These early tours were physically demanding and sometimes involved crawling through narrow passages.
Wind Cave National Park protects a diverse ecosystem with eastern and western plant and animal species. 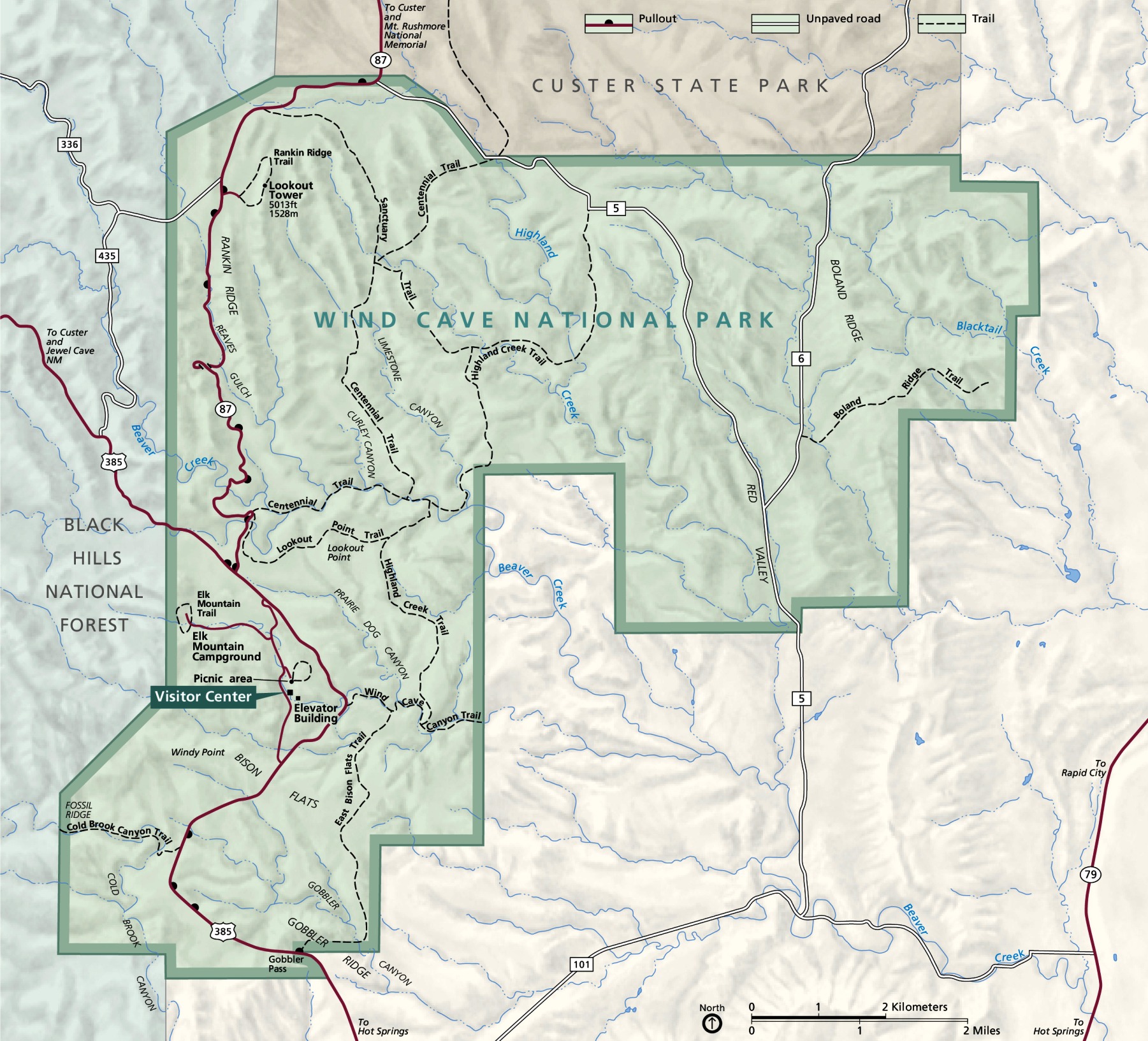 Flora –
Wind Cave National Park’s location on the southern edge of the Black Hills makes it a great place to experience both open grassland and ponderosa pine forest. The transition zone of these two habitats is called ecotone, an environment that provides cover and food for many species of animals.
The Great Plains are dominated by grasses, thanks to the semi-arid climate that the plains occupy. Herbs adapt well to the extreme environment of open plains. The Black Hills, which are higher than the surrounding lowlands, provide a cooler, wetter environment that makes woodland growth possible.
Wind Cave National Park occupies the southeastern edge of the Black Hills. It hosts both grasslands and forest environments. While much of the park is an open grassland with little woody vegetation, these ponderosa pine groves cover the topographically highest parts of the park.
The forests of the Black Hills are dominated by ponderosa pine. Ponderosa is common throughout much of western North America, and the Black Hills represent some of their more eastern ranges. Being a drought tolerant species, it is well adapted to life in the Black Hills, where rain can fall abundantly some years but be very absent in other years.
At Wind Cave National Park, steps are taken to ensure that ponderosa forests are naturally healthy. In recent years, the growing recognition of fire as a natural component of forest health has led to a prescribed fire program.
Fire promotes forest health by removing material. This material can be the accumulation of dead and decaying plant matter or sapling trees. By eliminating these materials, the fire makes more room for a diverse forest undergrowth. The forest undergrowth can consist of shrubs and flowering plants, such as the western snowberry. This supports a variety of animals in the forest.
Fire also provides habitat for animals by partially burning mature trees, creating “obstacles”. These standing dead trees attract insects such as long-horned beetles. Beetles become an important food source for birds, such as the northern flicker and black-hooded tit.
Another important ecosystem of the Park is represented by the grasslands.
The prairie ecosystem is like a puzzle. When parts of the puzzle disappear, it is difficult to understand the full picture. At Wind Cave, as many parts of this puzzle as possible are preserved. Consequently, this park is a haven for prairie plants and animals, and a great place to see a remnant of the North American prairies.
At one time, a third of the North American continent was covered by grasslands. Many explorers saw desolation when they arrived on the Great Plains, a feeling that still holds many travelers today. To the inexperienced eye, the prairie looks like a barren, lifeless desert. But the prairie is far from sterile. It is one of the most diverse environments in North American plant and animal life, and its unique life forms adapt well to the harsh climate of the inner continent.
The grassland is divided into eastern tall grass grassland, central mixed grass grassland and western short grass grassland. Tall grass grasslands receive 75 or more cm of rain per year, while short grass grasslands receive about 30 cm of rain. Mixed grass prairie receives rainfall in between these quantities. The composition of the species is determined by the climate, the frequency of fires and the degree and frequency of grazing. Mixed grass prairie is an ecotone that results in which species composition shifts constantly between tall and low grass grasslands.
To understand life on the prairie, it is necessary to understand the climatic extremes endured by the prairie inhabitants. Annual temperature fluctuations of 60 ° C are common. A few years can bring intense drought. Intense weather events such as hail, tornadoes and fires occur periodically.

In this environment, herbaceous species are able to maximize their growth and production, even in constantly changing environments. More than half of their mass is underground, in the form of roots. This helps build and retain soil and creates a food store that plants use during the winter or during drought. The grasses have also adapted to the grazing pressure. Silica, a hard mineral found in soil, is incorporated into the plant’s cells. This makes the leaves rough and less palatable for grazing animals.
Also, the growing parts are at the base of the plant, so grazing animals don’t kill the plant. When photosynthetic tissue is removed by grazing, the rate of photosynthesis within the unconsumed tissue increases.

Fauna –
The diversity of land cover in the park provides the primary habitat for many animals in the park. The point where the forest meets the prairie is called ecotone, the union of two habitat types. Animals are often seen along the ecotone, taking advantage of the covered forest and open grassland.
Moose are a great example of an animal that takes advantage of the ecotone. Generally, elk use the covered forest during the day and graze on the prairie at night.
The establishment of the Park Preservation Program in 1912 resulted in the reintroduction of bison, elk, and antilocapra into the park. That wildlife protection legacy continues today with the recent reintroduction of the black-footed ferret.
The wildlife that inhabits this park includes:
– raccoons, moose, bison, coyotes, skunks, badgers, stoats, black-footed ferrets, cougars, lynxes, red foxes, minks, antilocapra and prairie dogs. The Grotta del Vento herd of bison is one of only four free and genetically pure herds on public land in North America. The other three herds are the Yellowstone Park bison herd, the Henry Mountains bison herd in Utah, and on Elk Island in Alberta, Canada.
The bison herd of the Grotta del Vento is currently free from brucellosis.