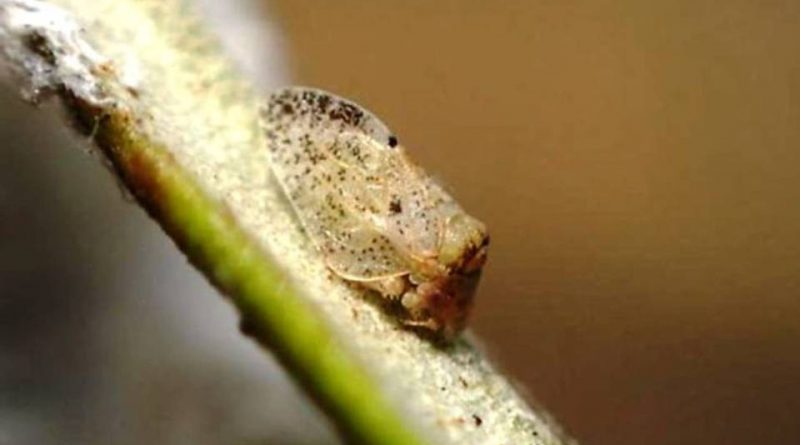 Geographic Distribution and Habitat –
The olive cotonello is an insect that lives in the distribution area of ​​the olive tree and causes considerable damage to olive groves in the Mediterranean Basin.
It is also a flexible species that adapts to various temperatures, even if the resistance or sensitivity to the same temperature varies with the individual. Euphyllura olivine has a high reproductive potential between 12 and 30 ° C, ovarian activity is inhibited at 32 ° C and oviposition ceases at 34-35 ° C.

Morphology –
The adult of this insect can be recognized by the 2-3 mm brownish-green body with a well-developed, hunched head; the head is bent forward and has a robust appearance, with the wings folded over the back.
It has powerful wings, with a characteristic rib. General light green color, with the front legs tending to light brown.
It is also equipped with a stinging-sucking mouth apparatus both in the nymph state and in the adult one.
The eggs have a more or less ellipsoidal shape, a little pointed on the front end, rounded on the other pole with a peduncle thanks to which it fixes on the vegetable, with dimensions of 0.35 x 0.14 mm and whitish color at the tip that gradually becomes yellow-orange.
The larvae, which undergo 4 larval moults, plus the imaginal moult, have a length that evolves from 0.4 to 1.5 mm and are covered with an abundant waxy filamentous secretion. The last two stages have wing openings.

Attitude and Life Cycle –
Euphyllura olivina overwinters as an adult, on the twigs and at the base of the foliar petioles or near the buds.
The adult insects, arrived in the spring period, resume their activity and the females lay the eggs by inserting the eggs, with their peduncle, in the buds, in the petioles of the leaves and in the flowered racemes. From these eggs, after about 15 days, the nymphs are born which soon become covered with abundant waxy secretion which protects them; the nymphs lead a gregarious life.
The development of the 1st generation is completed in about a month.
This generation is followed by a second one that can damage, even severely, the flowers and fruit just attached.
Finally, this generation is followed by others that normally do not cause significant damage.
In this way, depending on the climatic characteristics, the species can make 5-6 generations per year, especially in the most favorable climates.
Euphyllura olivina is particularly harmful when it is at the nymph stage and attacks young branches and little fingers. It feeds on the lymph through the stylet inserted in the rostrum, altering the normal development of the organs, inducing the sterility of the flowers and the drop of the same and of the fruits. The nymphs secrete a mass similar to cotton and honeydew that favors the establishment of the ectoparasitic fungus Capnodium oleaginum, which alters the photosynthesis of the affected plant and decreases its production. The economic damage threshold is around 2.5-3 nymphs per 100 little fingers.
The greatest attacks occur in the moments of flowering and fruit set.

Ecological Role –
The fight against Euphyllura olivina until recently was a chemical one; however its use should be only occasionally and in case of strong infestations and it was directed to the nymphs of the 1st, and possibly, of the 2nd generation.
The chemical intervention, as is known, however, triggers negative effects on the biocoenosis and eco-systemic balances, which is why the path to be taken is of a low environmental and agro-logical impact.
It is good practice to carry out agronomic practices (pruning) which tend to thin out the foliage; in fact, particularly dense foliage that maintains a certain humidity favor the establishment of the phytophagous.
Furthermore, in nature, the phytophagous is effectively controlled by some entomophages, among which we remember:
– Chrysopid neuropterans, predators;
– Larvae of Diptera Hoverflies, predators;
– Rincoti Anthocoridae including Anthocoris nemoralis;
– Encyrtus euphyllurae, Hymenoptera Parasitoid Encirtide, together with other parasitoid Hymenoptera.
Furthermore, some olive varieties are more resistant than others.
With a view to the use of pesticides with low environmental impact and in the search for solutions that respect the equilibrium in ecosystems, the effectiveness of a preparation based on hydroxytyrosol coming from vegetation waters was evaluated on insect infestations. The preparation was extracted from fresh vegetation waters, using a hydrolysis and post-hydrolysis purification process.
The effectiveness of the treatment could also be due to the absence of toxicity towards parasitoids and natural predators that control the insect.
In integrated pest management, deltamethrin, a pyrethroid insecticide that acts on insects by contact and ingestion, can be used.
The olive cotonello, once counted among the secondary insects in the olive grove, appears more and more frequent in the areas of southern Italy, often associated with climatic events and varietal susceptibility.