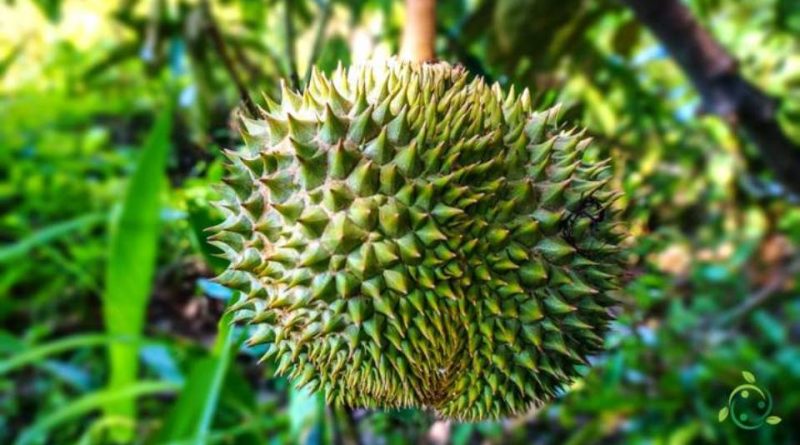 Durian (Durio zibethinus L., 1774) is an arboreal species of the Malvaceae family. In fact, there are over 30 recognized durian species, of which at least nine produce edible fruit.
Over 300 varieties have been named in Thailand alone, 102 in Indonesia and 100 in Malaysia. In fact, however, only the Durio zibethinus species is the only one available on the international market, while the other species are sold only in local markets.
The pulp of the fruit can be eaten at various stages of ripeness and is used to accompany a wide variety of foods, both savory and sweet. Furthermore, the seeds can be consumed after roasting.
As far as multiplication techniques are concerned, Durian can be propagated by seed or by grafted cuttings. The seeds must be planted fresh, as they quickly lose germination by drying out.
These germinate after about a week and are fast growing. Grafted trees begin to bear fruit after 4-5 years, while seed plants take 15 years.
Currently, however, propagation for industrial plants takes place by grafting, since good rooting is not possible through cutting and layering. The free rootstocks are obtained from seedlings of at least one year old, but they are sensitive to root rot. This is the reason why other species are used as rootstocks; among these we remember: Durio malaccensis, Durio mansoni, Durio lowianus and Cullenia excelsa.
Once grown, durain trees take on a considerable size, so the planting distances must be at least 14 square meters, with a density corresponding to about 50 plants / Ha.
The durian crops must be equipped with an emergency irrigation system and it is necessary to carry out work on the soil near the plants in order to limit the weeds.

Furthermore, the tree must be protected from the wind and from too high light intensity.
From the climatic point of view, for its cultivation, durian requires a tropical climate with abundant rainfall distributed throughout the year. It also prefers fertile and deep soils, rich in organic matter and with a pH of 6-7. It benefits from fertilizations, and irrigation for drier periods.
The durian fruit reaches full maturity when it falls to the ground and the suture lines of the peel are barely visible, which is opened with a knife.
Durian blooms (in Puerto Rico) in the period of April-May and the fruits are ripe in August-September. The average yield for each mature tree is about 50 fruits per year; each fruit weighing from 1.5 to 4 Kg.
The large fruits are characterized by a repellent scent but an excellent taste (sweet and spicy, like vanilla ice cream with hints of spice and banana).
The seeds are edible after being boiled, fried or roasted. Leaves, fruits and roots also have healing properties (antifebrile, against jaundice and for the treatment of skin diseases).
The harvesting technique can be carried out by waiting for the fruit to fully ripen by falling to the ground, otherwise it is collected from the tree and left to mature in special rooms. In the latter case, the right moment of harvesting is identified by the sound emitted by the fruit by lightly beating a metal blade on it.
In southern Thailand, durian is harvested earlier as consumers require crunchy and not very aromatic fruits to be used as a vegetable, while in the north fully ripe fruit is preferred.