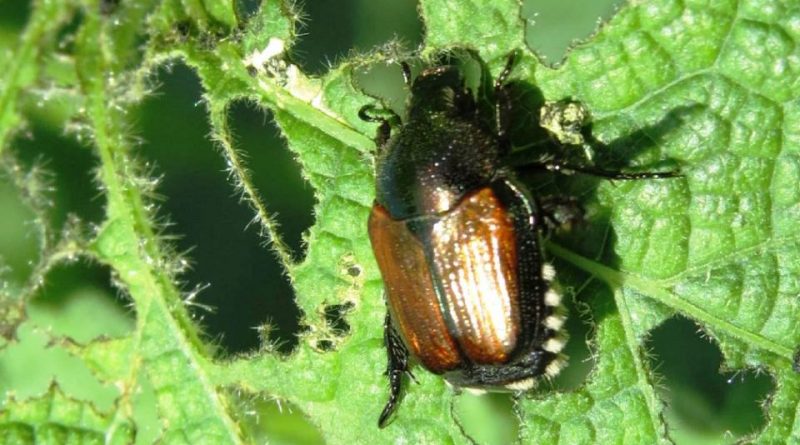 Geographic Distribution and Habitat –
The Japanese beetle is an insect native to an area of ​​Japan that includes the regions of Hokkaidō, Honshū, Shikoku and Kyūshū.
Later it spread far beyond the Japanese borders and is now present in north-western Italy, China, Russia (Kuril Islands), Portugal (Azores), Canada (region of Québec south of Montréal, south-eastern part of the province of ‘Ontario, along the banks of the St. Lawrence River, southwestern part of the same province, in the area bordering Lakes Huron, St. Clair and Erie) and the United States.
Its introduction in the United States seems to have occurred through larvae contained in the bulbs of iris plants.
In this country its first appearance is in 1916, in Riverton, in the state of New Jersey. In 1918, the United States Department of Agriculture (USDA) and the authorities of the state of New Jersey attempted to combat this species, but the infestation was now so advanced that the techniques then available were ineffective.
By 1932, the Japanese beetle had spread westward to many other states east of the Mississippi River (except Florida) and to Wisconsin, Minnesota, Iowa, Missouri, Nebraska, Kansas, Arkansas, and Oklahoma.
As early as 1967, the beetle was present in 19 states with large or severe infestations and in 4 others with limited or isolated infestations.
This diffusion was due to the presence of a favorable climate, the wide availability of host plants, the lack of natural enemies and the expansion of the areas covered with lawn, which constitute the ideal breeding environment for this species.
In Europe it was found for the first time in the summer of 2014, in Italy, near the Ticino river on both banks (in Lombardy and Piedmont), and the infested area has progressively expanded. In 2017 it was found in Italian Switzerland.
Popillia japonica is a polyphagous species that infests and destroys lawns, wild, fruit and ornamental plants and is spreading.
In the United States it is reported on about 300 plant species and is considered harmful on over 100 plants, both spontaneous and cultivated, including fruit trees (pome fruit, stone fruit), grapevine, hazel, small fruits, forest essences (lime, black walnut, maple , beech, birch, alder), open field crops (corn, soy, alfalfa), vegetables (eg tomato, bean, asparagus, courgette) and ornamental crops (eg rose, dahlia).

Morphology –
The Japanese beetle is recognized in the adult state as it has an oval shape, with a length of 8 – 11 mm and a width of 5 – 7 mm. The body and the pronotum have a bright, metallic green color, with bronze or copper colored elytra that do not completely cover the abdomen, which underneath has white-greyish bands of hair (called setae), visible also by observing animals sideways.
It has 5 patches of white hairs on each side of the abdomen and a couple of the same on the last abdominal segment that allows it to be distinguished from all other similar-looking beetles.
It has a sexual dimorphism with the males generally slightly smaller than the females; when they are laid, they keep the second pair of legs extended and have pointed tibial spurs, while in the female they are rounded.
In both sexes, the antennae are frequently folded and hidden, but when insects perceive an interesting smell or pheromones, structures similar to small petals of a flower open on them, which are called lamellae.
The newly laid eggs can be spherical, ellipsoidal or slightly cylindrical and, as a rule, have a diameter of around 1.5 mm. Their color varies from transparent to creamy white, with small hexagonal areas visible on the surface. During the development of the embryo the egg increases in size until it doubles in volume and takes on an almost spherical shape.
The larvae have a transparent – creamy white consistency and their bodies are sprinkled with long brown hair mixed with shorter spines and blunt tips. Their head is yellowish-brown in color with dark mandibles. The body is made up of 3 thoracic and 10 abdominal segments. Each thoracic segment carries a pair of segmented legs. The accumulation of fecal matter within the terminal part of the intestine (proctodeus) can give the posterior end of the abdomen a dark grayish color.
In the resting phase, the larvae take on a C-folded shape, as for other Scarabaeidiae.
After the last larval stage there is the transformation into a pupa which takes place inside a cell composed of earth that is built by the last larval stage. The pupa is about 14mm long and 7mm wide, with a color ranging from pale creamy yellow to metallic green, depending on its age.

Attitude and Life Cycle –
The Japanese beetle has a life cycle that occurs in one year, except in cold areas where it can complete the cycle in 2 years.
The appearance of adults, the period of oviposition and the duration of the subsequent development vary with latitude, with altitude and with fluctuations even from year to year. Adults emerge in May in the warmer climate regions and in June – early July in the northernmost portions of the range.
The males appear a few days before the females but the relationship between the sexes is always maintained in parity.
Mating begins soon after adult appearance, when virgin females release potent sex pheromones that immediately attract large numbers of males. At this point the males come in mass and aggregate around the receptive females forming groups that are called balls, even if in this condition the mating is difficult.
Popillia japonica chooses the oviposition site according to the distance from the host plants of the larvae and the conditions of the soil cover. In suburban areas, where lawns are abundant and most adult beetles feed on trees, bushes and vineyards, eggs are deposited in nearby herbaceous plants and even if they lay most of their eggs in pastures, meadows or golf courses, some of them can be placed in the cultivated fields. In particular, during the dry summers, when the pastures are hard and dry, the beetles usually look for fields both uncultivated and cultivated with moist and soft soil.
The moment of deposition takes place with the female digging into the ground up to a depth of 5-10 cm and depositing 1 to 3 eggs individually; after which it emerges again from the ground after a day or sometimes after 3 or 4 days and starts feeding and mating again.
A female can enter the ground more than 16 times during her life and lay 40 to 60 eggs.
The hatching period of the eggs takes 10-14 days.
The first larval stage feeds for 2-3 weeks on the rootlets it finds in the vicinity of the hatching site, then makes the first moult.
The second stage continues to feed for another 3-4 weeks and then sheds. Most larvae reach their third larval stage near autumn, when the soil temperature gradually decreases. The activity of the larvae stops when the temperature reaches around 10 ° C and most of them overwinter as a third stage at a depth of 5–15 cm. With the beginning of spring the larvae return to the roots of the plants to start eating again and after 4-6 weeks they are ready to turn into pupae. This process occurs close to the soil surface and lasts from one to 3 weeks. The adult stage emerges from the ground starting from mid-May, in warmer climate areas, and in June-July in colder regions.
The average life span of Popillia japonica is influenced by the predominant temperature in the living environments: it is relatively short in hot regimes and relatively long in cold regimes with variations ranging from 9 to 74 days in males and from 17 to 105 days in females.
The adults of this beetle perform more or less intense erosions on the leaves (the veins are generally spared), the flowers and also the fruits. Due to a marked gregarious behavior it is possible to find tens or hundreds of insects on a single plant or on a group of neighboring plants intent on feeding, causing serious damage in a very short time, while other plants of the same species at a short distance are unharmed. On the other hand, the larvae, feeding at the expense of the roots, preferably grasses, in the presence of high infestations are particularly harmful to lawns (eg golf courses, gardens) and meadows and pastures, both due to the appearance of extensive areas of vegetation and they turn yellow and then dry up, both due to the damage caused by the excavations of moles and birds that feed at the expense of the larvae in the soil.

Ecological Role –
Popillia japonica is not a problem in Japan as the natural enemies of the species keep its populations in check.
Introduced instead, as mentioned, accidentally in the United States around 1911, it proved to be particularly harmful on a large number of cultivated and spontaneous plants, for which in the phytosanitary legislation it is included among the quarantine organisms (Directive 2000/29 / EEC and smi ) whose introduction and dissemination within the European Union must be prohibited.
The interventions to combat this beetle must be implemented with traps that contain a double attractant consisting of a food bait and a specific pheromone.
Intervention with synthetic products against adults can be a solution only if you work in specific contexts such as a specific crop or a nursery; vice versa, especially if you are in natural environments, such as woods, the use of insecticides is impractical both for legislative constraints and for the extension that these areas normally have. Please note that pursuant to art. 17 of the L.R. n. 20 of 03/08/1998 treatments with phytosanitary products (insecticides, herbicides and fungicides) harmful to bees on tree, herbaceous, ornamental and spontaneous crops during the flowering period are prohibited.
As for the microbiological fight, the experience made in the United States between 1920-1933 is reported; period in which 49 species of natural enemies were launched.
Of these, only a few, such as Tiphia vernalis and Istocheta aldrichi, have settled and none have proven to be able to exert a highly effective control action on the beetle. Also in the United States the use of numerous microbiological agents has been tested against the larvae, including the bacteria Paenibacillus popilliae and P. lentimorbus (agents of the disease called milky disease as the infected larvae take on a milky color) and a recent isolate of Bacillus thuringiensis var. japonensis. In addition, the action of fungi (Metarhizium anisopliae, M. robertsii, Beauveria bassiana) and nematodes (Steinernema glaseri, S. kushidai, Heterorhabditis bacteriophora) was also evaluated.
Unfortunately, the use of all these biological agents has found great limits in practice due to the production of effective formulations, the particular distribution conditions (they require high levels of moisture in the soil) and the high costs for the treatment of large surfaces.
It is therefore believed that the containment against Popillia japonica should be further subjected to study phases in which agroeocological techniques are put into practice with the creation of more efficient associations, diversification of plant species, with increase in biodiversity, presence of hedges separating the various fields, different soil tillage techniques, etc.