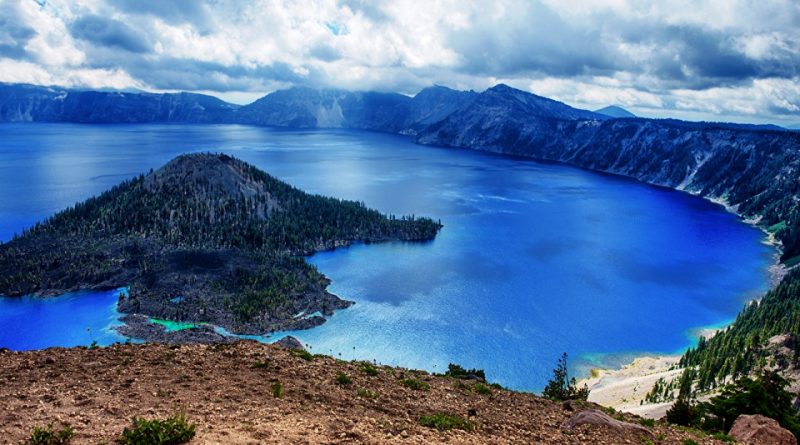 Crater Lake National Park, identified by WDPA Code 555566960, is a US protected natural area located in the State of Oregon.
Crater Lake National Park takes its name from Crater Lake, located in a caldera formed by the explosion of Mount Mazama.
The Park, whose surface area is 781.17 km², was established on May 22, 1902.
Most of Mount Mazama collapsed following a major eruption about 7,700 years ago. The volcano is located in Klamath County, 97km north of the Oregon-California border. Its collapse formed a caldera that contains Crater Lake.
The mountain is located in the Crater Lake National Park.
Mount Mazama originally had a height of 3,700 m, but following its eruption this was reduced to 2,486 m.
Crater Lake is 592m deep, the deepest freshwater body in the United States and the second deepest in North America after Great Slave Lake in Canada. The exact water level actually changes from year to year as the volume of water is subject to variations due to snowfall and evaporation; in historical times the maximum level was reached in 1975 at 1883 meters above sea level. while the lowest was in 1942 when the surface reached 1870 meters above sea level. The average level is about 1881 m a.s.l.
Moreover, given the snowy origin of the water, the lake is one of the clearest in the world. Crater Lake has a diameter of about 8 km and an area of ​​about 53.40 km² and its shores are surrounded by rock walls that reach 600 meters above the surface.
Inside the lake there is a small volcanic islet, the Wizard Island, which reaches a maximum height of 230 meters above the surface of the lake. 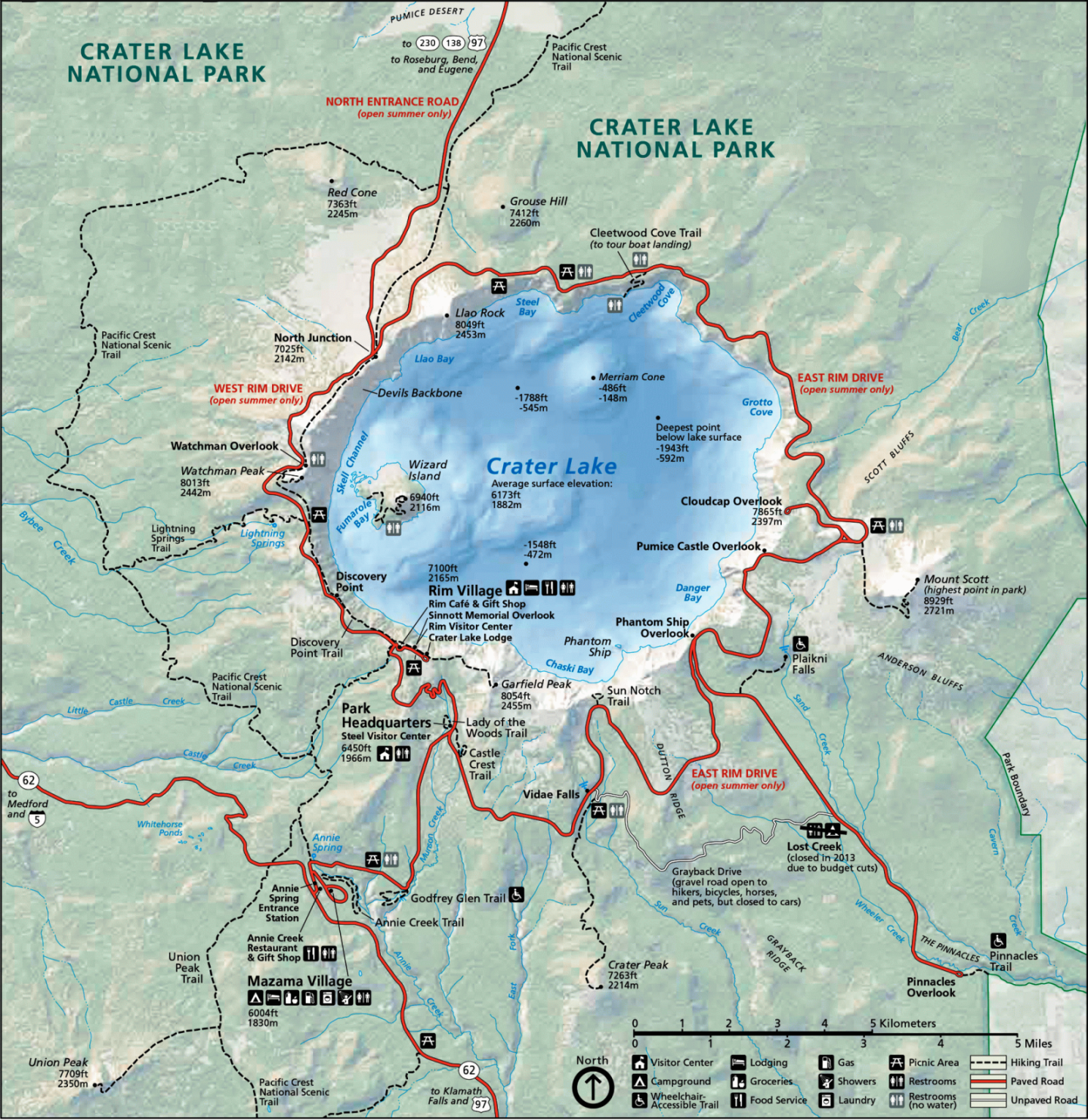 Flora –
In Crater Lake National Park, 680 different plant species have been identified, 4 of which are rare or endangered and 49 which are not native to the place.
Around the picturesque deep blue lake are over 180,000 acres of forests, meadows, wetlands and pumice fields. Together, these create the vegetation of the National Park which rises from 1216 to 2720 meters. The park supports, as mentioned, 680 different species of plants that thrive despite a short growing season and the challenge of surviving in soils derived from porous pumice and volcanic ash.
In this park wild flowers grow which form delicate spots of color in the higher altitudes, while in the lower ones they grow abundantly along rivers, streams and hills. The tallest trees are found along the park boundary, while the older trees hug the edge of the caldera. Rare plant species of interest for conservation are protected within the area.
The introduction and spread of invasive plant species is a continuing threat to the Park’s biodiversity. Through revegetation and management of invasive species, the park’s botanists are restoring the disturbed areas to their natural condition.

Fauna –
As far as animals are concerned, there are 74 species of mammals, 158 of birds, 13 species of amphibians, 7 of reptiles and 5 species of fish of which only one is native.
157 species of phytoplankton and 12 zooplankton have been identified in the lake and this low diversity depends on the low level of nitrogen present in the lake.
There are also colonies of bacteria on the bottom near the last two hydrothermal springs in the lake.
Mammals, birds and insects, however, make up the majority of the animals living in the park. Native and some invasive fish species occupy many of the streams. Amphibians live in wetlands, streams, ponds, and along the shore of Crater Lake. Some reptile species thrive on Wizard Island and in arid habitats.
The most common animals seen around Rim Drive, which is a scenic highway in Crater Lake National Park, are golden-coated squirrels, Canadian jays, and an assortment of butterflies and bees. Sightings of black bears are most common in the fall and late spring, when the animals are waking up or preparing to hibernate. Tracks of American marten, snowshoe hare and Douglas squirrel are abundant in the winter snow. Melting snow and changing temperatures signal animal migrations, hibernation and seasonal foraging.
While these animals are commonly seen along Rim Drive and popular trails, visiting other areas may provide better opportunities to enjoy the sights and sounds of a wider variety of wildlife. Animals (amphibians, birds, invertebrates, mammals, reptiles, and fish) may be most prominent around some of Crater Lake National Park’s unique and less visited landscapes such as Sphagnum Bog, Union Peak, Panhandle, Boundary Springs, and Desert Creek Research Natural Area.