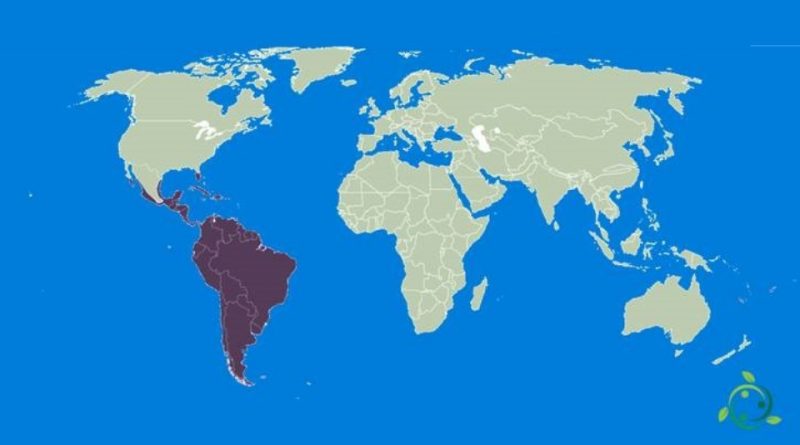 The neotropical ecozone, also known as the neotropical or Neotropic region, is one of the seven ecozones into which the earth’s surface is divided.
This ecozone includes all of South America, the islands of the Caribbean, Central America, southern Mexico and a large part of the coastal regions of Mexico, southern Florida. Relations with other ecozones are limited to the Neartic, Antarctica and Australasia.
The Neotropical Ecozone extends over an area of ​​19.0 million km2 and embraces all latitudes, extending from the Tropic of Cancer to the Antarctic Circle.
Due to its differences in latitude, the neotropical ecozone sees all terrestrial biomes represented, with the exception of the tundra and taiga, whose presence is limited to high altitudes.
The most representative biome of this ecozone, however, both by extension and by importance, is the tropical rainforest, also incorrectly called the “Amazon rainforest”, which extends from Yucatán to Brazil.
Unfortunately, the Amazon forest is today, even more than in past times, seriously threatened by anthropogenic expansion and deforestation and its progressive reduction represents one of the most important issues of ecology, as climate change is associated with it.
Among the other characteristic biomes we mention: the mangrove – which extends over a large part of the tropical coastal regions; the tropical prairie; the tropical bush and the tropical park forest that identify with the savannah of the American continent.

Less configured than the more famous African savannah, the American one has a conventionally more fragmented extension and takes on different names according to the region; the most representative formations are the llano of the Orinoco basin (Colombia and Venezuela) which have a natural continuity with the Guiana savannah, the sertão, which extends into the northeast of Brazil, the cerrado, which includes much of the territory of Brazil east of the Amazon and Mato Grosso, the Gran Chaco, which extends into eastern Bolivia in part of Mato Grosso, western Paraguay and northern Argentina.
These biomes are those most affected by anthropogenic expansion, agriculture and desertification. The only primary desert represented in the Neotropic is located in northern Chile and constitutes the area with the lowest annual rainfall on the planet. However, other regions are affected by desertification due to the degradation of the savannah and in particular the areas of northeastern Brazil.
Going south of the Neotropical Ecozone, the most representative temperate biome is the prairie, commonly known as the pampas, which extends over most of the flat regions of Uruguay and Argentina, up to Patagonia. The forest biomes are instead represented by areas of limited extension along the Andes mountain range. Of particular interest, even if of limited extent due to the morphology of the region, are also the Mediterranean biome and the temperate rainforest, both located in Chile.
The Neotropical Ecozone is characterized, in particular, from a naturalistic point of view by the biodiversity of the neotropical region, associated with the particular extension of tropical biomes, especially forest ones. The tropical regions of this eco-zone are in fact among the least known on the planet. However, the biodiversity of the temperate regions is no less important, as it includes a high number of endemics associated with the geological history of Patagonia. This region, derived from the fragmentation of Gondwana, has maintained connections with the subcontinents of Oceania during the glaciations, therefore it is particularly interested in the phylogenetic relationships with the flora and fauna of New Zealand and southeastern Australia. Some circumantarctic paleoendemisms, at the genus or family level, of clear Gondwanic origin, also involve the southern regions of Africa.