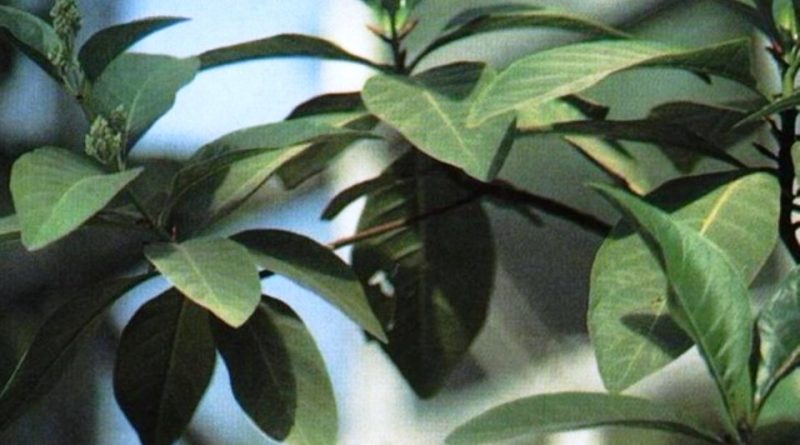 The Peruvian cinchona (Cinchona ledgeriana Wedd.) Is an arboreal species belonging to the Rubiaceae family.

Etymology –
The name Cinchona derives from Ana de Osorio, countess of Cinchon and wife of the viceroy of Peru, who according to legend discovered on herself the virtues of cinchona bark, recovering from malarial fevers and deciding to import it to Europe (1639).
The specific Ledgerian epithet was attributed in honor of Charles Ledger (1818-1905), an English adventurer who for almost 50 years exported plants and animals from Peru, Australia and Bolivia.

Geographic Distribution and Habitat –
Cinchona ledgeriana is a plant native to western South America and, in particular, to Bolivia and Peru.
Its habitat is represented by the cool, humid mountain regions and Andean rainforests between 1,500 to 3,000 meters.
The seeds collected by C. Ledger were subsequently planted in India and Java. 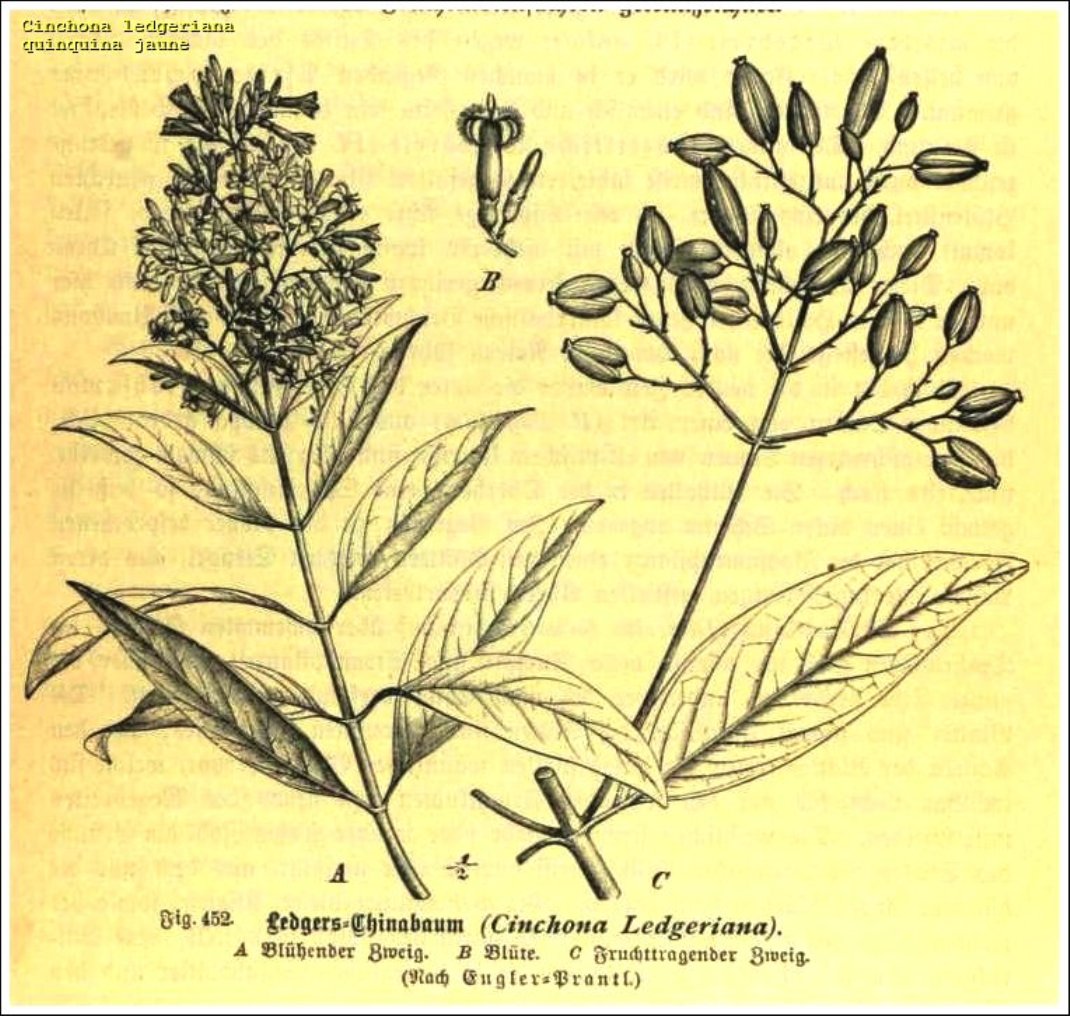 Description –
Cinchona ledgeriana is an evergreen tree that grows up to 6 – 8 m.
It has large glossy leaves.
It has a wrinkled, gray-brown or whitish bark.
The flowers are white-pink, collected with a long-tube gamopetala corolla, expanded at the top in 5 lobes with white cilia at the edges. The fruit is a capsule (size 8-10 cm) of rusty color.

Cultivation –
Cinchona ledgeriana is a plant of the humid tropics, where it is found at altitudes between 1,500 and 3,000 meters.
It grows best in areas where annual daytime temperatures are between 17 and 24 ° C but can tolerate 7 – 28 ° C.
It does not tolerate temperatures below 5 ° C.
It prefers an average annual rainfall of between 2,500 and 3,000 mm, but tolerates 1,400 – 3,800 mm. Requires well-drained, moist soil and a location in full sun or partial shade.
It grows poorly or not at all on land that has been exposed to fire. It prefers a pH between 5 and 6, tolerating 4.5 – 6.5. Plants start flowering after 3 – 4 years and are uprooted and harvested after 8 – 12 years.
On commercial plantations, trees are sold when they are around 6 years old.

Customs and Traditions –
This cinchona, like other plants of the genus, has a long history of use by the natives, especially as a treatment for fevers and malaria.
Modern research has shown that it is a very effective treatment for fever, and especially as a treatment and prevention of malaria.
The bark contains various alkaloids, in particular quinine and quinidine. Up to 70 – 80% of the alkaloids contained in the bark are represented by quinine.
The bark is bitter, astringent, tonic, febrifuge, relaxes spasms, is anti-malarial (due to quinine) and slows the heartbeat (the alkaloid quinidine).
The bark is made into various preparations, such as tablets, liquid extracts, tinctures and powders. It is used internally in the treatment of malaria, neuralgia, muscle cramps and cardiac fibrillation.
It is an ingredient in various patented cold and flu remedies.
The liquid extract is useful as a cure for drunkenness. It is also used as a gargle to treat a sore throat.
However, care must be taken in using this herb as excess can cause a number of side effects including cinchonism, headaches, rashes, abdominal pain, deafness and blindness.
The drug, especially in the form of the quinine alkaloid extracted, is subject to legal restrictions in some countries.

Preparation Method –
Quinine, extracted from the bark of the tree, as well as for medicinal uses, is used as a bitter aroma in tonic water and carbonated drinks.