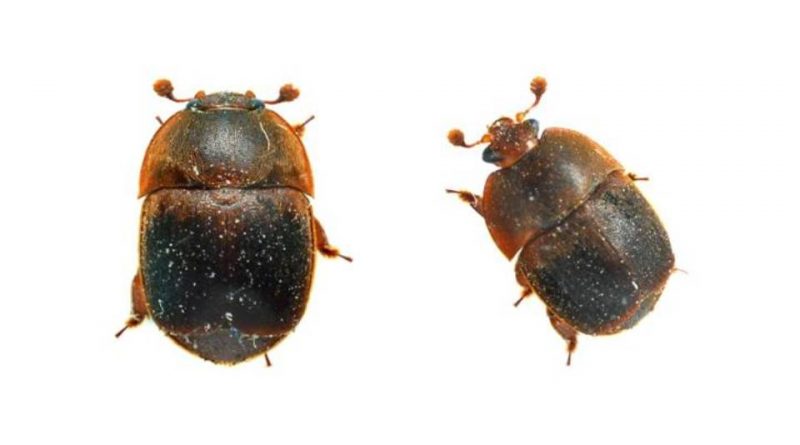 The small hive beetle (Aethina tumida Murray, 1867) is an insect belonging to the Nitidulidae family.

Geographic Distribution and Habitat –
The small hive beetle is a small beetle native to South Africa where the cape bee is the only subspecies of Apis mellifera that does not seem to be affected by its presence and with which it shares the range of origin. This is because the workers of this subspecies are very aggressive with the insect which, however, can parasitize only very weak families or stored honeycombs.
Outside of South Africa, it caused extensive damage to North American beekeeping in the late 1990s.
In Italy its presence was confirmed for the first time on September 5, 2014 in the municipality of Gioia Tauro (RC), in an apiary of the Agricultural University located in Sovereto (Reggio Calabria).

Morphology –
Adults of Aethina tumida measure from 5 to 7 mm in length and have a width of 3 – 4.5 mm; these are light in color just after birth and then become dark brown which can turn black with the aging process.
The egg of this beetle is slightly smaller than that of bees, which it still resembles, with a light mother-of-pearl color and dimensions of about 0.26 mm in width and 1.4 mm in length.
The larvae resemble those of the wax moth (Galleria mellonella (Linnaeus, 1758)) from which they are distinguished by the presence of three pairs of legs longer than the norm, they are whitish in color and measure 10-11 mm in length.

Attitude and Life Cycle –
The females deposit their eggs in the interstices of the hive and at the bottom of the empty honeycombs: usually the eggs appear as disordered clusters.
These irregular clusters of eggs hatch in 2-3 days and small white larvae emerge from them that will grow to 10-11mm.
After feeding on honey, pollen and eggs, the larvae destroy the honeycombs, deposit feces, weaken and collapse families and migrate outside the hive in the form of a pupa that buries itself until it becomes an adult, re-emerges from the ground and fly back to other hives. These take 10 to 16 days to mature. The larvae ready to pupate leave the hive and pupate in the ground near the hive, at a depth of 1-30 cm. The pupal period lasts about 3-4 weeks.
New adults look for other hives, and females usually mate and begin laying eggs about a week after transitioning into adulthood. Beehive beetles can have up to 4 or 5 generations a year during warm seasons.
Adults can live up to 6 months and can be seen almost anywhere in a hive, although they are often found in the back of the hive’s lower edge.

Ecological Role –
The massive presence of Aethina tumida can cause damage to the combs and the loss of honey and pollen, leading to the extreme consequence of the loss of the family. In cases where the infestation reaches considerable proportions it can cause the swarming of the family. It can also damage stored combs and honey not yet extracted. In addition, the larvae dig tunnels in the honeycombs where they eat and defecate, causing the honey to ferment.
In summary, the damage caused by these insects are the following:
– the tunnels of the larvae through the combs containing pollen or honey, damage or destroy the combs;
– the feces of the larvae in honey make it change its color;
– the activity of the larvae causes fermentation and foam in the honey; honey takes on a characteristic smell of rotten oranges;
– damage and fermentation cause honey to escape from the combs, damaging the entire hive.
The small hive beetle, for what has been said, is considered a secondary problem in South Africa, and therefore, it is not subject to particular preventive controls. The insect is often found in weak or collapsing hives, and rarely afflicts the strongest hives. The lesser adaptation of bees of European origin compared to South African bees must be attributed to the co-evolution of the two species.
To make a careful diagnosis, a meticulous visual examination of the combs, cracks and irregularities inside the hive must be carried out, focusing attention on the darkest and most difficult to reach places.
The Aethina tumida, in fact, shuns the light so much so that one of the most tested techniques for the diagnosis and removal of the cable cover, its placement in an inverted position on the ground and the superimposition on it of the super that must be left like this for about a minute; lifting it suddenly you will notice the adult beetles, if present, which move rapidly on the bottom looking for escape in the sudden presence of light. Excluding the possible presence of parasites in the supers, for the correct diagnosis it is advisable to continue the inspection in the nest, removing the brood combs one at a time and observing the surface to discover both adults and larvae settled in the uncapped cells. Finally, the inspection will have to focus on the bottom of the nest and in particular on the corners where the insect loves to take refuge and protect itself.
In the United States, where the damage caused by the presence of this small beetle has been enormous, the use of Paradichlorobenzene (PDB) has been authorized in order to protect the empty honeycombs. In addition, some insecticidal substances have been approved for use in hives for the control of the small hive beetle in emergency conditions. Disinfestation, also carried out by placing specific nematodes on the ground, is normally carried out near the hive by hitting the insect in the pupal state. In small apiaries it can be a contrast to the parasite to keep hens scratching among the hives.