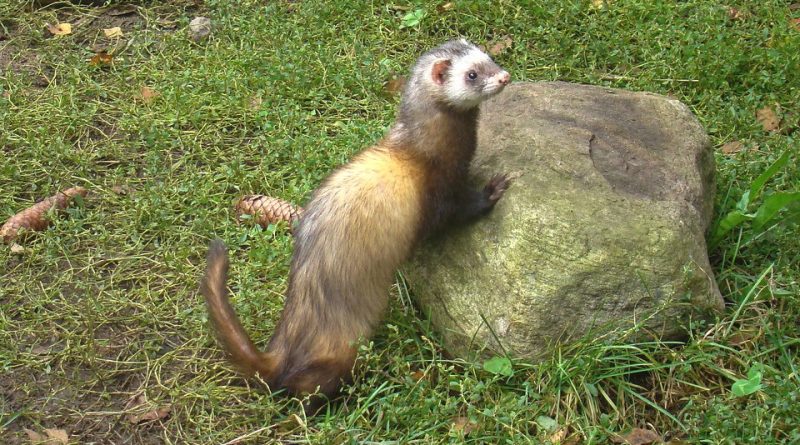 The European polecat (Mustela putorius, Linnaeus 1758) is a mammal belonging to the Mustelidae family.

Geographic Distribution and Habitat –
Mustela putorius is a species present and widespread throughout Europe but absent in Iceland and in the north of Scandinavia, while it reaches as far north as southern Sweden and southern Finland; on the other hand, it is missing on the Adriatic side of Croatia and in Greece, while it is found, although very rare, in Great Britain.
In Italy it is present everywhere except in Sicily, Sardinia and smaller islands.
It was also introduced in New Zealand in the 19th century, where it successfully settled at the expense of local fauna.
The skunk is a mammal that adapts to a wide range of habitats; it is found in fact from the sea coasts to the mountains, and it lives equally at ease among the sandy dunes or on the cliffs overlooking the sea, as well as in the prairies or in the wooded gorges. However, its preferential habitat is represented by wet areas, such as the banks of rivers and pools or in any case areas close to water sources. 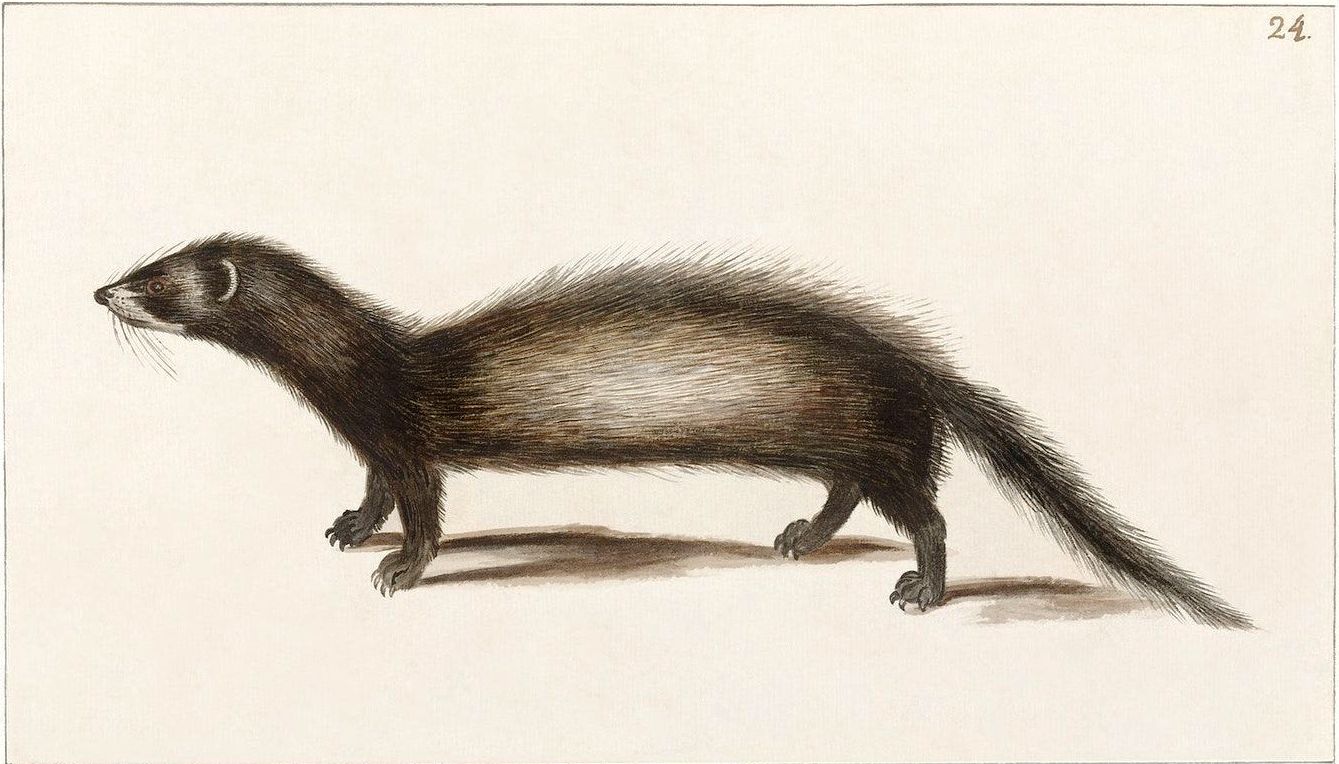 Description –
The European polecat is a mammal with a body length of 50-60 cm, with a tail of 12.7-19 cm, for a weight of 500-1200 gr and even more but exclusively for the male specimens.
It is recognized for its slender shape, short limbs, thick tail, darker brown dominant color in the extremities. The muzzle is characterized by a characteristic fawn-whitish mask.
The head is massive and rounded, with a characteristic mandibular conformation, almost sealed to the rest of the skull which gives the animal an exceptional grip during the bite.
The hair, sparse and bristly in summer and thick and silky in winter, is dark brown on the back, with a tendency to darken as it goes towards the ventral area, which, like the legs and tail, tends the black color: there is also a thick cream-colored undercoat, the presence of which is particularly evident on the sides of the animal. The head, also black, has white or cream-colored designs on the ears, muzzle and cheeks that form a curious mask around the eyes.
The characteristic mask does not appear before three months of life.

Biology –
In this mammal the mating season falls during the winter: the males (who often fight each other to win the right to mate with the female) during the copulation grasp the nape of the females with their teeth, shaking them vehemently.
After mating, the female is able to delay implantation of the fertilized egg on the uterine walls for several weeks: for this reason, even if mating takes place in winter, the cubs are usually born in April-May.
The gestation period lasts approximately 40-43 days, after which 3-8 puppies are born and remain blind for the first 30-36 days; they are also deaf and covered with a sparse whitish fur, while the skin is pink in color.
The female, when near the birth, begins to line her nest with dry grass and hair to make it more comfortable. The puppies are weaned around the month of age: the female, however, continues to look after them until they reach adult size (around the third month) even if the puppies cannot be said to be sexually mature before the age of six months but rather independent.
The female usually gives birth only once a year: if however, for some reason, the brood does not survive, she can go into estrus again to replace it.

Ecological Role –
The Mustela putorius is a carnivorous mammal that looks like a solitary hunter who grabs the prey from behind and kills it; if the latter is of considerable size, it is covered with foliage and will be consumed the next day.
When darkness falls, the animal goes out in search of food, moving quickly on its short legs (which during walking are moved like a glide): the skunk moves mainly on the ground, as it is much less apt than other mustelids. (in the first place the stone marten and the marten) to climbing and moving among the foliage.
This species is a purely carnivorous animal that feeds mainly on rats, mice and rabbits, birds and their eggs, frogs, lizards and snakes.
The European polecat identifies its prey thanks to its highly developed sense of smell which, once reached, bites the neck, clenching its jaws so tenaciously that it is possible to lift the animal in the air together with its prey without it loosening its grip. In this way, skunks are right even for animals of much larger size, such as large rabbits. Skunks carry small prey by grabbing them mid-back, much like hunting dogs do when bringing back game.
Although purely carnivorous this species, if food is scarce, it can fall back on invertebrates or feed on berries and fruits, even if it is much less apt than its relatives Canids and Ursids to digest these types of food, and therefore it feeds on them only in cases exceptional.
It is an animal with a very aggressive character if it is attacked it reacts promptly by biting promptly and emitting a fetid liquid from the anal glands.
The species hunts both at night and during the day, very shy it is very difficult to see. In its natural habitat the favorite lairs are rabbit holes, tree cavities, various types of ravines. In populated areas, skunks also use piles of timber or homes as day shelters.
The European polecat is a very solitary and uncommunicative animal and for most of the time it remains silent; however able to emit short yelps or squeaks, while the excited or frightened animal emits from the subcaudal glands the characteristic malodorous liquid for which the animal is so well known.
Unlike what was once thought, this liquid would not have a defensive purpose, but rather a territorial function, as the skunks taken in captivity do not emit almost all the annoying odor. In addition to their own smell, skunks usually leave their faeces as a warning sign for other specimens along the routes that the landlord usually travels, taking care to deposit their droppings in strategic places.
As regards its population in its habitats and in Italy this mammal is in slight decrease which could be linked to the degradation to which many watercourses and many wetlands have been subjected (AM De Marinis, P. Genovesi & M. Spagnesi in Spagnesi & Toso 1999). Despite the legal protection, the species is still subject to poaching with traps and poisoned baits. Road traffic, illegal harvesting through traps or poisons, pesticide poisoning are some of the threats that affect the species (P. Genovesi & A.M. De Marinis in Boitani et al. 2003). Since Ferret and Polecat are inter-breeding, the presence of re-wild populations of ferrets represents a potential threat to the conservation of the Polecat due to the risk of genetic pollution.
Among the conservation measures it is recalled that this species is listed in Annex II of the Bern Convention (1979) and in Appendix V of the Habitats Directive (92/43 / EEC). In Italy it is protected by the law 157/92 on hunting. It is present in protected areas. Least Concern assessed by the European Mammal Assessment (Temple & Terry 2007). The scarce knowledge on the ecology of this species does not allow to define a strategy for its conservation, which appears to be linked to a more effective protection and recovery of suitable habitats (AM De Marinis, P. Genovesi & M. Spagnesi in Spagnesi & Toso 1999).