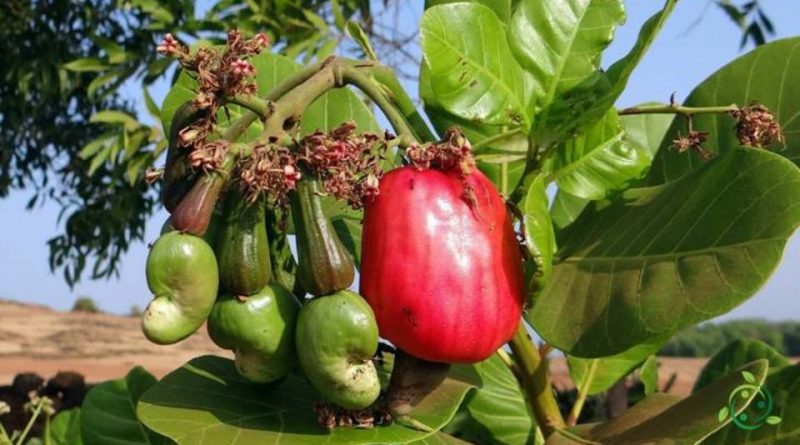 The cashew nut (Anacardium occidentale L., 1753) is an arboreal species belonging to the Anacardiaceae family.
This plant is cultivated for the production of its nut, the cashew, and its false fruit, called maragnone (from the Spanish marañón, derived from the Brazilian state of Maranhão, of which it seems to originate) or cashew nut (from the Portuguese cajú).
The cashew tree is a tropical tree that tolerates temperatures between 5 ° and 45 ° C and dies totally in case of frost, and that is why in Italy it cannot be cultivated except in particular conditions or areas of the islands. .
It produces on average 15-30 kilograms per year.
For its cultivation, therefore, it is necessary to take into account the optimal climatic conditions.
What we consume at the table is the dry part of the fruit. The fresh part is actually a false fruit, as it is a modification of the flower. The cashew apple is characterized by a smooth skin and a yellow-red color.
However, in producing countries, the false cashew fruit is equally consumed and used in culinary preparations.

The cashew tree can reach up to 14 meters in height, 6 if grown in the dwarf variety.
The cashew tree finds its best lodging in sandy soil with an acid pH, although it still manages to adapt to many soils, even if not very fertile, if well fed with fertilization.
The cashew nut does not require additional irrigation, compared to the typical tropical rains that already perform this task.
The rains could damage the flowers, which are often subject to rot. It would be ideal to be able to protect them from this threat.
Furthermore, the tree does not require particular fertilization, if the soil in which it is planted is not difficult and infertile.
Please remember that the cashew tree reproduces by sowing and grafting.
Sowing is still the most widespread technique and takes place directly in the ground where the climate allows it.
If well irrigated, the plant has a very fast growth up to the bud; for the production of fruits they usually spend from 3 to 5 years, and then survive for another 50.
Finally, as regards the grafting technique, it is a possible but not widespread practice, due to the difficulty of finding nearby cultivars.