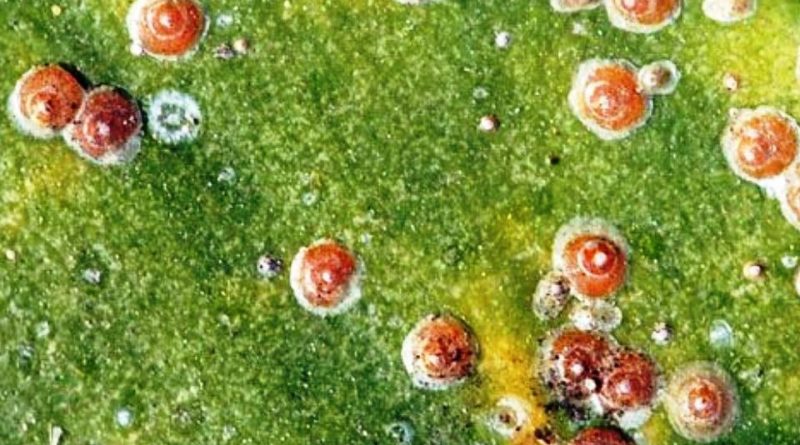 The strong white-red cochineal of citrus fruits (Aonidiella aurantii Maskell, 1879) is a rincote homopterous insect belonging to the Diaspididae family.

Geographic Distribution and Habitat –
Aonidiella aurantii is a cochineal native to Southeast Asia from where it then spread to all citrus-growing areas of the world.
In Italy it is present in the southern regions and especially in Sicily.
It is a polyphagous species, which lives preferably on citrus fruits, in particular lemon, but is also found on other fruit trees (carob, fig, almond, apple, pear, plum, Japanese medlar, grapevine, etc.) and on various ornamental plants (rose, laurel, cycas revolt, ivy, privet, pittospore, oak, etc.).

Morphology –
The Aonidiella aurantii is a cochineal with sexual dimorphism with the females having a follicle of about 2 mm of diameter, round and of a hazel-reddish color; the exuviae are central and darker. The males, of smaller dimensions, have a follicle of about 1 mm in length, oval and light brown in color.
In the adult stage the male is winged and yellowish in color.

Attitude and Life Cycle –
The Aonidiella aurantii overwinters in various stages of development; in fact in the environments with warm and dry climates, it completes up to four generations a year which overlap each other. The first generation starts in early May until the end of July, the second runs from the first decade of July to the end of August, the third starts in late August until early September and early November and the last one goes from November to May of the following year.
The females, in the spring period, which have been fertilized by the winged males, whose life is limited to about one day, give birth to active nymphs after a few hours or lay on average a hundred eggs with completed embryonic development, from which the nymphs immediately hatch (ovoviviparous species).
The 1st age nymphs, after a short mobile phase in which they can also be transported by the wind to other plants, attach themselves to the substrate and begin to feed.
The Aonidiella aurantii infests branches, leaves and fruits, especially of the Lemon in which it causes damage similar to that of other Cochineals: leaf yellowing, phylloptosis and general deterioration of the plant; furthermore, the affected fruits drop prematurely and are heavily depreciated. Furthermore, the particularly affected branches show cracks in the bark, following the insect bites.

Ecological Role –
The Aonidiella aurantii, with its activity, in the case of high infestations, in addition to the damage to citrus plants, causes a depreciation especially in the fruits of lemons.
In fact, the presence of cochineal in greater numbers than about 10 individuals per fruit determines a commercial depreciation of the fruits.
The balance of the populations of this cochineal are determined by various factors such as:
– careful design of citrus or other fruit trees taking into account the avoidance of excessive specialization, too narrow sixths, inefficient pruning, excessive use of nitric fertilizers, lack of hedges, excessive tillage of the land with lack of turf, etc.
– treatments with insecticides or other biocides that eliminate the biocoenosis of other insects such as pollinators, predators and parasites of this cochineal.
Aonidiella aurantii is in fact limited by many natural enemies such as:
– Predators: Chilocorus bipustulatus (L.) (Coleoptera: Coccinellidae);
– Parasitoids: Aphytis melinus De Bach, Aphytis lingnanensis Comp., Aphytis coheni De Bach, (Aphelinid Hymenoptera) (Ectophages), Compariella bifasciata How. ((Encirtidae Hymenoptera)
– Entomopathogens: Cephalosporium lecanii Zimm.
The fight against this cochineal must preliminarily follow careful agroecological criteria to bring the populations back within the damage thresholds.
In the past years there was a massive use of insecticides, albeit with guided and integrated control criteria. These are remedies that are necessary due to the design error of an old generation of citrus groves.
However, the fight must include, in addition to the criteria to be followed on a good aeration of the tree tops, a reduction of dust on the leaves, the elimination of nitrogen fertilizers of nitric origin, larger sixths, the interruption of plots with other species for increase company biodiversity, with washing to be performed on the nymphs when the intervention thresholds are exceeded; these have been estimated, on a sample of 10% of the plants, in:
– 1 female per cm of branch on a sample of 4 branches (10 cm long) per plant;
– 4 females per fruit out of a sample of 20 fruits per plant.
The sampling must be carried out starting from the end of winter, first on the twigs and then on the fruits.
The products to be used are white oils possibly activated with Marseille soap or other natural products every 10-20 days depending on the level of infestation and the progress of the generations of nymphs.
For this Diaspino, the pheromone has also been isolated, which makes it possible to follow the evolution of the population by monitoring it with sex traps, installed in spring.
Furthermore, it is good to frequently integrate biological interventions such as:
– launches of the aphenylid hymenoptera Aphytis melinus to increase the natural biological control exerted by parasitoids and predators, especially after unfavorable conditions for the useful entomofauna have occurred (frosts, high temperatures, non-selective chemical treatments). To program both launches and treatments, a pheromone trap must be placed at the beginning of March for a homogeneous plot. The trap intercepts the flights of mature wintering males for mating with the virgin females of the cochineal. The winged male of the cochineal is recognized from other insects by the length of the antennae which exceeds that of the body and by the typical transverse band. At the first catches the flooding launches of A. melinus begin: 50,000-100,000 insects / ha, divided into 5-6 interventions, of which at least 50% during the spring flights of the males. At each intervention about 5,000 insects are released per 100-120 plants (20,000 / ha).